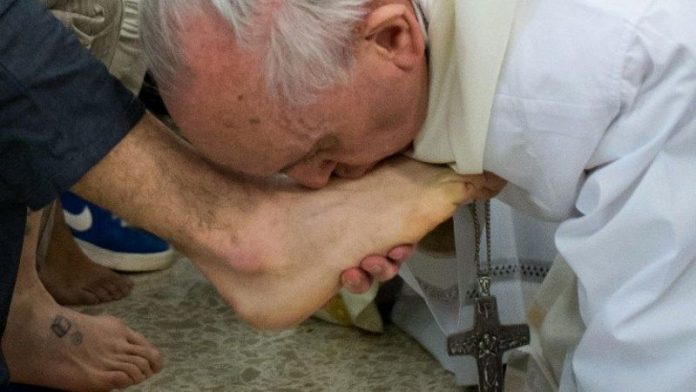 The procession included prayers for peace in a Middle East "torn apart by injustice and conflicts".

The new pontiff was to recite the Passion of Christ – the story of the last hours of Jesus's life – in St Peter's Basilica starting at 4pm before the Colosseum ceremony from 8pm GMT.

The ceremonies come after a mass in a youth prison on Thursday in which the pope washed the feet of 12 inmates including two Muslims, an unprecedented version of a traditional pre-Easter ritual.

Latin America's newly elected first pontiff has set a markedly different tone from his predecessor Benedict XVI, with a more open and informal style that is unusual in the Vatican halls of power.

He is expected to take part in Friday's procession and even carry the wooden cross representing Jesus Christ's crucifix on his shoulder part of the way.

The 2 000-year-old Colosseum is used as a backdrop for the ceremony because of the belief that Christians were martyred there in Roman times even though there is no evidence of this.

Prayers
The meditations read out during the procession were written by a group of Lebanese young people chosen by the Maronite Patriarch Bechara Rai.

"Come, Holy Spirit, to console and strengthen Christians, especially those from the Middle East so that, united in Christ, they may be witnesses of your universal love in an area torn apart by injustice and conflicts," reads one of the prayers.

Another refers to the conflicts "which in our days devastate various countries in the Middle East". "Let us pray that the displaced and the forced migrants may soon return to their homes and lands."

The Vatican has been concerned over the fate of Christian minorities in many parts of the Middle East amid a rise in radical Islam, as well as calling for an end to conflict in the region.

Good Friday is the second of four intensive days in the Christian calendar culminating in Easter Sunday, which commemorates Christ's resurrection and is the holiest day for Christian believers.

On Saturday evening, the pontiff will take part in an Easter vigil in St Peter's Basilica. The Vatican has said he will baptise four adult converts to the Catholic Church during Saturday's service – an Albanian, an Italian, a Russian and a US national of Vietnamese origin.

Breaking with tradition
​On Sunday the Vatican's first non-European pope in nearly 1 300 years will celebrate Easter mass in front of tens of thousands of pilgrims in St Peter's Square and then pronounce the traditional "Urbi et Orbi" blessing to Rome and the world.

On Holy Thursday, Francis washed and kissed inmates' feet at a prison in Rome – the first time a pontiff had performed the ritual in a prison, and the first time it included women and Muslims.

"Whoever is the most high up must be at the service of others," Francis said at the mass in the Casal del Marmo youth prison.

The ceremony is usually held in a basilica in the city centre and commemorates the gesture of humility believed to have been performed by Jesus for his 12 disciples at their last meal. Popes performing the ritual have usually washed the feet of priests.

Francis has already broken with several Vatican traditions, although he is yet to begin tackling the many problems assailing the Roman Catholic Church including reform of the scandal-ridden Vatican bureaucracy and bank.

The former archbishop of Buenos Aires, Jorge Mario Bergoglio, was known in Argentina for his strong social advocacy during his homeland's devastating economic crisis, his own humble lifestyle and his outreach in poor neighbourhoods. AFP