Nicklaus: I expect Tiger Woods to beat my record 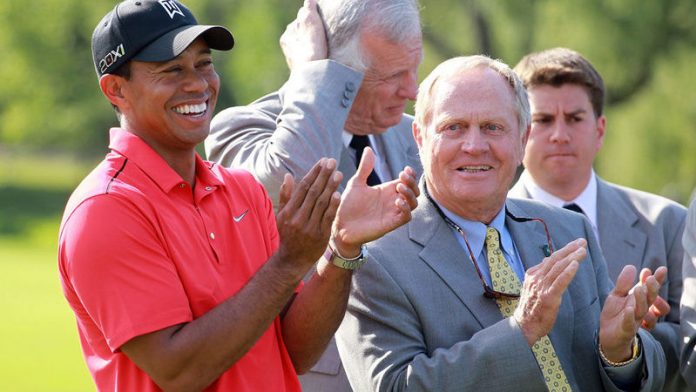 Speaking just before both of them attended the Champions Dinner at Augusta National, the 73-year-old golf legend, who holds an all-time record of 18 major titles and won six Masters titles, said he still thinks 37-year-old Woods will break his career record.

"I've said it, and continue to say, that I still expect him to break my record," Nicklaus said. "I think he's just too talented, too driven and too focused on that."

Woods has won six times in the past 12 months, including titles already this year at Torrey Pines, Doral and Bay Hill.

But while he has shown flashes of the form that allowed him to dominate the sport for years, Woods has not won a major title since the 2008 US Open and has not won a Masters since capturing the fourth of his career back in 2005.

"He has played very well this spring," Nicklaus said. "I think if he wins here that it would be a very large step toward regaining the confidence, in that he has not won a major in a while.

'A pretty good career'
Woods is on pace with Nicklaus after having been ahead of the legend's major victory pace for several years. Another victory this year would put Woods back on record pace.

Asked if this summer's three other majors were extra important in Woods's quest since boyhood to win at least 19 majors, Nicklaus replied, "I would have thought every summer was."

"Obviously the older he gets and if he doesn't win, it makes my record move out further," Nicklaus said.

"From this point, he has got to win five majors, which is a pretty good career for most people to start at age 37."

Only 18 men in golf history have won five majors in a lifetime, and Woods and Nicklaus lead that pack. Nicklaus won his last major at age 46 at the 1986 Masters.

Nicklaus was not as worried about Woods not having won at Augusta National since 2005 because he has contended in almost every season since.

"A career is not made over a couple years. I don't think it's any big deal," Nicklaus said. "I'm sure he does." – AFP