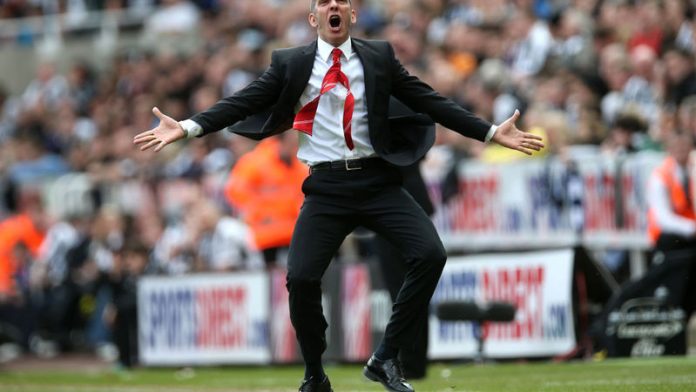 Di Canio, who replaced Martin O'Neill two weeks ago and saw them beaten in his first match in charge last week at Chelsea, celebrated their goals from Stephane Sessegnon, Adam Johnson and David Vaughan with an outpouring of emotion.

He leapt in the air, did a series of arm pumps, ran down the touchline and slid along the ground in his suit as Sunderland won at St James' Park to end a nine-match winless streak and record their biggest win at Newcastle since October 1966.

The victory moved them up from 17th to 15th in the table, above Stoke City who play league leaders Manchester United on Sunday.

It was also their first win at Newcastle since November 2000 and was thoroughly deserved because they were sharper and more clinical than their opponents.

Sessegnon opened the scoring with a low shot after 27 minutes, Johnson made it 2-0 with a left-foot curler after 74 and Vaughan put the icing on the cake with a stunning half-volley with the outside of his left boot with eight minutes remaining.

The second and third goals came after Newcastle keeper Tim Krul had suffered an elbow injury and was replaced by substitute Rob Elliott, but no goalkeeper could have realistically saved either effort.

The result kept Newcastle on the fringes of the relegation battle, in 13th place on 36 points from 33 matches. Sunderland moved up to 34 points, three clear of FA Cup finalists Wigan Athletic.

Queens Park Rangers and Reading, who both have 24 points, occupy the bottom two places in the table. – Reuters