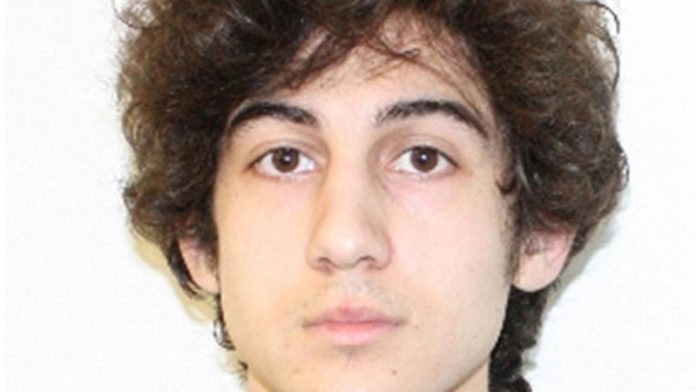 The ethnic Chechen college student, Dzhokhar Tsarnaev (19), whose tongue was injured in a gunshot to the throat before his arrest, was initially under sedation and incapable of being interviewed by investigators, authorities said on Sunday. He also had been shot in the leg.

But the ABC and NBC news networks reported late on Sunday that Tsarnaev had regained consciousness and was responding in writing to questions put to him by authorities, who are seeking to determine if the suspects they have identified acted alone.

Much of investigators' attention has focused on a trip to Russia last year by his older brother and fellow suspect, Tamerlan Tsarnaev, who is now dead, and whether Chechen separatists or Islamist extremists may have influenced or assisted the siblings.

The two brothers emigrated to the United States a decade ago from Dagestan, a predominantly Muslim region in Russia's North Caucasus mountains.

They are accused of planting and setting off two homemade bombs near the crowded finish line of the Boston Marathon last Monday, killing three people and injuring more than 170 others.

Hit by gunfire
Tamerlan Tsarnaev (26) died after a gunfight three nights later with police on the streets of Watertown, the Boston suburb where authorities finally cornered his younger brother, ending a massive manhunt that shut down much of greater Boston on Friday.

Dzhokhar Tsarnaev, a naturalized US citizen, was found spattered with blood and hiding inside a covered boat parked in a Watertown back yard on Friday evening.

He apparently was hit by gunfire in the shootout that left his brother dead the day before, but it was not clear whether he suffered additional wounds in a final hail of bullets that preceded his capture.

Tsarnaev was shot in the throat, US Senator Dan Coats, a member of the intelligence committee, told ABC. A source close to the investigation told Reuters he had damage to his tongue.

The suspect was placed under armed guard in the intensive care unit of Boston's Beth Israel Deaconess Medical Centre, where his brother was pronounced dead early on Friday.

US attorney Carmen Ortiz, the federal prosecutor for the Boston area, was preparing criminal charges, according to Boston police commissioner Ed Davis. It was not clear when charges would be filed. Prosecutors did not plan any news conference or announcements on Sunday.

Death penalty
Whether prosecutors ultimately decide to seek the death penalty if Tsarnaev were convicted, hinges on various factors such as his age, his apparent lack of a prior criminal history and whether he might have information leading to other suspects, legal experts said.

Photographs of the two brothers, allegedly in the act of planting bombs at the Boston Marathon, were circulated by the Federal Bureau of Investigation (FBI) on Thursday, with an appeal to the public for help in locating the then-unidentified pair.

The suspects surfaced late that night when they allegedly shot a campus police officer to death at the Massachusetts Institute of Technology in Cambridge, then hijacked a sports utility vehicle before opening fire and hurling explosives at pursuing law enforcement.

During this confrontation, according to police, a transit cop was badly injured and the older Tsarnaev, walking toward officers and firing until he ran out of ammunition, was tackled by a police sergeant, only to be struck by the car as his brother sped away.

The younger Tsarnaev later abandoned the vehicle and vanished, leading authorities to impose a lockdown on the city of Boston and its suburbs before he was found and arrested in Watertown some 20 hours later.

Students returning to campus on Sunday at the University of Massachusetts-Dartmouth, where Dzhokhar Tsarnaev was enrolled, recalled seeing him back in the dorm, at class and even working out in the gym a day or two after the bombings before realising he was suspected in the crime.

Later on CNN, Davis said he was "confident" the two brothers "were the two major actors in the violence that occurred".

The men's parents, who moved back to southern Russia, have said their sons were framed.

Runners in the London Marathon observed 30 seconds of silence before starting their race on Sunday, while people from the greater Boston area remembered the victims in church services.

"We must be people of reconciliation and not revenge," Roman Catholic cardinal Sean O'Malley told a packed cathedral of the Holy Cross in Boston. "The crimes of the two young men must not be justification for violence against Muslims."

In the neighbouring city of Cambridge, police stationed themselves across from a home where various members of the Tsarnaev family had lived, advising bystanders to move on.

Patricia McMillan, who lives two doors down, said she last saw Tamerlan Tsarnaev in the neighbourhood the Wednesday before the bombing, noting he had shaved off his beard and that he was smoking.

Trip to Russia
Tamerlan Tsarnaev travelled to Moscow in January 2012 and spent six months in the region, a law enforcement source said.

That trip, combined with Russian interest in Tamerlan communicated to US authorities and an FBI interview of him in 2011, has raised questions whether danger signals were missed.

It was unclear whether or not he had contact with militant Islamist groups in southern Russia's restive Caucasus region.

A group leading an Islamist insurgency against Russia said on Sunday it was not at war with the United States, distancing itself from the Boston bombings.

"We are fighting with Russia, which is responsible not only for the occupation of the Caucasus but for monstrous crimes against Muslims," said a statement from Caucasus Emirate militants operating in Dagestan.

The insurgency is rooted in two separatist wars that Russian troops waged against Chechen separatists following the fall of the Soviet Union.

The brothers spent their early years in a small community of Chechens in the central Asian country of Kyrgyzstan, a mainly Muslim nation of 5.5 million. They moved in 2001 to Dagestan, a southern Russian province where their parents now live.

"They say he was a fanatic. I didn't see that," said Madina Abdulayeva (45), who runs a small grocery shop across the pot-holed street where he used to come to chat. "We're all Muslim here. We're all part of Islam. We all pray." – Reuters