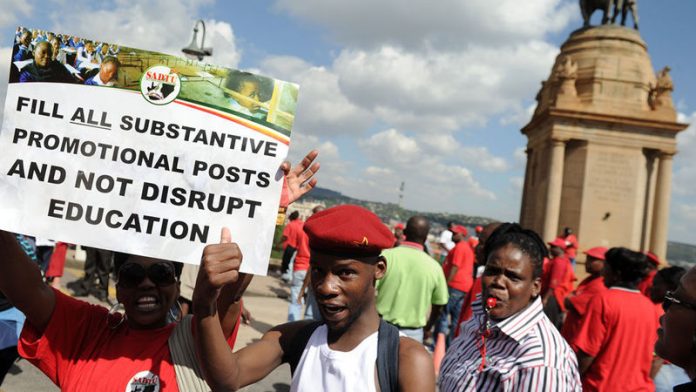 "We are calling for the minister not to even think of that. There is fire already. Don't pour oil on the fire," Cosatu president S'dumo Dlamini told striking South African Democratic Teachers' Union (Sadtu) members at the Union Buildings in Pretoria on Wednesday.

"Principals that do not monitor and register the attendance of teachers will [also] be subjected to disciplinary procedures," said department spokesperson Panyaza Lesufi at the time.

"What we want to see tomorrow is an engagement with Sadtu, saying 'how do we fix the problems?' As the leadership of Cosatu, we are saying to you [protesters], your federation is one federation," Dlamini said on Wednesday.

He told the protesters that Cosatu was undergoing "a painful phase".

"Please do not listen, you do not even want to hear by reading what the newspapers are saying about your Cosatu. I want to assure you that it is not about individuals," he said.

Cosatu affiliates are reportedly divided over accusations of corruption against Cosatu general secretary Zwelinzima Vavi, which are being probed, and which he has denied.

On Wednesday, Dlamini said Cosatu supported calls for the resignations of Motshekga and her director general Bobby Soobrayan.

"We call upon the President [Jacob Zuma] to firstly recall her, then and have a serious discussion with her after sending her elsewhere," Dlamini said.

"We are calling for the president to fire that DG (director general). The education of our children cannot be held to ransom by two individuals. This march today is about quality education in our country."

Thousands of teachers marched from Marabastad, on the outskirts of Pretoria, to the Union Buildings on Wednesday.

"The marches are meant to increase the pressure on … [Motshekga and Soobrayan] to resign from their … positions, in defence of collective bargaining and promotion of quality public education," Sadtu said in a statement.

Sadtu members had been on a national go-slow since pupils returned from the Easter holiday.

"If the government does not listen to the voices of the teachers today, we want to assure them that all of the members in Cosatu, all the 260 000 members in the Western Cape, will come and join you to make sure that we fix the problems in education," he said.

Ehrenreich was addressing close to 2 000 protesters from the back of a truck at the main gates of the parliamentary complex in Cape Town.

Cosatu supported them and their union "without reservation", he said.

Sadtu has prepared a memorandum containing a series of demands, which it plans to deliver to the government.

Ehrenreich said if there was no response to this, "the next time you are on the streets, all of Cosatu will be with you".

"Teaching resources in schools and facilities on the Cape Flats are half those of the schools in the shadow of Table Mountain," he said.

"To Donald Grant, we say… if he dares continue with the closure of schools, we will come to [the provincial legislature building in] Wale Street and we will take him out of those offices, because an attack on our children is an attack on all of us."

In the document, Sadtu gives the government 21 days to respond to its demands. – Sapa