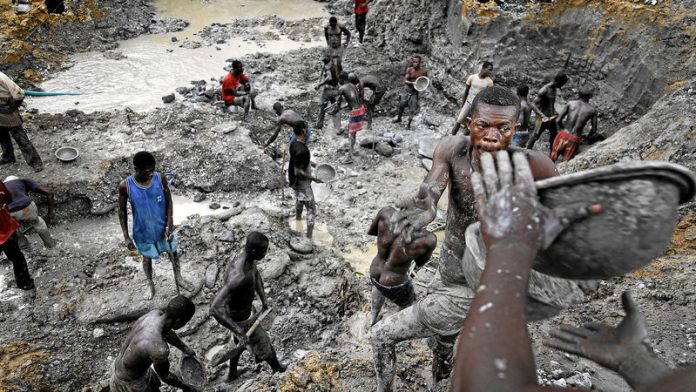 Huang Ren Zhong's striped parasol stands out against the muddy cliff of excavated earth. The horizon is fringed with the tall trees of the Ghanaian rainforest, but for Huang, this dilapidated shelter is his only shade from the sweltering tropical sun. He and his other Chinese colleagues take turns to sit under it, overseeing the digging and churning of the murky water beneath them, where they are mining a huge pit for gold.

Two years ago, Huang (40) left his tea farm in China's Guangzhu province to seek riches here in West Africa. Since then his work has been hot and arduous and, at times, dangerous. But, by his standards, the rewards are great. Huang says he makes about 4 000 yuan — about R6 000 — a month. His salary is paid straight to his family in China, with the money he needs to live deducted first.

"The work is difficult. [But] I came here to make money," said Huang. "In China I was average, or poor. To have the opportunity to travel abroad [and] make money is fantastic."

Huang's mine is one of many illegal small-scale gold mines in Ghana — Africa's second largest gold producer. Ghana's minerals commission, which provides permits for lawful small-scale mining, has not authorised the site. Foreigners are banned from working in Ghana's small-scale mining industry, which was formalised in the late 1980s to indigenise mining and bring much-needed income to the country's poor rural communities.

Figures on the scale of illegal mining are nonexistent and the Ghanaian authorities are struggling to address the problem. But 23% of Ghana's gold production is from small-scale mining and some estimates calculate that 95% of all small-scale mining in Ghana is illegal.

The authorities admit that the influx of Chinese miners and their wealthy backers — who have dramatically increased small-scale mining through their investment in millions of dollars' worth of excavators and equipment — is causing environmental destruction and social conflict on an unprecedented scale.

"The scale [of illegal mining in Ghana] is so vast it is difficult to actually quantify," said Brigadier General Daniel Mishio, chairperson of Ghana's national security commission on lands and natural resources.

"It is a security threat … apart from the security threat that is posed by the weapons that they [illegal miners] wield, we also have issues of human security," Mishio said. "In certain areas people don't get clean drinking water and in some areas you can see that most of the forest cover has been destroyed. This poses a very big danger to our future."

The work is also risky: last week 17 people were killed at an accident at a gold mine in Kyekyiwere in central Ghana. Mishio leads a task force that has been conducting raids on illegal mines. Last month 120 Chinese miners were arrested in a sting operation, one of a number in recent months.

Tensions in Ghana towards immigrants from China — which is Ghana's biggest trading partner — have led Ghana's president to reassure Chinese investors that the West African country remains keen to encourage economic cooperation.

But many blame Ghana's government for failing to prevent the destruction of large swaths of land for illegal mining.

"In Ghana and elsewhere in Africa, small-scale mining is a strategic livelihood alternative for rural communities and it contributes tremendously to the local economy," said Wilbert Brentum, from Solidaridad, which works to improve safety standards and ethical practices in gold mining.

"But in Ghana there is more illegal small-scale mining than there is legal. This has magnified the environmental degradation and polluted so many of our water bodies. Because it has attracted more people into the small-scale mining sector, without protective equipment, fatalities are also on the increase."

Research by one Ghanaian non-governmental organisation found that 250 rivers in mining communities had been polluted by cyanide and heavy metals. This month the government expressed its concern about the rate at which water bodies were being contaminated.

"This [illegal mining] doesn't help us at all," said Kweku Gyaminah, a traditional healer in Manso Abodom, who makes more than £1 000 a week from trading gold mined by villagers — many of them children — on the fringes of the illegal Chinese-run mine operated by Huang and his colleagues.

"Now our drinking water is all polluted, the farms [are] all gone and we haven't had any benefit from that."

Resentment towards the role of foreigners in mining in local communities is widespread, with ­frequent attacks by Ghanaians against increasingly heavily armed Chinese miners. The Chinese are also accused of assaulting Ghanaians, whom they employ to operate their machinery.

On the site where Huang and his colleagues work, the ground is littered with spent shotgun cartridges. "We have the guns to defend ourselves from the locals," said Huang.

Many of the guns owned by Chinese miners are said to come from the police, a practice one senior officer said was indicative of the widespread corruption fuelled by the influx of foreigners propped up by cash from illegally mining gold.

There have been several high-profile cases of police corruption in relation to Chinese illegal mining recently. In early April five policemen were arrested for robbing a Chinese miner at gunpoint, after the incident was captured on CCTV.

"It is standard practice for small-scale miners who work illegally with foreigners to pay off the police," one Ghanaian mine owner said, asking not to be named. "We have a budget for the police and for the immigration authorities and every month we pay them to leave us alone."

The government's precious minerals and marketing commission, which buys gold produced in Ghana through licensed agents, said it did not buy illegally mined gold. But the Guardian filmed dozens of Chinese miners entering a commission-licensed agent in Dunkwa, a gold-producing centre in Ghana's central region, leaving with plastic bags full of what looked like cash.

The manager, Govinda Gupta, said he was unaware it was illegal for his company to buy gold from the Chinese and that the company buys at least 5kg of gold every week, which it exports to India via Dubai.

"There should be more traceability in gold," said Brentum, who is part of a worldwide initiative to produce gold certified as "Fairtrade" and "Fairmined", and which aims to make 5% of all gold responsibly mined by 2025.

"There is a growing market for ethical gold, and we foresee a time when all gold will have to be responsibly mined, which would ensure protection for the environment and people who work in mines," said Brentum. – © Guardian News & Media 2013