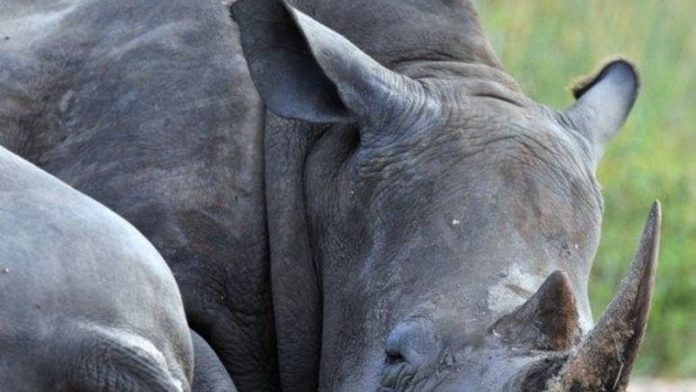 A leading rhino expert told the Associated Press that the last rhino in the southern African nation has been killed. The warden in charge of the Great Limpopo Transfrontier Park – the only place where the horned behemoths lived in Mozambique – also says poachers have wiped out the last of the rhinos. Mozambique's conservation director believes a few may remain.

Elephants also could become extinct in Mozambique soon, the warden of the Great Limpopo Transfrontier Park, Antonio Abacar, told AP. He said game rangers have been aiding poachers, and 30 of the park's 100 rangers will appear in court soon.

"We caught some of them red-handed while directing poachers to a rhino area," Abacar said.

A game ranger arrested for helping poachers in Mozambique's northern Niassa Game Reserve said on Mozambican Television TVM last week that he was paid 2 500 meticais (about $80) to direct poachers to areas with elephants and rhinos. Game rangers are paid between 2 000 and 3 000 meticais ($64 to $96) a month.

While guilty rangers will lose their jobs, the courts serve as little deterrent to the poachers: killing wildlife and trading in illegal rhino horn and elephant tusks are only misdemeanors in Mozambique.

"Their legal system is far from adequate and an individual found guilty is given a slap on the wrist and then they say 'OK. Give me my horn back,'" said Michael H Knight, chairperson of the African Rhino Specialist Group of the International Union for the Conservation of Nature's Species Survival Commission.

Massive slaughter
A meeting of the group in February reported there might, possibly, be one white rhino left in Mozambique and no black rhinos at all, Knight said.

According to Abacar: "We have already announced the extinction of the rhino population in Limpopo National Park."

But Bartolomeu Soto, director of Mozambique's transfrontier conservation unit, told the AP "We believe we still have rhinos, though we don't know how many."

Mozambican news reports have said the last 15 rhinos in the park were slaughtered in the past month, but park officials said those reports were wrong. Soto said the misunderstanding had arisen over Abacar's statement to journalists that he had not seen a rhino in the three months since he was put in charge of the large park.

The only official figure available for rhino deaths is that 17 rhino carcasses were found in the park in 2010, Soto said. He said officials believe poaching must be taking place because rhino horn and elephant tusks carried by Asian smugglers are regularly seized at Mozambique's ports, although at least some of the contraband could be from animals killed by Mozambican poachers in neighboring South Africa. This week a person was arrested at the airport of the capital, Maputo, in possession of nine rhino horns, Soto said.

The price of rhino horn has overtaken the price of gold as demand has burgeoned in Asian countries, mainly China and Vietnam, where consumers wrongly believe that the horn – made of the same substance as fingernails – has powerful healing properties. Chinese traditional medicine prescribes it for everything from typhoid, infant convulsions and fever to an antidote for poison and to relieve arthritis and cure possessions by the devil. Syndicates from Vietnam, China, South Korea and Thailand have been identified as being involved in the trafficking.

First extinction
Knight said rhinos first became extinct in Mozambique around the turn of the last century, in the age of the big white hunters, when the animals also nearly disappeared in South Africa, which is now home to 90 percent of Africa's estimated 20 000 white rhinos and 4 880 black rhinos.

In 2002, leaders of Mozambique, South Africa and Zimbabwe agreed to establish a transfrontier park straddling their borders and covering some 35 000 square kilometers of the best established wildlife areas in southern Africa with South Africa's famed Kruger National Park and Zimbabwe's Gonarezhou National Park. It is funded by several international wildlife organizations and the European Union.

Soto said some 5 000 animals of various species were translocated from South Africa to Mozambique, including the first 12 rhinos to roam in Mozambique in a century.

In 2006, South Africa removed some 50km of fence between Kruger and Limpopo National Park. Soto said the entire 200km of fence was not removed because Mozambique still is working to resettle some 6 000 people living in the park.

A second phase was to include two other Mozambican parks, allowing the transfrontier park to extend over 100 000 square kilometers that would make it "the world's largest animal kingdom," according to the South African Peace Parks Foundation.

Those plans now are in danger, as is the Great Limpopo Transfrontier Park. Knight said South African officials are even discussing rebuilding their fence with Mozambique.

Increasing deaths
​South African officials say their country has lost 273 rhinos to poachers so far this year. They say most have been killed by Mozambicans who cross into Kruger Park. Poachers killed 668 rhinos in South Africa last year.

The slaughter continues with the number of deaths increasing even though South Africa has declared war on rhino poachers and for two years has deployed soldiers and police in Kruger, a vast park which is the size of Israel.

Soto said Mozambique's government has been working since 2009 on a comprehensive reform of environmental laws involving consultations with all stakeholders. He said he expects the draft legislation to be presented to parliament soon. It includes criminalizing the shooting of wildlife and would impose mandatory prison sentences on offenders.

But it will come too late to save the last of the rhinos in Mozambique. – Sapa-AP

It’s been a year since Frelimo and Renamo signed the Maputo Accord. This time, the peace might just hold
Read more
Africa

Mozambique needs an intervention – but SADC must not rush in blindly