Why MDC can’t win the generals 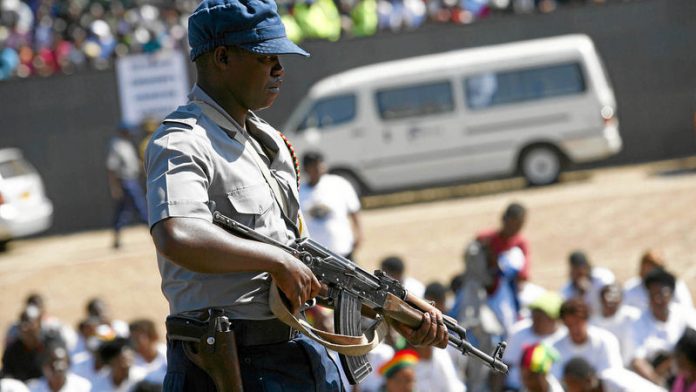 In these days of suspicion and mistrust among President Robert Mugabe's allies any suggestion that one of them is talking to the enemy was always going to be met with a heavy response.

Reports that the Movement for Democratic Change (MDC) was again trying to revive previously failed efforts to reach out to the military drew strong rebuttals from the military and resulted in the arrest of journalists.

The denials – delivered in somewhat flamboyant vocabulary – were aimed less at Morgan Tsvangirai than at Mugabe. With Zanu-PF again entangled in all sorts of factional intrigue, the army generals had to be sure Mugabe himself was left with no doubt that he could still rely on his trusted top brass.

The arrest of journalists who published the claims of engagement between the MDC and the military was possibly just intended to drive the point home.

"We have no time to meet sellouts," Zimbabwe National Army commander Constantine Chiwenga told state media at the weekend. "Clearly Tsvangirai is a psychiatric patient who needs a competent psychiatrist."

To meet Tsvangirai would be to "spit on the struggle", Chiwenga said. Earlier, Police Commissioner Augustine Chihuri had said he would not meet "confused malcontents". He would arrest anyone who repeated those claims, he warned.

Given how badly the MDC has failed in its efforts to infiltrate the military, Mutsekwa's claims seemed doubtful to many. Such claims are also not new. But the military's top badges felt, this time, they had to offer a response, and it had to be seen to be a tough response.

What is less certain is where the affair leaves the MDC, which has tried for 10 years to reach out to the army. Tsvangirai is desperate to get some assurance that he would be allowed to rule, in the event that he ever won an election.

Previous attempts by the MDC to reach out to the military have failed, hurting the MDC's own credibility and pushing the army further away. The military has been increasing its involvement in politics and the economy and is also becoming increasingly sensitive to how it is viewed by its opponents, but more importantly, by Mugabe. Yet Tsvangirai's choice of trusted defence advisors crippled whatever strategy he might have had.

The military is stuffed with war veterans and is suspicious of the MDC, which was openly backed by the West and by white farmers when it was launched. This meant that Tsvangirai's choice of any point men on military matters had to be clever. It wasn't.

Mutsekwa, who has been his senior military advisor over the past decade, fought on the side of the Rhodesian army during the war, a fact Zanu-PF repeatedly brings up to soil his name.

It's tough
Another of Tsvangirai's previous defence advisors was Martin Rupiya, a respected security analyst who also served in the Rhodesian army. Rupiya stepped down as advisor in 2009, reportedly after Defence Minister Sydney Sekeramayi said the generals would refuse to sit in the Security Council – a grouping of government ­ministers and security forces – if Rupiya was present because he had fought against them during the war.

Even Mutsekwa, in his claims last week that he had met the military, acknowledged it would be tough to try and pry the generals from their Zanu-PF roots. "They fought the liberation struggle under a certain political leadership and system, so they believe in that system."

Previous attempts by the MDC to establish military alliances that come to mind are the 2003 tape transcript produced in court during Tsvangirai's treason trial that showed him claiming to have sent Mutsekwa to meet the military "to smooth the relationship and lay down our views that the army has to remain professional".

Air Marshal Perence Shiri, who testified during that trial, denied meeting Mutsekwa, calling it "a blatant lie". However, he told the court he had been approached in 2001 by Job Sikhala and Tafadzwa Musekiwa, who were then MDC MPs.

The meetings were held ahead of the 2002 presidential elections. "[Tsvangirai] wanted me to be the commander of the armed forces and to play a pacifying role to war veterans and the armed forces who would have been disgruntled by his election," Shiri told defence lawyer Eric Matinenga, who is now constitutional affairs minister.

In January 2003 Tsvangirai claimed he had held talks with retired Colonel Lionel Dyke, who, he said, was acting on behalf of the late defence forces chief Vitalis Zvinavashe and Defence Minister Emmerson Mnangagwa. The claims were also denied. Since then, the MDC's insistence on "security reforms" has only driven the two sides further apart.

Prepared to die for Mugabe
Douglas Nyikayaramba, a top military officer, recently declared that he was prepared to die to keep Mugabe in power.

Tsvangirai responded by charging that civilian authority had been usurped by "a small, parasitic clique at the helm of the military". In 2011 Mugabe said the army could never be separated from Zanu-PF. "They are a force that has a history, a political history. We worked with them when they were still guerrillas."

While the army's allegiance to Zanu-PF may indeed have been born in the struggle, it has taken a lot of nest-padding to keep those bonds going. Army chiefs have been treated to the choicest farms, retired and even serving officers get to head some of the country's biggest state enterprises, and the army has ­diamond concessions.

Journalists prepare for a new onslaught

The arrest of the editor and chief reporter of the Zimbabwe Independent on Tuesday, four days after Zimbabwe marked World Press Freedom Day, has ignited fears of the onset of a wider crackdown on journalists as the country heads for a high-stakes election.

The editor, Dumisani Muleya, and Owen Gagare were arrested for a newspaper report published last month that claimed army generals had held secret talks with Prime Minister Morgan Tsvangirai in a bid to curry favour with him should he defeat President Robert Mugabe in elections.

In the reports, the defence and security secretary, Giles Mutsekwa, a retired major and a member of the Movement for Democratic Change party, confirmed he had held talks with the Zimbabwe Defence Forces commander, General Constantine Chiwenga, the Zimbabwe National Army chief of staff (general staff), Major General Martin Chedondo, and the chief of staff and quartermaster, Major General Douglas Nyikayaramba. The story sparked a verbal attack by the military on the MDC and Gagare.

Gagare is a former intern with the Mail & Guardian's investigative unit, amaBhungane. He has previously reported for this paper on the shady dealings in the Marange diamond fields. Persistently, since the rise of the MDC and as a challenge to Mugabe's rule, the military has publicly said it would neither recognise an election victory by Tsvangirai nor salute an individual who had no liberation war credentials.

The two journalists are being charged under section 31A(3) of the Criminal Codification Act and are accused of "publishing false statements prejudicial to the state" and "undermining public confidence in the state".

The "silly season"
According to the law, if convicted, the pair will be found guilty of publishing or communicating a false statement prejudicial to the state and liable to a fine of up to or exceeding level 14 (the highest level) or imprisonment for a period not exceeding 20 years, or both.

Trevor Ncube, executive chair­person of the Zimbabwe Independent and owner of the M&G, said the arrests of the journalists were a sign that "the silly season is upon us".

Muleya, after his release from the Harare Central police station, said the arrest was a clear abuse of the state machinery and an act of systematic harassment of journalists who were merely doing their job. "Our arrest confirms the media environment remains hostile and that journalists are still working under a repressive environment," Muleya said.

He said that although there had been media reforms under the unity government in the past four years, conditions for reporters remained largely restrictive.

"In Zimbabwe, repression of the media tends to increase around elections and the 2013 election won't be an exception. This [arrest] is meant to intimidate the media. We should brace ourselves for more arrests going to that poll," he said.

The Zimbabwe Union of Journalists condemned the arrests and warned those in the media that arrests were likely to increase in the run-up to the elections.

What is the proper way for young Zimbabweans to remember Robert Mugabe's legacy?
Read more
Advertising
Continue to the category
Politics