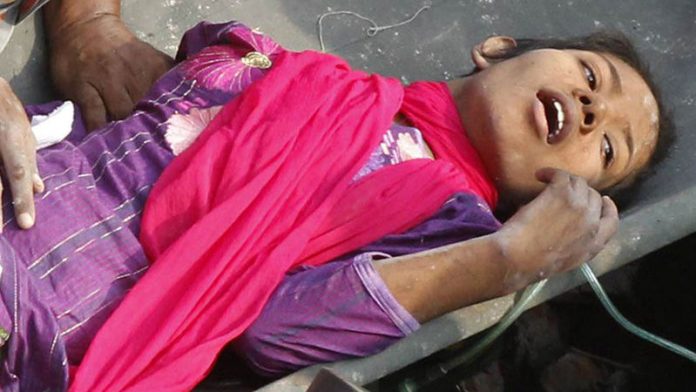 "She has been located in a gap between a beam and a column. Her name is Reshmi. She may have reserves of water or have drunk some of the water that we've pumped into the building," the country's fire service chief Ahmed Ali told Agence France-Presse on Friday.

One of the rescuers said that the woman had cried out for help as recovery teams sifted through the wreckage more than 16 days after the nine-storey Rana Plaza complex collapsed on the outskirts of the capital Dhaka.

"As we were clearing rubble, we called out if anyone was alive," the unnamed rescuer told the private Somoy TV channel.

Brigadier General Siddiqul Alam, the army officer overseeing the recovery operation on the outskirts of the capital Dhaka, said the toll now stands at 1 041, making it one of the world's deadliest industrial disasters.

Alam said many of the bodies were little more than skeletons, 17 days on from the implosion of the nine-storey Rana Plaza compound at Savar, and the stench from under the rubble suggested that many more were still to be located.

"Each time we moved a slab of concrete, we found a stack of bodies."

Levels of compensation are inadequate
More than 3 000 workers were on shift on the morning of April 24 when the building suddenly caved in.

Most were earning around $40-a-month job to make clothing for Western brands such as Italy's Benetton, Britain's Primark and the Spanish label Mango.

Survivors who are now without work say the levels of compensation are inadequate and will not even cover the medical costs for victims who have suffered serious injuries, including amputations.

Efforts to identify victims are being hampered by the decomposition of bodies, although some were found with mobile phones in their pockets or identity cards around their necks.

Scores of relatives still awaiting news of their loved ones again gathered at the site on Friday, desperate to at least accord them a proper burial in their home village rather than have them buried in an anonymous communal grave.

Most of the victims were female garment workers and they included many teenagers, despite it being illegal for factories to hire anyone under 18.

Among those unaccounted for was 15-year-old Brishti Akter, whose mother Rozina remained hopeful that the teenager's body would be recovered after spending much of the last fortnight at the disaster scene.

Police have arrested 12 people
​"She had a key tied to her waist and she was wearing olive-coloured shalwar kameez [baggy trousers] and a henna-coloured tunic," Rozina Akter told AFP at Savar on Friday, while clutching a photo of Brishti.

"I'm not leaving here without her. She was my life."

Recovery workers, drawn from the ranks of the army and fire service, are having to wear masks and use air freshener as they pick through the ruins.

The preliminary findings of a government probe have blamed vibrations from four giant generators on the upper floors for triggering the collapse.

The building's architect told AFP he designed the structure to house a shopping mall and offices, not factories.

Police have arrested 12 people including the plaza's owner and four factory bosses for forcing people to work on the day of the disaster, even though cracks appeared in the structure the day before.

The collapse was the latest in a string of disasters to blight the textile industry, with a factory fire last November killing 111 workers.

Western retailers threatening to pull out
A fire at a textile factory in Dhaka on Thursday killed eight people, including its owner.

Bangladesh is the world's second-largest apparel maker and the $20-billion industry accounted for up to 80% of annual exports last year.

But it has a shocking safety record and Western retailers have been threatening to pull out unless authorities come up with a credible programme to raise standards in the 4 500 factories. Disney has already done so.

Benetton chief executive Biagio Chiarolanza however said his company did not intend to pull out of Bangladesh, insisting the welfare of workers in poor countries is best served by providing jobs.

"It's not the solution to go outside from Bangladesh or to think in the future we can leave Bangladesh," Chiarolanza told the Huffington Post.

"I spent some period of my life in this part of the world, and I believe – I really believe – Benetton and other international brands can help these countries improve their condition." – AFP

Cricket World Cup: Do the Proteas tick all the boxes?