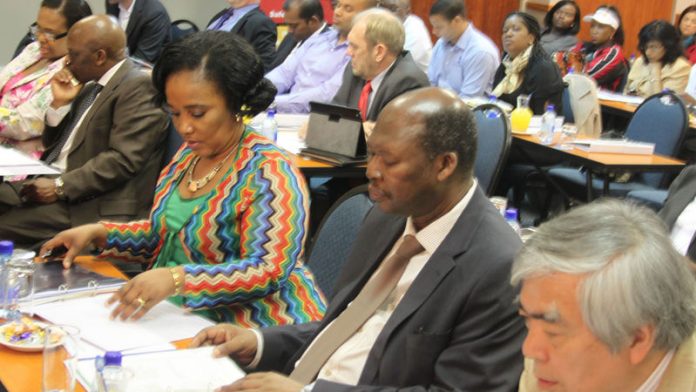 Many deaths on South African roads are caused by tele-communication devices distractions. This was revealed in a workshop jointly conducted by communication and transport departments in Empangeni in northern KwaZulu-Natal last week. The workshop was part of the World Telecommunication and Information Society Day celebration.

The event was attended by telecommunication and transport stakeholders and focused on driver distraction caused by cellphones and other communications devices inside the car. This year’s theme was “ICT and improving road safety”.

In his welcoming address, Mbatha thanked the department of communications for choosing to celebrate the World Telecommunications and Information Society Day in his municipality.

He said KwaZulu-Natal had a high number of road deaths during festive seasons, so the workshop was needed to help change driver behaviour, especially around the use of cellphones in cars.

He also took the opportunity to communicate to the department and cellullar companies that there were still areas where people could not communicate because of poor network coverage. Attendees heard that a global study group, under the chairmanship of Yushi Naito of the International Telecommunications Union, revealed that a driver dialling on a cellphone was 2.8 times more likely to be involved in an accident than a non-distracted driver.

The workshop had two commissions that were tasked to come up with solutions to road accidents. Their themes were in-vehicle information and communications technology solutions for safe driving, and ICT for efficient traffic management and intelligent transport systems.

Naito, whose organisation is based in Switzerland, said that something had to be done to reduce road fatalities caused by telecommunication distraction. Chikunga raised concern about the emergence of technology as a contributing factor to road fatalities, especially the use of cellphones and laptop computers while driving.

“The theme of this ICT Day as adapted by the ITCU is ‘ICTs and Improving Road Safety’. It is in accordance with the Resolution 68 in 2010 and is in line with the United Nations General Assembly Resolution (A/RES/ 64/255) on road safety,” the deputy minister said.

“The fact is that we are losing our loved ones at an undesirable rate. “Our traffic law enforcement, education, campaigns and other forms of interventions must be heard. At an estimated 14 000 deaths every year, surely we have to make strides to come up with ways of using ICTs in various areas of our lives.

“We can confidently support and recognise innovation effort in the ICTs that are used to fight the road carnage.” She also said that the use of ICTs in road safety had some notable benchmarks, and that over 15 years ago the EU set a target to reduce the number of road fatalities by half in 2010.

She said it had constantly proposed the systematic use of ICT driver support systems to design safer and more intelligent vehicles. The Gauteng Freeway Improvement Project, efficient traffic flow and managing traffic more efficiently had great potential in reducing emissions and fuel consumption. “We need to understand and improve the efficiency of better synchronisation of traffic lights as using non high-tech devices to avail traffic updates to motorists,” she said.

“Already through the use of speed cameras, the eNatis system-technology is playing an essential part. The departments of transport and communication, and the technology industry are working toward many more methods that can be put into use to enable the work of the traffic police and create an information management system to work effectively to make a positive impact on saving lives. “We cannot fail our people. We cannot rest until we have ultimately collapsed and obliterated the scourge of road carnage,” she said.

Apart from road fatalities caused by cellphone distractions, the deputy minister also complained about the low usage of seatbelts by backseat passengers. She said that research revealed that less than 2% of backseat passengers buckled up.

“Before, we were charging the driver for his passengers not using seat belts because not all the cars were fitted with backseat seatbelts. “All cars are now fitted with seatbelt, so it is no longer the drivers’ responsibility to ensure that passengers wear them.

“Taxis and buses now have seatbelts and we realised that it was going to be unfair to make drivers responsible for so many passengers. If we can improve the usage of seatbelt up to 80% we can reduce road fatalities by 30%,” she said. Hlabisa suggested that the maximum speed limit be reduced from 120 to 110km/h. He said this is happening in other countries.

Another problem cited by Hlabisa was the increasing number of youth texting while driving. “In this year’s Youth Day on June 16 the department’s message will be focusing on teen texting while driving,” Hlabisa said. He also said one of the department’s other strategies to reduce road fatalities was to identify more than 2 000 schools that are now teaching learner driving as a syllabus.

The commissions recommended that to reduce road fatalities by up to 50% in 2020, all cars had to be fitted with a voice-enabled texting system (to curb driver distraction) and an anti-collision radar (to sense any object that may be hit by a car from a 50m to 80m distance).

It was also suggested that cars be fitted with devices to monitor drivers’ behaviour on the road. This would minimise the use of traffic police and speed cameras. Other possibilities noted in the discussion were devices in vehicles to alert emergency services to accidents to save lives by reducing delays in getting help. Chikunga said these recommendations will be sent to various department clusters to formulate relevant legislation.