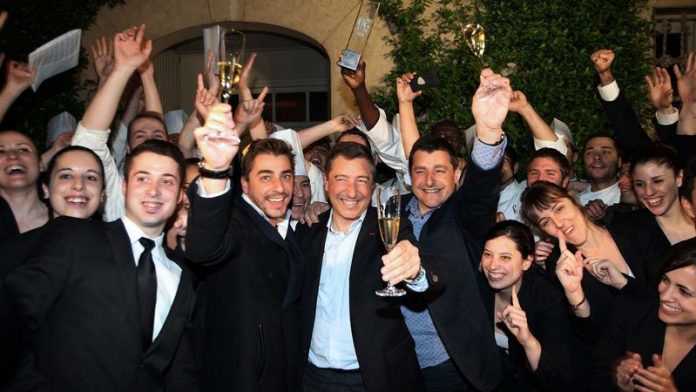 When I heard the Roca brothers’ restaurant was on top of the World’s 50 Best Restaurant list announced in April, my heart skipped a beat. I should declare upfront that meeting Joan, Josep and Jordi Roca had left me feeling like the young soldier in Fernando Trueba’s film Belle Epoque who fancied four Spanish sisters; I fell for all three Catalan brothers.

I visited El Celler de Can Roca for lunch and an interview with the Roca brothers in 2005, en route to El Bulli. Before closing in 2011, El Bulli was rated best restaurant in the world (on the same list) for four years running, and it’s where Ferran Adria revolutionised modern cookery with his decontructionist approach, popularly known as molecular gastronomy.

Back then El Celler, which today has three Michelin stars, had two stars. It wasn’t yet listed among the World’s 50 Best Restaurants but a quick canvas of chefs in Barcelona revealed that they had a hard time deciding who they admired more: Ferran Adria or Joan Roca. Joan was modest. “It’s incredible,” he said, speaking about opening El Celler in 1986, “I never thought my child would go up and up.”

All three brothers seemed to think it curious that a journalist should want to talk about what they were doing. Still, they handled my ­questions with grace, taking turns to explain how they work while around us the lunch service reached full tilt.

As each sister in Belle Epoque represents a different womanly charm, at El Celler de Can Roca in Girona, each brother represents a point on the gastronomic triangle of chef, sommelier and chef patissier, or as they put it: the salty, the liquid, the sweet. Joan, the eldest, conducts the orchestra from the kitchen; Josep, the middle brother, applies science to his wine pairings; Jordi, the youngest, delivers the sweet finale.

I like to think that, aside from my food-nerd crush, I was drawn to what they stand for: humility, focus on their craft and respect for their heritage. When I was there, granny Angeleta’s portrait presided over the reception and at 94, Angeleta, whom the brothers referred to as their muse, would still pay visits to El Celler to see what went down in her grandsons’ kitchen, even though she thought it “crazy”.

At the time, El Celler was next door to their parent’s bar-restaurant, Can Roca, where the boys grew up watching their mother, Montserrat Fontané, cook homely, regional dishes for local bus drivers. El Celler has since moved 100m away.

Homeland cooking
Catalonia — which continues to fight fiercely for independence — is not Spain, Joan told me, much as his mother’s Catalan rice is not paella. In El Celler’s sophisticated dining room, this rice was served folded with liver parfait and pine nuts, alongside smoked pigeon with Oloroso sherry sauce. “Once people eat here, they want to taste the great dishes of our mother on the other side,” said Joan.

Joan is creating New Catalan Cuisine by refining traditional Catalan dishes using molecular gastronomy techniques, many of which he’s helped to develop. For example, they came up with a distilling apparatus that can extract the mineral essence of a handful of soil, which was used in their 2005 flagship dish “Oyster with earth distillate”.

Milestones like this remain on El Celler’s menu with the year in which it was perfected noted — much like vintages in wine.

But when I tell anyone about El Celler, I always start with Jordi’s desserts. The “Journey to Havana” mimics a Cuban cigar smouldering in an ashtray — and the sensory experience of smoking it — through cigar-smoke ice cream encased in chocolate with crushed violets as falling ash. The “Adaptation of Calvin Klein’s Eternity” translates fragrance notes, like bergamot, orange blossom, rose and vanilla, into jellies, custards and ice creams.

It is Jordi’s desire that more than an elite few taste what he and his brothers make — El Celler’s full Festival menu costs about R2 000 and the restaurant is fully booked well into 2014 — so in April Jordi opened Rocambolesc Gelateria, an ice-cream parlour with candy-striped Willy Wonkaesque décor selling artisanal ices for a few euros.

You can also buy buns embossed with a capital R and filled with hot, frozen ice cream (the result of two years of experimenting) and El Celler’s signature milk dessert: candy floss, guavas, dulce du leche and ice cream made with sheep’s milk from the Catalan Pyrenees, all made in the kitchen of El Celler de Can Roca before being transported by bicycle to the gelateria.

And the gelateria only exists because official regulations ­prevented Jordi from distributing ice-cream cones on the sidewalk from El Celler’s Andreu Carulla-designed petit-four trolley (now the centrepiece in his shop). Wouldn’t you fall in love with a young man who wanted to wheel a dessert ­trolley through the streets of his hometown to share his creations with fellow citizens?

El Celler was included on the World’s 50 Best list the year after I was there and, besides a dramatic jump to fifth place in 2009 (the same year it was awarded a third Michelin star), the climb has been slow and steady. The win is a triumph for the Catalan people. Food is identity and through this they receive some of the recognition they crave.