Who will play Hillary Clinton in new biopic? 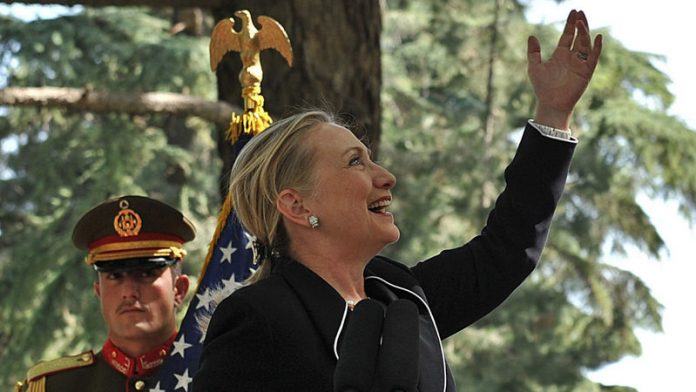 The US presidential election may be three years away, but speculation is already rife about the runners and riders in what is sure to be an epic battle for the White House.

Some of the fiercest debate has emerged not from the corridors of power in Washington DC but from Hollywood in the shape of a planned biopic, Rodham.

The movie will portray a thinly fictionalised version of a young Hillary Rodham starting out on a life path that should, according to observers, see her, as Hillary Clinton, being the overwhelming favourite in the 2016 contest. It will detail events in her life in the 1970s as she meets Bill Clinton and works in Washington DC, including her involvement in the dramatic events surrounding the impeachment of then president Richard Nixon.

There is much speculation as to how the movie might affect Clinton's potential bid to be the first female president. Much of the debate has centred on how the movie will portray her. So far names in the spotlight include Reese Witherspoon, Jessica Chastain, Amanda Seyfried and Scarlett Johansson.

The opportunity is a huge one. "Thank God this is a role that Meryl Streep can't play," said Noah Levy, a commentator on US cable TV's VH1 channel. "This could be a breakthrough moment for an actress. But it is not going to be easy. Everyone knows Hillary Clinton, her mannerisms and her look. This role is going to get a lot of scrutiny."

Rodham offers an unusual platform for an actress in that it looks at an historically important figure's early life while they are not only still alive but may not yet have reached their career peak. That is sure to put the movie front and centre of the 2016 contest. But it also creates risks for the actor who takes on the role. "The danger is that they do a bad job. It could end your career. You are playing someone so revered," said Levy.

Controversial script
That perhaps explains why the debate over who might play Bill Clinton has been less charged. Not only is his simply a love interest role, but the ex-president long ago left office for the life of a globe-trotting philanthropist. Few names have been mentioned in the Hollywood press linking actors to the role but betting shop Paddy Power has put Jake Gyllenhaal, Tobey Maguire, James Franco and Jeremy Renner among its top picks.

But it is not just the casting decisions that are attracting interest in Rodham, to be directed by James Ponsoldt, who recently helmed the well-regarded independent move Smashed. Leaked script details have proved controversial. Melissa Silverstein, who wrote a book on female directors, In Her Voice, has raised doubts about the portrayal of the young Clinton, saying Rodham appears to deal harshly with feminism.

She said: "In one scene Clinton is seen complaining to friends about how uncomfortable her bra is and Bill Clinton is shown complaining about the 'feminist agenda' of her friends as he tries to persuade her to come to Arkansas and marry him. It bothered me with its depiction of how feminism looked at the time."

There is also sex – a touchy subject given its powerful subjects' continuing marriage and vastly high public profiles. "They are young people. They have sex. It is pretty normal. It is not 50 Shades of Grey," Silverstein said.

This is no easy landscape for the film-makers to navigate. They must piggy-back on their subject's fame and potential presidential run, without triggering any form of backlash, especially among the heavily female audience likely to flock to such a film. Silverstein is not sure that formula has been achieved and worries that Rodham could end up being heavy-handed about the women's issues it deals with. "With Hillary Clinton you have to be really smart about how you handle these things. Beating up on your female audience is not the smartest thing to do," she said. – © Guardian News and Media 2013

State capture commission former secretary says allegations against him are...

In its court document, the SIU sets out its case against the alleged fraudulent and corrupt relationship between Digital Vibes, Mkhize and the health department — and asks for a tender worth R150-million to be set aside and money paid back
Advertising