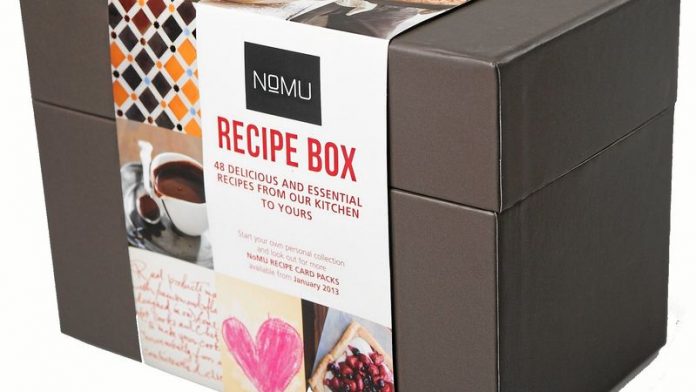 For many of us, our cook books are too precious to be practical. Pages get splattered and bubble, covers develop a film of grease, spines crack. One solution is to copy the recipes into your own book, the Moleskine Recipe Journal blank being my favourite because it has numbered pages and an index facility. But even those notebooks become too precious to risk in the mess of home economics.

The Nomu food company has come to the rescue with a neat box of cards. Originally approached by Penguin to do a cookery book, the typically maverick (in the best sense of the word) Nomu decided instead to produce a box.

Launched in January this year, the sleek grey boxes were issued with eight recipes in each of six categories — starters, mains, sides, desserts, treats and basics, a handy conversion chart, and plenty of room for more recipes. There have subsequently been two series packs of eight recipes in each category. The first in February included a mystery card to collect and swap in order to enter a competition for a Smeg cooker, and the second series in April offered as a prize a Kitchen Aid mixer and accessories worth R16 000 (the competition is still open; the closing date is July 20).

The category dividers are colour coded but the individual recipe cards are not — so I keep “misplacing” or, you could say, customising my cards, especially between treats and desserts. Printed on durable, high-quality board (190mm x 130mm), it all works rather well.

It has been a hit with Nomu brand loyalists but booksellers don’t seem to know quite how to handle the Nomu Recipe Box, says Paul Raphaely, Nomu managing director.

Innovative marketing
As one would expect, each recipe includes the use of one or more Nomu products. The original recipes were created by company founder Tracy Foulkes. Subsequently, other chefs and local foodies created recipes for it. One can also subscribe to receive a free emailed monthly recipe card.

Nomu is known for its innovative marketing and bold, pristine packaging. Foulkes is the foodie, Raphaely the brand manager. Many South Africans are unaware that it is a South African company. The rather unusual, foreign-sounding name (one thinks of Japan or Scandinavia) dates back to Foulkes’s vegetarian days: “no moo” as in no cow.  They now export to 38 countries.

Comparisons are odious but one could say that Nomu (founded in 2000) is the Paarman of the 21st century. Both are family businesses that started small: Ina Paarman in her garage, Foulkes in the front room of her Oranjezicht home. But, whereas Paarman emphasised granny’s cooking and traditional values, aimed for the store-bought equivalent of homemade, and seemed to conjure up an Oregon pine Cape kitchen, the stylish Nomu brand feels international, slightly exotic and is more at home in the modern, stainless-steel kitchen with clean white, eccentrically shaped tableware. Nomu is pink salt and rainbow peppercorn grinders; BBQ rather than braai.

Paarman did get conservative South Africans hooked on sundried tomatoes and even to coat their pasta with nothing more than pesto (almost revolutionary at the time). Nomu now has expanded South African tastes still further, introducing Egyptian dukkha, North African rubs, exotic spices and flavours such as ajowan and sumac.

Though not for the novice, the Nomu box recipes range from very simple (roast leg of lamb; custard tarts with store-bought puff pastry) to mildly difficult (pork belly with chocolate hoisin sauce; pavlova). There are also staple recipes for home-made pasta, pizza and shortcrust pastry.

Finally, the clincher for me is that, from July, two-sided blank template recipe cards for my own concoctions will be available.

The Nomu Recipe Box is available from the online store at shop.nomu.co.za and from Le Creuset stores, Exclusive Books and YuppieChef