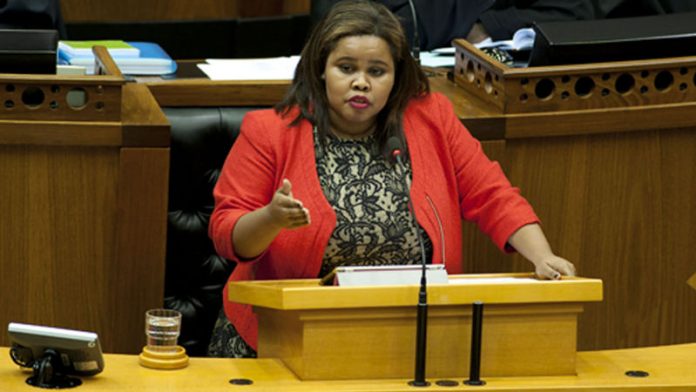 In a statement released by the office of the ANC chief whip on Thursday, the party said that the Democratic Alliance’s parliamentary leader Lindiwe Mazibuko was dressed inappropriately for Parliament.

“We have no desire of playing fashion police in this institution, however, the inappropriate manner in which Mazibuko was dressed [on Wednesday] showed total lack of respect to the debate and the decorum of the House,” it said.

Mazibuko wore a paisley dress that ended above the knee, black stockings and a red jacket.

However, spokesperson for the ANC caucus Moloto Mothapo said Mazibuko’s attire was “too casual” for Parliament and for an important debate such as the presidency budget vote.

In April, the ANC imposed a dress code for its members in Parliament in the interest of protecting the decorum of the House so as not to bring the ANC into disrepute.

Acting deputy chief whip Mmamoloko Kubayi said: “If you look at the rules, you can’t dress without sleeves [or] with boobs out … all those things aren’t allowed from an MP.”

“You can’t come to the house in sneakers and jeans. As a woman, I can’t come wearing shorts,” she said at the time.

Mothapo said Parliament’s multiparty whips forum, where all parties are represented agreed and accepted in principle the ANC’s proposed dress code to address to appropriate dress in Parliament.

Spokesperson for the ANC Women’s League Troy Martens said she didn’t think how a woman is dressed should be an issue, unless she went against a stipulated dress code.

“I don’t know if there are rules like that for Parliament but if there aren’t then she should be able to wear whatever she feels is appropriate for her,” she said.

The ANC’s statement comes after the DA complained about what it called “sexist and chauvinistic” attacks on Mazibuko by ANC MPs Buti Manamela on Wednesday in the presidency budget vote and John Jeffery on Tuesday during the Parliament budget vote.

Jeffery said, “while the Honourable Mazibuko may be a person of substantial weight, her stature is questionable”, while Manamela criticised her dress sense and said if she were to get arrested by the fashion police, her party would blame President Jacob Zuma.

Ashamed
On Thursday, the DA’s deputy chief whip Sandy Kalyan said she would be writing to ANC chief whip Mathole Motshekga to ask that the MPs be disciplined.

“As a woman, I am personally ashamed of their conduct. They are seemingly unable to come to terms with the fact that the leader of the opposition is a woman. After all, they never level such disgusting comments at their male opponents,” said Kalyan.

Hours later the office of the ANC chief whip released a response.

The party justified Jeffrey’s comment, saying: “We understand from Jeffery’s’ explanation that although his reference to Mazibuko during the debate on the Parliament budget vote was a pun, it had more to do with her influence and power associated with the position she holds than her physical weight.”

The same pun could have been aimed at a male in similar position, it said.

Jeffery has denied that his statement was sexist and chauvinistic. The party said he had volunteered to withdraw the statement, given its “ambiguity”.

Mazibuko’s spokesperson Siviwe Gwarube said the DA accepts Jeffery’s apology. “Anything else is nothing more than a distraction from the president’s weak speech in the House”.

Misogyny
In an opinion piece published on the Daily Maverick earlier on Thursday, Gwarube pointed out that male members of Parliament did not insult each other’s appearance.

“Rigorous debate is welcome in Parliament and, more broadly speaking, in politics. But attacks on a person’s integrity and physical appearance are not just unparliamentary, they are prejudiced in the extreme,” she wrote.

“They’ve just proved the point. They’ve gone from giving her a half apology to then attacking her clothes. They think they’re deflecting but they’re actually just driving the point home,” she said.

Solomon pointed out that if the appropriateness of Mazibuko’s attire for Parliament were really in question, MPs should have raised the matter privately with her rather than publically shaming her.

“If we accept that how she was dressed was inappropriate, just go tell her. Walk up to her and say, ‘Lindiwe, next time wear a pantsuit’,” she said.

Jeering
Solomon said she was disturbed by the way female MPs from within the ANC were heard to be jeering when Mazibuko was insulted in Parliament.

“Women in the ANC should be calling them to task because this has happened to ANC women as well and they shouldn’t tolerate this,” she said.

Parliament spokesperson, Estelle Randall said Parliament does not have a written dress code, but the convention, which has been accepted is that MPs should dress in a manner that is in keeping with the decorum of sittings of the Houses and their committees.

The online response to the ANC’s misguided attempts at damage control on Thursday were similarly reproachful.

@LindiMazibuko What WERE you wearing at yy’s debate that showed a “total lack of respect to the decorum of the House”?! A slanket? hotpants?

Magashule’s letter, in which he refused to step aside, said he would be appealing his suspension and added that he was “suspending” Ramaphosa. The letter is said to have angered the president.
Advertising