The detectives said that they found a copy of the agreement when they raided ThyssenKrupp, the German engineering conglomerate which led the consortium that sold four patrol corvettes to South Africa for R6.9-billion.

Yengeni, a struggle stalwart and member of the ANC's national executive committee, this week refused to confirm or deny the allegation. "I've got nothing to say on all you're ­saying," he said.

The latest allegation significantly adds to evidence that the main contracts in the controversial arms deal were tainted by corruption, contradicting a 2001 finding by the multi-agency joint investigation team that subcontracts, at most, were affected.

Bribery is grounds for cancelling the multibillion-rand contracts for trainer and fighter jets, corvettes, submarines and helicopters that the government entered into at the turn of the century.

The government, perhaps fearful of the international repercussions, has resisted such a conclusion. But Judge Willie Seriti's arms procurement commission, which starts public hearings in August, will face a barrage of new evidence to that effect.

The Mail & Guardian has previously revealed how British multinational BAE Systems, which supplied the jets, paid roughly R200-million to Fana Hlongwane, who was the late defence minister Joe Modise's adviser when the arms deal was negotiated.

It has also reported how Thyssen ­allegedly reached a $3-million (about R18-million then) bribe agreement with Chippy Shaik, then head of defence procurement.

Last month the Sunday Times alleged that BAE bankrolled the late Stella Sigcau's daughter when she studied in London. Sigcau, then public enterprises minister, served on the Cabinet subcommittee that made key arms procurement decisions.

The new allegations are unrelated to Yengeni's fraudulent cover-up of a discount he received on a luxury vehicle from another arms bidder, for which he was briefly jailed in 2006.

Raids and a find
German investigators raided ThyssenKrupp's Düsseldorf headquarters in 2006 after tax authorities became suspicious of payments made in the course of the South African arms deal.

AmaBhungane has seen correspondence in which detectives involved in the investigation discuss some of the evidence found.

Among the gems in the haul was an agreement allegedly signed by Yengeni and Christoph Hoenings, an executive of Thyssen Rheinstahl Technik, a ThyssenKrupp predecessor company.

Hoenings was a key protagonist in the Thyssen-led German Frigate Consortium's campaign to sell the corvettes to South Africa. 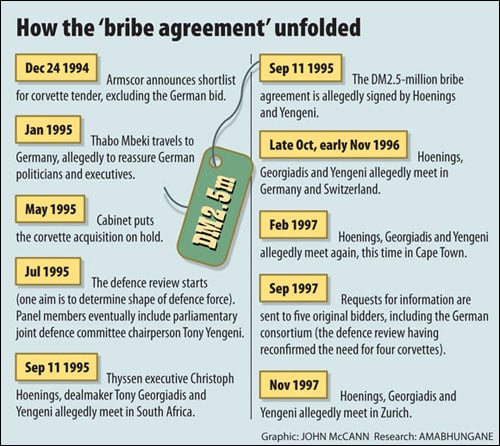 Allegedly concluded when Hoenings visited South Africa in September 1995, the agreement promised Yengeni 2.5-million deutschmark (R6-million then) on conclusion of the campaign to sell the corvettes to South Africa.

Hoenings, who has since left Thyssen, this week refused to comment, saying from Düsseldorf: "I do not speak to the press, please understand this, thank you."

Hoenings's online profile on business networking website Xing.com, however, is unabashed about his use of political connectivity to land contracts.

It says he offers "years of experience as a sales director for exports in shipbuilding/marine", "strong contacts with political parties and well-connected individuals in a number of developing and emerging countries", and "creativity in the development of marketing strategies for obtaining foreign government contracts".

The profile offers the "use of my personal network by interested third parties" – perhaps not unlike Yengeni, whose LinkedIn profile describes him as an "independent government relations professional".

During the South African corvette campaign, Hoenings worked closely with Tony Georgiadis, the London-based shipping magnate who made a seamless transition from supplying apartheid South Africa with embargo-busting crude oil to being best friends with the top echelons of former president Thabo Mbeki's ANC.

Georgiadis appears to have been brought aboard as an agent by the Germans after Christmas Eve 1994, when all seemed lost. That day, Armscor, the state arms procurement agency, had announced the shortlisting of shipyards from Spain and Britain to supply corvettes, eliminating bids from Germany, Denmark and France.

But Thabo Mbeki, then deputy president, travelled to Germany the next month, allegedly to reassure officials.

Hoenings himself was quoted in the Weekend Argus as saying that Mbeki had told him and the German foreign minister that "the race is still open to all contenders".

In May 1995, Cabinet put a hold on the corvette acquisition pending a "defence review", among other things to determine the ideal force design of the post-apartheid defence force.

The corvette tender process was started afresh in late 1997 as part of a comprehensive "strategic defence procurement" of jets, ships, ­submarines and helicopters.

Yengeni was well placed to assist the Germans during this precarious time when the South Africans were reconsidering their needs.

In Parliament, he was ANC chief whip and chair of the joint standing committee on defence. He also later served on the defence review, held under the auspices of the department of defence.

Hoenings' travel claims, they said, showed him meeting Yengeni and Georgiadis in South Africa on the day the agreement was allegedly signed.

After his return to Germany, Hoenings entered a provision for the 2.5-million deutschmark in Thyssen Rheinstahl accounts.

At the time, foreign bribery was not illegal in Germany. It was, in fact, tax-deductible, meaning there was no need to disguise such actions internally.

The provision was removed when Thyssen Rheinstahl and Krupp merged two years later and investigators found no indication in the accounts that the money was paid.

The detectives thought it likely, however, that Yengeni ultimately received the money by indirect means.

Certainly, the contact continued as the defence review unfolded. Hoenings's travel claims specified another four sets of meetings in 1996 and 1997 involving him, Yengeni and Georgiadis.

One set of meetings was in Germany and two were in Switzerland the final one in Zurich in November 1997, two months after the corvette tender, ultimately won by the Germans, was reopened.

Also found, the detectives said, was a claim by Georgiadis for the air fare for Yengeni's first visit to Zurich. Georgiadis allegedly faxed Hoenings the travel agent's invoice, with the note: "The attached for your 'confidential' file (in case he [Yengeni] ever denies having come)."

Georgiadis said this week: "I really, really have no comment whatsoever to make on anything regarding that, okay … I know nothing about it [the bribe agreement]."

German authorities abandoned their investigation of Thyssen in 2008, apparently after reaching a tax settlement. They did not prosecute corruption, in part because it was difficult to prove that any of Thyssen's actions continued after foreign ­bribery was outlawed.

A ThyssenKrupp spokesperson said on Thursday: "The issues related to your request were duly investigated by German authorities. These investigations have been [settled] without any findings."

In 2011 there was an outcry when it was discovered that then-defence minister Lindiwe Sisulu had appointed Yengeni to a committee to conduct a new defence review, despite his conviction for the luxury car cover up.

Sisulu insisted in parliamentary answers to the Democratic Alliance that Yengeni had "paid his dues by serving a prison sentence and was released from custody".

At a media briefing she said: "I chose him to be a member of the committee because of the role he played in the first review.

"He has the necessary background of how we've come to be where we are."

Judge Willie Seriti's arms procurement commission on Thursday confirmed it was aware of the allegedly explosive nature of the evidence found by German authorities and said it was trying to secure it.

Commission spokesperson William Baloyi said: "We are aware of the many statements from a var-iety of sources within South Africa to the effect that the German investigators have uncovered massive evidence implicating various

people and entities in wrongdoing … We have been communicating with the German authorities to secure such evidence and are still awaiting their final response. Obviously the interactions with [them] are of a sensitive nature and we can therefore not comment further."

The commission will start public hearings in August. 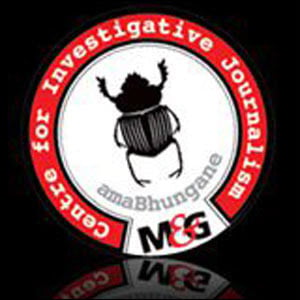