US vs them: A new brand of patriot acts 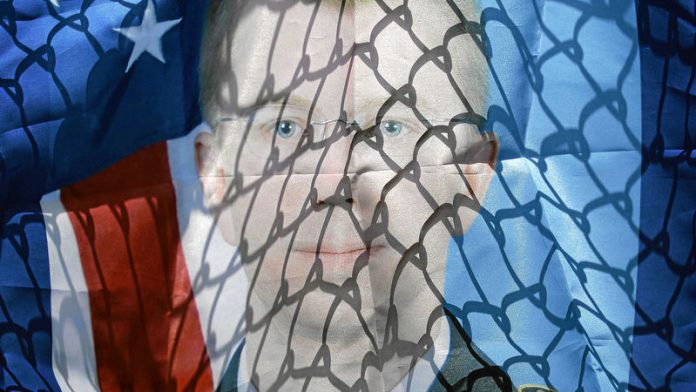 Until, that is, he realised precisely what he had to do. While on patrol in Baghdad, he thought: “What are we doing here? Are we looking for weapons of mass destruction? No. Are we helping the people? No, they hate us. What are we working towards, apart from just staying alive? If this was my neighbourhood and foreign soldiers were doing this, then what would I be doing?”

Within a few months, he says, he “was cocking my weapon at innocent civilians without any sympathy or humanity”.

While home on leave he realised he was not going to be able to lead a normal life if he went back. His mother drove him to Canada, where I met him in 2006 at a picnic for war resisters in Fort Erie, Ontario.

Anderson’s trajectory, from uncritical patriotism to conscious disaffection and finally to conscientious dissent, is a familiar one among a generation of Americans who came of political age after the 9/11 terrorist attacks.

Over time, efforts to balance the myth of American freedom on which they were raised with the ­reality of American power that they have been called on to monitor or operate, causes a profound dislocation in their outlook.

Dramatic fashion
Like a meat eater in an abattoir, they are forced to confront the brutality of the world they are implicated in and recoil at their role in it – occasionally in ­dramatic fashion.

It is from this generation that the most recent prominent whistleblowers have emerged: Edward Snowden, the 29-year-old former National Security Agency contractor, now on the run after passing evidence of mass snooping to the Guardian; Bradley Manning, who, at 22, gave classified diplomatic and military information to WikiLeaks and now faces a court martial; Aaron Swartz, who, by 24, was a veteran hacker when he was arrested for illegally downloading academic articles from Massachusetts Institute of Technology and later killed himself; and Jeremy Hammond (28), who is facing federal criminal charges for allegedly publicising the internal files of a private spying agency.

Just as America’s military record abroad, complete with torture and “collateral damage”, has helped push a section of disaffected Muslim youth across the globe towards ­terrorism, so the violation of civil liberties and privatisation of information has driven a number of disillusioned Americans to law-breaking dissent at home.

In a 2008 book, The Way We’ll Be, US pollster John Zogby categorised this age cohort as First Globals. Tracking everything from views on gay marriage to propensity to travel, he described young Americans aged 18 to 29 as “the most outward-looking and accepting generation in American history”.

Unfazed by social diversity at home they held more open attitudes towards the rest of the world. They were far more likely to travel abroad than others, have friends or family overseas, and to be aware of international politics. “[They] might not be more able than other age cohorts to point to Darfur on a map,” said Zogby, “but they at least know there is a Darfur, and they care what’s ­happening there.”

The perpetual war and accompanying “anti-terror” security structure after 9/11 is all this generation has ever known. And it has had a profound impact on shaping their views on US foreign policy.

Imperialist power
In 2007, 63% (significantly higher than any other age group) disagreed with the statement “I support my country, right or wrong”.

In 2004, 86% thought “an imperialist power that acts on its own regardless of what the rest of the world thinks” was improper or somewhat improper, while just 3% thought the opposite. On the latter question, Zogby wrote: “No other group we studied, not Democrats nor self-described progressives, not readers of the New York Times, had a greater spread between the two extremes.”

It is in this context that the defiance and determination of these young people must be understood.

One could make too much of their age as a unifying factor. Since these leaks demand proficiency with new technology, those involved are bound to be younger.

And older people, with families, careers and pensions, are less likely to do things they know will put them in jail or force them to flee. Moreover, for all the similarities between them, there are significant differences. Snowden contributed money to Republican libertarian Ron Paul’s campaign; Hammond describes himself as an “anarchist-communist”.

Yet, while each acted separately from the other, their unrepentant justifications read as though they were unconsciously working in concert. “I believe people have a right to know what governments and corporations are doing behind closed doors,” wrote Hammond.

Informed decisions
“We need to take information,” wrote Swartz. “Wherever it is stored, make our copies and share them with the world.”

Snowden said: “This is the truth. This is what is happening. You should decide whether we need to be doing this.”

Manning said: “I want people to see the truth because without information you cannot make informed decisions as a public.”

They seek to liberate not land or people, but information. The state seeks to criminalise them as spies. But it wasn’t treachery but patriotism (once blind, now wide-eyed, and, arguably, always misplaced) that brought most of them to this point.

Their aim was neither to enrich themselves nor to aid a foreign power but to make the power in which they invested much of their identity – America – more transparent, knowledgeable, accountable and honourable.

Anderson, Manning and Snowden, for example, all joined the military-security sector after Guantánamo and Abu Ghraib were in the public domain.

They knew what could be done in America’s name. They just never thought they would be put in a position where they would have to choose between doing it, concealing it or exposing it. Raised in the true American ideal that an individual can make a difference, they spoke up.

Forced to choose between allegiance to the flag and uniform, and loyalty to the ideals the flag is ­supposed to represent and the uniform is supposed to defend, they chose the latter.

Their defiance stems from the fact that, in acting as they have, they don’t believe they’ve let down America.

They believe they had to act because America was ­letting itself down. – © Guardian News & Media 2013

The cost of breaking your silence is high

Editorial: Who will guard whistle-blowers?