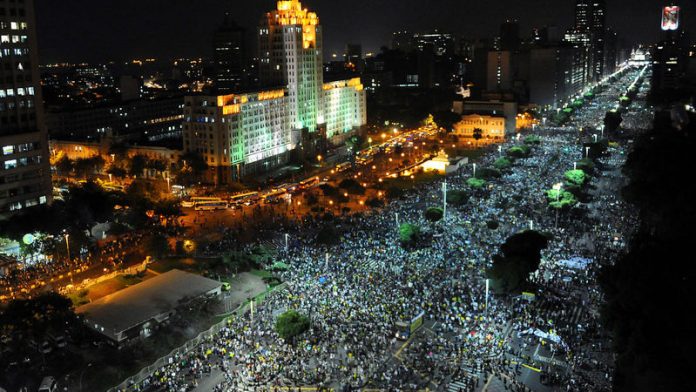 Protesters rallied for better public services and against the high cost of staging the World Cup.

Sources quoted by the daily O Estado de São Paulo said authorities were "frightened" by protesters' attempts to break into the foreign ministry building in Brasilia. The presidential office would not comment on the reports.

The mounting pressure on Rousseff's government in the face of the biggest street protests the South American country has seen in 20 years prompted her to also cancel a trip to Japan planned for next week.

Police fired tear gas in Rio de Janeiro, the scene of the biggest protest where 300 000 people demonstrated near City Hall, while in the capital Brasilia, security forces blocked protesters trying to break into the foreign ministry and throwing burning objects.

Police and experts quoted by Brazilian media said at least one million marched in more than 100 cities across the country of 194-million people, an intensification of a movement sparked two weeks ago by public anger about a hike in public transport fares.

Panic
The protests have spiralled into a wider call for an end to government corruption in the world's seventh largest economy, a call fuelled by resentment over the $15-billion cost of hosting the Confederations Cup and the World Cup.

In Rio, police fired tear gas to disperse a small group of stone-throwing protesters. At least one person was hurt in the clashes, which sparked panic in the crowd.

A protester died after a motorist hit him and two other demonstrators in the south-eastern city of Ribeirao Preto, police said.

In the north-eastern city of Salvador, one of the host cities for the Confederations Cup, police fired tear gas against some of the 20 000 protesters massed 2km from the stadium where Uruguay defeated Nigeria 2-1.

Vehicles used by world football's governing body Fifa were stoned in the Bahia state capital and riot police had to intervene.

'Excessive force'
The Inter-American Commission on Human Rights, meanwhile, called for an investigation into the possible use of "excessive force" on demonstrators and journalists during protests last week.

On Wednesday, protesters had scored a major victory when authorities in Rio and São Paulo, Brazil's two biggest cities, cancelled the controversial transit fare hikes, but that was not enough to placate the demonstrators.

In São Paulo, an estimated 110 000 people flooded the main Paulista Avenue to celebrate the fare rollback and keep the pressure on Rousseff's leftist government to increase social spending.

"Victory, this is just the beginning," one huge banner read.

The protest was largely peaceful except for clashes between a group of ultra-leftists marching behind their red banners and a majority of demonstrators who objected to the presence of political parties.

"This is a social movement, not a political movement. This has nothing to do with ideology," 28-year-old protester Maria Vidal said. "We don't want parties in the demonstration."

Rampant corruption
One of the leftists was hit in the head by a projectile and blamed a member of Rousseff's ruling Workers Party. Police were forced to intervene to end the melee.

Protesters say they want higher funding for education, health and housing. They are also railing against what they view as rampant corruption within the political class.

As the protests heated up in the evening, Rousseff's office announced that she would not travel to Japan on June 26-28 as planned for talks with Prime Minister Shinzo Abe.

Social media networks have been key to the organisation of the mass protests, with demonstrators using the slogan "It's more than just 20 cents" – a reference to the bus fare hikes – to rally people to their cause.

The movement has no political coloration and no clearly identified leadership.

Those opposing the hosting of the World Cup are planning a mammoth march to Rio's iconic Maracana stadium on June 30, the day of the Confederations Cup final. – AFP

Khaya Dlanga: The people shall govern