Not a vulture but a drone: Cameraman detained at Mandela hospital 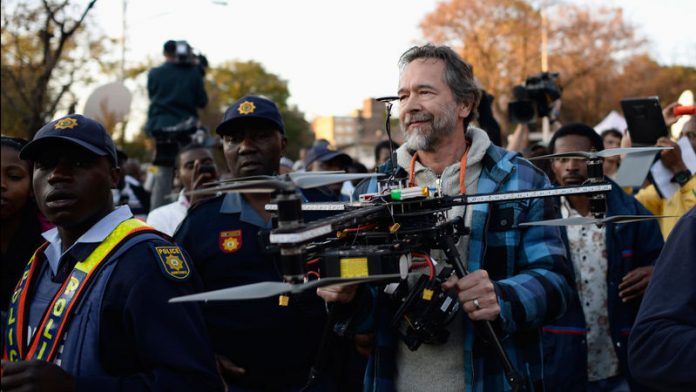 FC Hamman, a South African freelance film-maker, was escorted away by police along with the helicopter camera he was flying with his 21-year-old son Timothy outside the clinic where Mandela (94) has spent three weeks with a lung infection.

After nearly four hours of questioning by police, Hamman was released but the drone camera was confiscated.

"From a security point of view, they are concerned. They are inspecting our equipment to make sure it didn't violate any security regulations," Hamman told Reuters, adding police had not pressed any charges for the moment.

"We didn't realise we were breaking any laws," he said.

Hamman said he had intended to offer to media organisations the aerial shots of intense activity around the hospital, where crowds of jostling journalists have mingled with well-wishers paying tribute to South Africa's former president.

"We were careful not to fly over the hospital," he said.

The intense media scrutiny has angered some of Mandela's family. Daughter Makaziwe on Thursday lambasted foreign media "vultures" for not respecting his privacy as he lay critically ill.

Hamman said he had already used the home-built flying camera in other film projects and had also assisted police with surveillance work in operations against suspected drug-dealers in the crime-plagued Johannesburg suburb of Eldorado Park.

"You can't fly one of those things without a permit," one police officer said at the hospital after Hamman was escorted away. Pretoria police declined to comment further.

The incident came just hours before US President Barack Obama started an official visit to South Africa, which will include stops in Pretoria, Johannesburg and Cape Town.

Asked how he thought Obama's huge security detail might react if he launched the flying "eye in the sky" in the vicinity of the president, Hamman chuckled: "That would be a mistake." – Reuters

Proper sanitation in schools is a human right

Madiba: Dancing to the tune of freedom