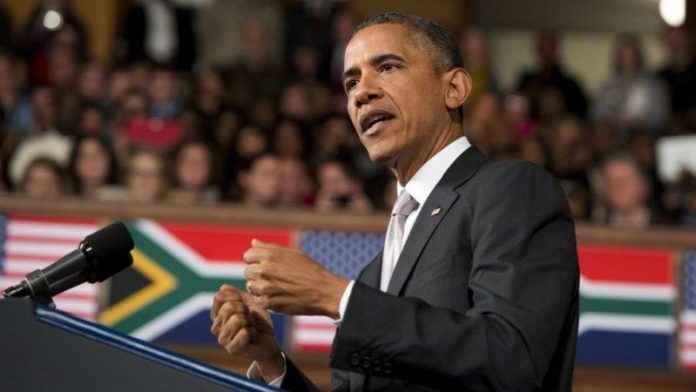 "Today, I am proud to announce a new initiative: Power Africa, that will double access to power in sub-Saharan Africa," US President Barack Obama said.

"We'll start by investing $7-billion in US government resources and partner with the private sector, who have committed more than $9-billion in investment," said Obama, while addressing about 800 people at the University of Cape Town on Sunday evening.

Obama was delivering his remarks at the same venue US politician Robert F Kennedy delivered a speech amidst a political storm in 1966.

National government ministers including Minister in the Presidency Trevor Manuel and social development minister Bathabile Dlamini, premier Helen Zille, Cape Town mayor Patricia de Lille and a number of MPs were among those who attended the event.

Sunday was Obama's last day in South Africa ahead of his visit to Tanzania, the last country on his three-nation visit on the continent.

Enhancing security
The power initiative follows the public-private partnership model and builds on his administration's efforts to enhance food security, fight malaria and attempt to eradicate the spread of HIV for Africa's next generation, Obama said.

Power Africa's $7-billion in government assistance will complement $9-billion in private funds to double access to power in sub-Saharan Africa, where more than two-thirds of the population is without electricity, according to the White House. During the first five-year phase, the project's goal is to add more than 10 000 MW of cleaner, more efficient electric generation capacity and to expand electricity access to at least 20-million new households and commercial entities, according to the White House.

General Electric is among the companies that have contributed to the $9-billion in private sector funding for the programme's first phase. It has committed to help bring 5 000 MW of new energy to Tanzania and Ghana.

Increasing access to power will "plug Africa into the grid of the global economy", Obama said.

He said two-thirds of the population of sub-Saharan Africa lacked access to electricity, including more than 85% of those living in rural areas, and the White House singled out six countries for promoting good governance – Ethiopia, Ghana, Kenya, Liberia, Nigeria and Tanzania.

Obama said America has been invested in Africa for decades and that they were moving beyond simple provision of assistance to new model of partnership.

"We want a partnership that empowers Africans to access greater opportunities," he said.

"This is America's vision: a partnership with Africa that unleashes growth and potential of every citizen, not just a few at the very top … We invest, not in strongmen, but in strong institutions – independent judiciaries, honest police forces, open government … We stand up for civil society: journalists and NGOs; community organisers and activists who give people a voice," said Obama to his audience.

A group of about 20 students protested outside the university in an anti-Obama campaign on Saturday.

Obama, who revealed that he took his first step in politics because of South Africa, also paid tribute to former president Nelson Mandela.

He said while Madiba's health "weighs heavy on our hearts, his spirit shows that one man's courage can change the world".

"Mandela's life, like Kennedy's life … they stand as a challenge to me … but more importantly your generation," said Obama, encouraging the youth to live up to the leaders' values.

This was Obama's second visit to South Africa and to Robben Island, where he visited the prison cell Mandela spent 18 of his 27 years in prison.

He said this visit had been different from the first one in 2006, as his children aged, 16 and 12, could have an appreciation of what Mandela and others went through to free South Africa. That visit was while Obama was US senator. – Additional reporting by Bloomberg