Google Glass proves to be half full 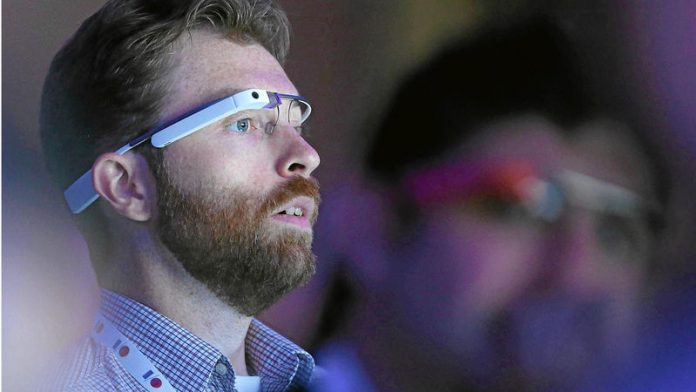 I had expected a lot more from Google Glass. The hype around this wearable device — a pair of glasses that incorporates a little screen in the top of your right eye's field of vision — has been colossal since the release of the first teaser video in April 2012.

Glasses that let you see a map without using your smartphone! Hands-free Googling!

Sergey Brin, the co-founder of Google who had been spotted wearing them in a carefully careless manner on the New York subway, suggested that using a smartphone was "emasculating", and the company sold around 10 000 pairs to "explorers" who now are its guinea pigs.

It's the future — or is it? I'd thought so, until I tried a pair. My reaction? They're great for particular uses, but you're going to struggle to find a use for them all the time. They're not going to replace looking at your smartphone any time soon. Emasculation may be here to stay, Mr Brin.

I'm a fan of wearable computing. I own a Pebble watch, and love it. If someone calls or texts my smartphone, the number and/or the message pops up, with no need to take the phone out.

I've tried ski goggles that displayed my speed and altitude, as well as a map of the ski resort showing runs and lifts.

Virtuality
In the 1990s, when virtual reality was all the rage, I tried some of the early glasses models made by a company called Virtuality, which incorporated little displays to show you a virtual world, just like Google Glass does (except Virtuality's didn't show anything else). So I was expecting a lot from Glass. Perhaps too much.

The device, lent to me by one of the explorers (whom I won't name, as Google has been known to disable devices), is pleasantly light.

You can wear it without lenses, so you just have the frame, and a little lens above your eye. It doesn't feel strange, though of course weirdness is in the eye of the beholder.

And I wear that Pebble, so don't ask me for style tips. The frame is titanium, which you can happily bend to fit your face without breaking it.

You turn Glass on by tilting your head up, or tapping the side of the frame. This activates the tiny screen. It then displays the time and the phrase "OK Glass", which seems to float about 15cm in front of the right side of your face.

Long menu
All require a smartphone connected by wi-fi or Bluetooth to function. Otherwise, Glass is just a fancy, low-res camera.

The menu is too long to fit on the screen, so you have to learn to tilt your head up or down to see the others (though after a time you'd remember them).

The results are read back to you by a microphone just beside your ear using bone conduction, so it's almost inaudible to outsiders.

Of course, you won't have been inaudible. By this stage, you've already spoken to the crowded train carriage. You're also wearing something that makes you look like a Borg on Star Trek.

Normal people don't do this. But if you were worried about what you looked like using Glass, you might not have left the house.

Without warning
Taking pictures and videos is easy. You don't even have to say: "OK Glass, take a picture."

You can just press a button on the top of the sidepiece, or hold it down for video. There's no warning to anyone around you that you're doing so, no red light, no audible click.

That seems like a potential privacy concern, and very different from the situation that came about when cellphones became camera phones.

The best use for Glass, said the explorer who lent it to me, is for maps. You don't have to pull your smartphone out when you're walking around somewhere unfamiliar.

It's hard to see, especially considering the nitty-gritty of trying to make it work nicely with a smartphone, which consumed about half an hour of our time as we tried to join wi-fi networks (it can't join password-protected ones).

The future
I can see niche markets that will embrace Glass. Anyone whose job requires having both hands free or looking up details (in a manual?) will find it a boon. For the ordinary person, though, I can't quite see it. Most people don't walk around needing to Google things.

In a world where we're already in a state of constant distraction, this seems like a step too far for no obvious return. Glasses used to be something that helped you to see the world better.

For the average person, Google Glass feels like something that would make you to see the world less, and replace it with a world seen through a giant corporation's interests, funnelled through a tiny screen suspended above one eye. — © Guardian News & Media 2013