Off the “paraffin grid” 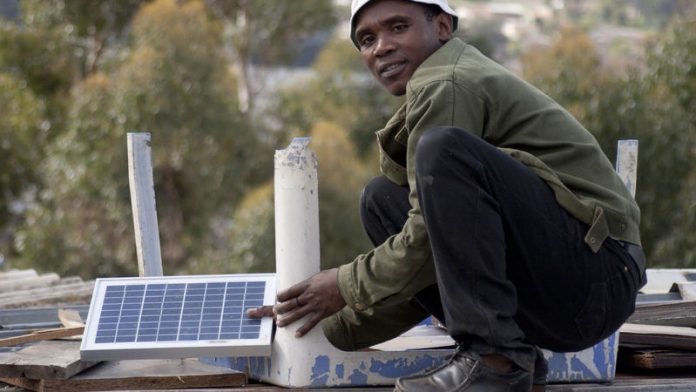 'Late one night, after I dropped off my workers, I saw a young girl studying under a street lamp," says Billy Hadlow, founder of Khaya Power in Stellenbosch.

"I could not understand why, with all the solar power and technology in South Africa, people still have to live like this. Everybody talks and very little is done.

"I went home and fitted a battery in a recycled five-litre can, never thinking that it would become a passion to take poor people and kids off the 'paraffin grid'."

Hadlow developed a power model appropriate for the poor communities he was targeting, one which enables users to avoid upfront costs by renting batteries.

Depleted battery packs can be exchanged at a charging station for a recharged unit at a rate cheaper than one litre of paraffin.

Lights and small appliances such as TVs, cellphones and small stoves can be powered by the units — even micro businesses can be run off them. For example, orphaned youngsters at an initiative called Time for Change are making a little money by cutting hair using the units.

"Khaya Power must be compared to paraffin and not Eskom energy," says Hadlow. "A Khaya Power unit can produce up to 146W a day. More than 2.3kg of CO2 is saved a day in every household using the units."

The original light that sparked the idea is the heart of the business. Khaya Power manufactures LED lights with a switch and a 5m flex cord.

Customers can buy these for R65, and then rent the battery and use it both for lighting and to run 12V appliances.

"The battery never becomes the property of the customer," says Hadlow.

Instead, a recharging station is run by a local agent in a manner similar to the model used for LP gas and it costs R10 a recharge.

This creates a job opportunity for someone in a community. In addition, some residents have been trained to manufacture the power units.

Hadlow used to work in forestry, but for the past 15 years has run his own handyman business. He has sunk much of his own funds into this dream.

"Khaya Power offers an alternative to paraffin, it creates jobs and provides much needed micro utilities to trigger the creation of small enterprises — all this from a humble, recycled 5-litre can," he says.

"One family's shack was damaged in a fire, and the only items they managed to save were the lights and Khaya Power battery. It was mobile and so they could keep going and start again," he says.

Slice of life: ‘Feeding the homeless saved me’