The Nkandla files: Project railroaded from the start 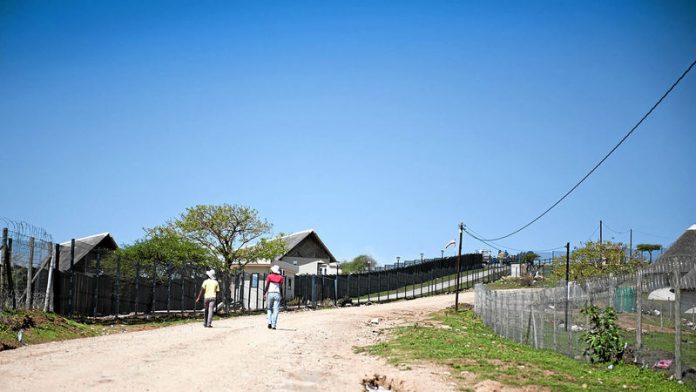 In May 2009, a fortnight after Jacob Zuma's presidential inauguration, a team of officials was dispatched to Nkandla to investigate how best to secure his home.

Led by police, military and intelligence officers, who laid down security requirements, the public works team of professionals put together a detailed "scope of works".

Their extensive recommendations included the upgrading of access roads, perimeter fencing, fire-fighting, sanitation, a heliport, air conditioning with biological filters in a "safe haven" and, puzzlingly, a "revamped" cattle kraal.

The department of public works's chief quantity surveyor, Ron Singh, ran the numbers, reporting that the job would cost just less than R28-million.

The department's national office fired instructions off to its Durban branch, where regional manager Kenneth Khanyile would oversee the procurement of specialists to plan, design and construct the upgrades.

A handwritten note by a member of the budget committee that approved the funding gave an early indication that the project was being railroaded. It read: "Due to the urgent nature of service, service must proceed and funds will be made available periodically, as and when savings materialise from prestige/PWD [public works] budget."

This urgency and a willingness to sweep aside procedures was entrenched that October in 2009, when Khanyile described an agreement with acting director general Solly Malebye in which the Durban office would be given special powers to approve big Nkandla contracts worth more than R20-million.

The private quantity surveyors on the project, in turn, handed the department a list of contractors from which it would choose, again deviating from supply chain processes, Khanyile wrote.

By February 2010, the main building, electrical and civil contractors had been chosen. Among these were the major contractors, Bonelena and Moneymine, the latter having been hired earlier by Zuma. Moneymine's appointment by public works was also "essential", Rindel said, because the company "is trusted by the owner of the property [Zuma]".

According to internal records, public works had spent R4.1-million on the project by the end of that financial year, March 31 2010. Yet the first of three project phases had barely begun.

By June 2010, Rindel's project team at public works was ready to hand over the site to contractors for phase one of Nkandla, or "Prestige Project A", but they had not received official sign-off from the defence department or police.

Although Rindel calculated they would need just less than ­R40-million a year for two years to complete Project A, funding had still not been found.

His request was escalated to a national budget committee, recommending that the money be siphoned from two important programmes: inner-city regeneration and the dolomite risk management programme.

The contractors moved on to site that month.

In another supply chain management sidestep, Rindel's team appointed a security consultant without first getting approval from the regional adjudication committee. Justifying this three months later, he said the work had needed to start "immediately", apparently illustrated when the consultant was called "to accompany the [deputy director general] and minister [Geoff Doidge] on visits to the fencing and glass suppliers in order to expedite the work".

By then it was August, and Doidge was clearly coming under pressure from above to fast-track Project A.

In mid-September 2010, he set a "strict deadline" for the completion of phase one. Months later, when Rindel motivated for more funding because of serious cost overruns, he revealed the source of this pressure: "[Doidge] instructed this office to continue with immediate effect, as he was given a deadline by the principal to have the site operational by December 1."

"The principal" refers to Zuma.

Within a week of setting this deadline, Doidge and other senior police, defence and public works officials met at Nkandla, where the minister dished out instructions to get things done.

Justifying the cost overruns, Rindel explained that, at this late stage, the South African Police Service had submitted a "revised" scope of works. This had Rindel rushing to appoint more service providers – for the supply of bullet-resistant glass, a generator and prefabricated structures – with "emergency" permission obtained from Khanyile. Formal permission was again sought months after procurement.

According to Rindel, "the lengthy process" of waiting for approvals "could compromise the security of the principal and would not be ­tolerated. This was made very clear by the top management of the police service and the department of defence."

But the department's chief quantity surveyor, Glenda Pasley, was worried. She wrote to Rindel: "The scope of works and costs have increased substantially on the project over the past few months, giving rise to serious concerns about what control mechanisms and parameters are in place."

She also said there was no clarity on how the enormous cost would be split between Zuma and the state.

Another surveyor, Dumi Gqwaru, lamented the state of the contracts: "If a contractor were to be nasty, she would take us to the cleaners … I could not agree more with [Deputy Minister Hendrietta Bogopane-Zulu] in referring to this project as 'project went wrong'."

Meanwhile, Zuma shuffled his Cabinet at the end of October, sacking Doidge before the deadline could be met.

The replacement minister, Gwen Mahlangu-Nkabinde, enthusiastically grabbed the Nkandla baton. In her first week in office, she submitted a detailed report to the president, reassuring him that everything was on track for December 1.

But the project team missed Zuma's deadline by three weeks. Evidently this caused consternation in high places. In a letter motivating for more fast-track measures, this time for phase two, Rindel said speed was "essential" because "the state already delayed the owner of the property [Zuma], and this caused much embarrassment to the state".

When the state prepared for the phase two contracts, it once again negotiated with Bonelena and Moneymine. As for the latter, this was once again according to Zuma's wishes.

According to a document discussing Moneymine: "[Bogopane-Zulu] confirmed that the principal indicated that he does not want other contractors on site in phase two."

As phase two got under way, officials reluctantly began to wrestle with the question of how much Zuma would pay.

Meanwhile, Khanyile asked for permission to deviate once again from procurement prescripts for a security detection system. His request revealed another Zuma-driven deadline and a presidential secrecy requirement.

"The instructions of the owner must be respected," said Khanyile. These were that information should be contained and the project had to be completed by October 30 2011 "as per instruction from the principal".

The state quantity surveyors now complained that they had been sidelined. Pasley wrote to Rindel: "We are no longer in touch with the project as you have excluded us." And months later: "We have to date not been briefed by you." She wanted to see financial reports and cost-allocation decisions. "This is of serious concern."

Late in the year, and early in 2012, Rindel submitted another batch of requests to pay contractors extra after further cost overruns.

By March 2012, as the financial year came to a close, the state had spent almost R190-million on Project A.

Throughout 2011, complaints flowed over contractor Bonelena's missed deadlines and, early in 2012, a consultant recommended that the contractor be fired. The company had cash flow trouble and was at the root of serious delays.

This appeared to elicit attention from the highest levels, because in January 2012, newly appointed Public Works Minister Thulas Nxesi met the company's owner, Thandeka Nene, in the first of several personal engagements.

In April that year, steps were taken to terminate Bonelena's contract but the company disputed it. Official memos recommended that an amicable settlement would be best to prevent information leaking out through a court battle.

This softly-softly approach – Nxesi and Nene's personal liaisons included – continued even after Bonelena filed for liquidation in July.

Even the state-owned funder, the Industrial Development Corporation, came to Bonelena's rescue. According to The Mercury, this year, the corporation bailed out Bonelena with R10-million, despite the fact that the company already owed it millions.

In correspondence with the national office, Khanyile put the problem plainly: Zuma's reputation.

"Court cases will result in public scrutiny … This is an unacceptable risk to this office and could result in political fallout that could possibly influence the principal's [Zuma] political position very negatively."

In October, press leaks resulted in a major public outcry and, as phase three of Nkandla began, internal reports projected Zuma's Project  would cost the state as much as R273.8-million – nearly 10 times what had been proposed back in 2009.

We hope Zuma’s application to avoid being arrested is successful, Duarte says

Children are being deprived not only of education, but also nutrition. Governments and the international community must secure these inalienable rights
Politics

Zambia will hold presidential elections in three weeks’ time amidst an ongoing economic crisis and rising political tensions. These are the five most important things to look out for in the elections
Advertising