Wise ways to use wetlands 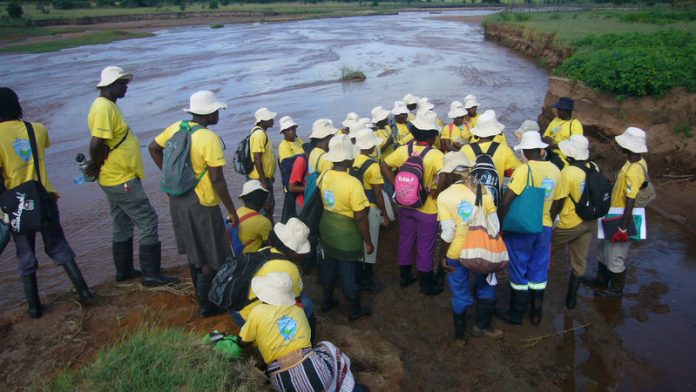 When a belligerent community member stood up to give his feedback on a workshop about looking after wetlands, the facilitators sucked in their breath waiting for criticisms. Instead he rose and said: "This course has really taught me patience and to respect what women can achieve."

Sharon Pollard, director of the Association for Water & Rural Development (Award) recalls: "We felt heartened by his remarkable shift in consciousness."

The change of mindset came about after a workshop was held with communities in Venda to encourage the wise use of their wetlands.

With its slogan, "using them doesn't mean we have to lose them", the Wise Use of Wetlands Project works with communities to ensure long-term sustainability of rehabilitation efforts.

The project started in response to issues that the national Working for Wetlands programme noted following rehabilitation efforts.

Although some 175 wetlands had been physically rehabilitated by the programme since its inception in 2000, ownership and attitudes towards the rehabilitation efforts threw into question the long-term sustainability of the work.

"It was clear that support for good stewardship by land owners and users was necessary," says Pollard.

Partners in the Wise Use Project include Working for Wetlands, the Mondi Wetlands Programme, RipZone, the Ha-Makuya community and the Mutale Rivers, Springs and Trees Project.

Award works on the social aspects of the project. Does this mean its facilitators are "teaching" wise use? "We don't teach," says Pollard. "We engage in co-learning. Our work is research and action based. Through getting involved in research, communities bring about transformation in their own lives."

The project has worked at two sites, Mutale and Ha-Makuya, in the communal lands of Venda in the far north of the country.

"Degradation of wetlands has a number of faces: economic, social and political, and all must be addressed," says Pollard. "Success lies largely in the hands of the local users. They need to do their own research, planning and action. The process builds social capital such as trust and identity that support responsible custodianship."

She says that addressing physical problems such as soil erosion deals with the symptoms, but not always the cause of wetlands degradation.

People depend on wetlands for grazing, food crop production and thatching material, and Wise Use aims to understand the delicate balance between use and protection.

"It became clear that continuous and meaningful engagement of wetland users is critical for rehabilitation and beyond," says Pollard. "At the workshops we tell participants, 'we are not the specialists. This is your wetland; you are the experts'.

"We discover what people know. They get recognition for their knowledge. This boosts them because they realise that someone is interested in what they know. They become attentive to the process."

Participants move from being hearers of information to identification with information. A female participant in one of the workshops says: "We had to learn to trust one another. I am confident in who I am. I can report to the community."

The Wise Use facilitators comprise 40 community-based researchers and monitors who act as mediators. "Venda was a particularly good place to work because people have a long association with the land," says Pollard.

The community mediators have significantly raised the profile of wetlands and will soon reach a stage where they act independently of Award.

In Mutale, without any outside facilitation, the process has led to the establishment of a local non-profit organistion known as the Mutale Rivers, Springs and Trees Project.

"This points to responsible local environmental custodianship that ultimately might mean we can use our wetlands without the risk of losing them," Pollard says.

"The principles of this approach are robust and yet sufficiently flexible to be tried elsewhere, and Wise Use will soon be looking into adapting the approach for land under private tenure."