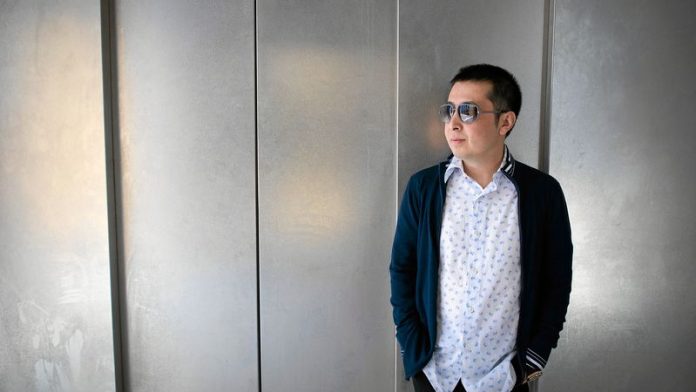 Although A Touch of Sin’s themes of injustice and exploitation are familiar territory for Chinese director Jia Zhangke, its style is a stark departure from his usual contemplative tone. Critics have described it as “ultraviolent” and compared it with Quentin Tarantino’s work.

The slight, unassuming 43-year-old said he drew inspiration from morally inflected westerns and martial arts movies. His four tales, which draw on real events, include that of a spa receptionist fighting off a lecherous customer and a miner armed with a gun and intent on revenge against corrupt officials.

“To fight violence with violence is a tragedy. This film seeks the roots of violence.”

In the past, he said, social change had led to personal crises, but the problems had been partially hidden.

“Partly it’s that social problems have been more intense than before … In the past, the corruption was not beyond imagination, but now, the reality is surreal to us … The [former] minister for railways went on trial and it was said he had more than 300 properties. The gap between rich and poor is also increasing,” Jia said.

“The bigger the difference is, the more [these] hidden, disturbed emotions grow.”

But ordinary people were also increasingly aware of the injustices, he said, and their tolerance was shrinking.

“In recent years people have chosen to solve [their personal crises] in a violent way,” he added.

This month, 47 people died in a bus fire in Xiamen, which police say was started by a suicidal man after a long dispute with local officials over welfare payments. “In China there is more and more [violence]. You just saw the bus case. Last year in Guangdong a man didn’t get his salary from the boss and set fire to an underwear factory [killing 14 young female workers].”

Jia sees silence in the face of wrongs as a sin, but not everyone agrees, he said.

A vocal critic of controls
“Chinese society is strange: people feel if you talk about sad or tragic things it will have even more of a negative impact on society. It’s really strange logic. If you can’t even face it in a film, how can you face it in reality? If even films cannot refer to [violence], it will always be unfamiliar to us and violent incidents will increase.”

A Touch of Sin scooped the best screenplay award at Cannes last month. Jia has long received international acclaim for films such as Still Life and 24 City.

But the reaction of authorities at home is perhaps more remarkable. His producer urged him not to make the movie because it would be banned, like his early works. Instead, it has been approved for release later this year with only minor changes.

“Chinese censorship means a policeman has to be a good man; you can’t change that,” he said.

“But more important is self-censorship.”

Jia has been a vocal critic of controls, but said these days he could talk to censors and explain why he wanted to include particular aspects.

Not everyone approves of his decision to work within the existing system. In 2009 he withdrew from a film festival at which the exiled Uyghur leader Rebiya Kadeer was speaking, though he said it was his own choice.

But he has also tested its boundaries and continues to press for more space. Real cultural reforms are urgently needed, including “media freedom, freedom for writers … how we face history … The cultural system is the basis for reforms to the political system,” he said.

The director, who grew up in the countryside and was rejected twice by the Beijing Film Academy before his acceptance, has always been drawn to those on the margins. His first feature, Xiao Wu, was about a pickpocket.

Though perhaps better appreciated abroad than at home, he does appear to have one unexpected admirer domestically.

China’s new leader, Xi Jinping, reportedly noted one of his films approvingly at a private dinner with the then United States ambassador some years ago.

“Whether it’s a Chinese citizen or the Chinese leader, we all live in the same country and face the same life. I’m happy it aroused the same feelings,” Jia said. — © Guardian News & Media 2013