Carrim wants to talk to all stakeholders 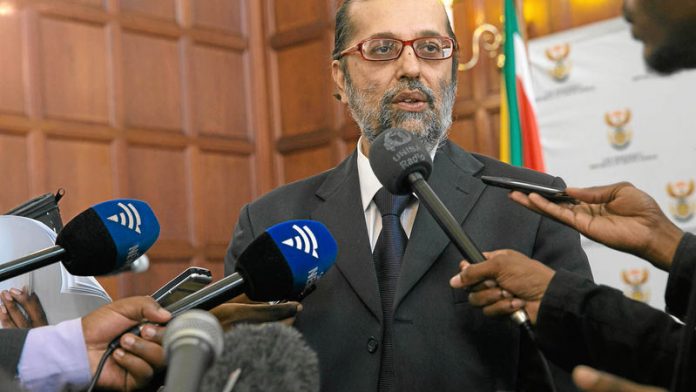 He then reminds them that he trained as a journalist. In addition to completing a BA honours and master's degree in sociology at the University of Warwick in the United Kingdom, he also holds an international diploma in journalism from the Darlington College of Technology in the UK. For the past 10 years, he edited the South African Communist Party's (SACP's) publications, African Communist and Umsebenzi.

"It would never have occurred to me in 1976 and afterwards while studying journalism that one day I would end up as minister of communications," said Carrim. "There is a slightly surreal feeling to it."

Talking to the Mail & Guardian after being sworn in on Wednesday, Carrim said he was acutely aware he had entered a "challenging terrain".

With many former SABC board members having fallen out with his predecessor Dina Pule – who was accused of meddling and thereby undermining the separation of powers between the public broadcaster and the executive – it was never going to be an easy job.

Carrim's promotion came after President Jacob Zuma announced the axing of Pule – as well as Minister of Co-operative Government and Traditional Affairs Richard Baloyi and Minister of Human Settlements Tokyo Sexwale – at the Union Buildings this week.

Carrim said he was not professing to having a magic wand. After moving the day before from his previous post as deputy minister of co-operative governance and traditional affairs, he said the next two weeks would be primarily a "listening and learning process".

Considerably better
"We need to act swiftly but, at the same time, pragmatically and consensually," he said. "Time is fast running out. Several of the issues that are currently on the agenda have been around for some time and, although there has been significant progress, really, we have to do considerably better."

Although Pule was considered a liability in the Cabinet, as she was being investigated for irregularities by both Parliament's ethics committee and the public protector, Carrim's appointment is seen as a measure of the SACP's growing influence on Zuma's administration. His promotion and that of Lechesa Tsenoli to the post of minister of co-operative governance and traditional affairs are considered significant, as both serve on the SACP's central committee.

Carrim comes to his new post with a wealth of experience – he has been an MP since 1994 – and has earned a reputation as a diligent worker.

Depending on which side of the fence you sit, some might say the only blot on his copybook is that he was chairperson of Parliament's portfolio committee on justice and constitutional development when it oversaw the demise of the Scorpions.

In 2008, he penned an article in which he said that the majority in the ANC was not gloating about the pending dissolution of the Scorpions, which, he said, was meant to be an elite organised-crime fighting unit and the pride of the nation. But the Scorpions had become a source of division and, to reach greater consensus, all interested parties had been drawn in, including technical experts, members of the public and the Scorpions, and five models were considered to fight organised crime.

"Parliament didn't just blindly, hurriedly implement the [ANC's] Polokwane resolution on the Scorpions. Parliament is not some subcommittee of the ANC. We did not abandon our legislative role. We had extensive public hearings."

The down-to-earth Carrim is also a member of the SACP's politburo and credits his move to socialism to his love of reading newspapers. Coming from a lower middle-class Indian family, in which politics was not widely discussed, he said he read about petty apartheid issues in the press. It was made possible by the fact that his late father, Ismail, had taken out a newspaper subscription shortly before he died.

Socialism
"I saw in the papers these petty apartheid issues. I read that we could not go to the same beaches and there were nonwhite and white benches. It was a social awareness and partly a moral disaffection with the ­stupidity of park benches being segregated and the stupidity of separate beaches," Carrim said.

"I became increasingly aware of history, of the Russian and French revolutions, and I turned towards socialism from the age of 17."

Although he and Deputy Minister of Communications Stella Tembisa Ndabeni-Abrahams will have to move swiftly to resolve current issues, Carrim said they will consult public sector organisations.

"We also have to draw in more actively the expertise and experience of experts in this area, and also stakeholders. My own feeling is this area could do with a greater degree of consensus."

The responsibility to move forward expeditiously does not reside just with the ministry, he said, and has to do with service delivery. The National Development Plan, contested though it is in parts, and the New Growth Path, will provide a crucial impetus, he said.

"I will listen to a very wide range of stakeholders and we will see where we can go before the elections. But more importantly we want to create a more solid foundation in the ministry and the department."

New minister has a mountain to climb

Although the old SABC board is now dissolved and an interim board has been in place for three months, there are other headaches looming, such as the six-month delay in South Africa's long-awaited migration to digital television.

The government has had to concede that meeting the International Telecommunication Union's mid-2015 deadline is no longer feasible.

As communications minister, Carrim will have to weigh up the cost of his predecessor Dina Pule's failed defence against e.tv's court challenge to the set-top box access control system for digital TV.

Pule has been accused of not answering a single question from Parliament this year, and relations between her and other MPs had deteriorated. Parliament is itching to hear whether progress has been made with the finalisation of the specifications for set-top box manufacturing.

Carrim will also have to try to resolve the fractious relationships blighting delivery in the communications department. He will need to take action on the future of his director general, Rosey Sekese, who was found to have misled Parliament about her performance agreement.

Carrim will also have to fast-track the allocation of high-speed spectrum for wireless broadband services, and assess the broadband policy. – Glynnis Underhill