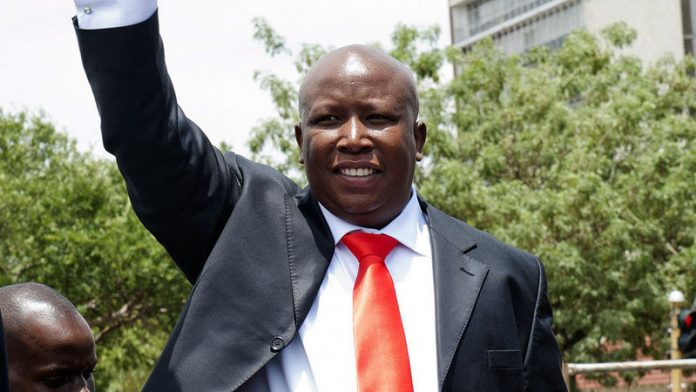 Former ANC Youth League president Julius Malema insists that his Economic Freedom Fighters (EFF)stand a good chance of toppling the ANC, and that they are the only credible alternative to the ruling party.

Addressing the media at Constitution Hill in Johannesburg on Thursday, Malema said the expropriation of land without compensation and the nationalisation of the mines and other key sectors of the economy are central to his organisation's yet-to-be-formed policy.

Malema and his followers wore military-style red berets reminiscent of the thousands who marched from Johannesburg to Pretoria in 2011 to demand economic transformation.

Malema said he was confident that if an EFF national assembly scheduled to take place in Soweto at the end of July resolved to form a fully fledged political party, they would secure millions of votes from ordinary people impatient for change.

"It is no secret that an absolute majority of all those who have responded are saying that EFF should be a radical, left, and anti-capitalist and anti-imperialist movement with an internationalist outlook that should contest elections in South Africa," said Malema.

"The ANC played a role in ushering in democracy but the situation now demands a new political party that will pursue and deliver economic freedom … if we resolve to form a party you can be guaranteed we will meet the ANC on the ground. We never lost. We even put [Jacob] Zuma as ANC president in Polokwane when everybody was afraid," he said.

Redistribution of land
"There isn't a single debate we lost when we were still in the ANC. If we resolve to contest the elections, rest assured that we will be a government in waiting … There are 30-million registered voters. Only 17-million voted. Where are the others? We will talk to them. There is going to be action everywhere. We will be among our people."

Malema said white South Africans were welcome to join the EFF for as long as they were prepared to support redistribution of land.

"Whites must be prepared to share the land. Who are we to say whites must be driven to the sea? The Freedom Charter says the land belongs to all who live in it but all of us must have something to share," Malema said to applause.

He has already met with a number of civil society organisations, including black consciousness activist Andile Mngxitama's radical September National Imbizo. Mngxitama said this week "their [the EFF's] positions on land and nationalisation are the same as ours. So, the affinity is clear."

The Imbizo has formally adopted a position document that moots a ­coalition with the EFF, but said that any engagement with Malema's group would be based on the ­acceptance of its people's manifesto.

Democratic reform
The manifesto is an Imbizo document that sets out the organisation's intentions, including changes to the South African political and parliamentary system, democratic reform, and demands that politicians and public servants use the same public services they legislate for the rest of the people and that members of Parliament aren't politicians but "revolutionaries".

"A rejection of the manifesto would expose the EFF as nothing but another ANC outside the ANC…" said the document.

The manifesto likens the EFF to the radical nationalism of Zimbabwe President Robert Mugabe and his Zanu-PF and states that this is the main reason the organisation is engaging with the EFF.

The Imbizo is an urban movement operating mainly in the townships. Mngxitama said they were busy with an audit but that their members number in the thousands.

Malema has also met with the Congress of the People and revealed he was in talks with a number of Cosatu unions. However, he said that his party would not enter into a coalition with the Democratic Alliance.

"Our enemy number one is white monopoly capital, which is supported by the DA. We will never get into bed with the DA," said Malema.