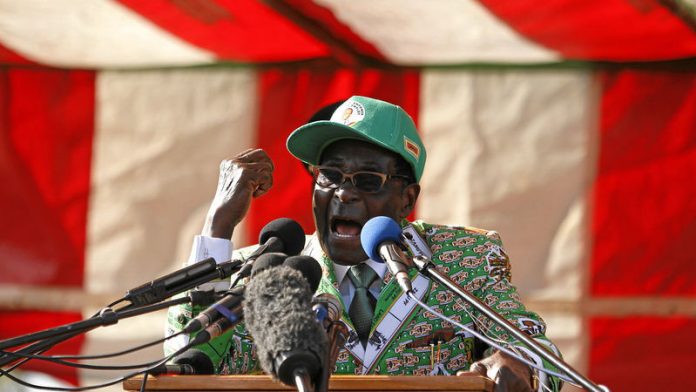 'We are here to correct the grave political mistake of 2008. We failed, we failed."

With that rueful tone, Zimbab­wean President Robert Mugabe begins his campaign last Friday for five more years in power, which he says is "the fight of our lives".

The up-tempo radio adverts that played endlessly that morning, with Right Said Fred's Stand Up for the Champions as a backing track, had promised a lively rally and promised there would be a "full bar and catering".

This is the same venue where, 33 years ago, a raucous crowd of more than 100000 welcomed Mugabe to his first rally after the war.

This time there are fights at one gate over free T-shirts, a stampede for free food and only token cheers for his speech.

This is Zimbabwe Grounds in Highfield, a township Mugabe describes at the rally as a "politically sacred place". This is the township where Zanu-PF was formed, and where his party, as in most urban areas, has lost all elections since 2000.

There are models, too. The leggy finalists of the "Miss Zimbabwe Global" beauty pageant are lined up near the stage, nervy smiles under green "Vote Zanu-PF" caps.

On the podium, Mugabe drones on. Once in a while, the old, plucky Mugabe emerges. "Gays," he roars at one point. The crowd stirs with anticipation, waiting to hear what new witty barb Mugabe has for gays this time. "You want to marry? Okay. I challenge you: Go ahead and marry, but if you don't make a baby in a year, I may have to arrest you." Roars of laughter all the way to the trees at the back, near where crowds are still fighting for Zanu-PF T-shirts and caps.

He knows he is once again leading a divided party into elections and pleads with his supporters to campaign for his victory.

He knows many did not campaigned for him in 2008, he says. "A loss for me, is a loss for you. This is the fight of our lives, a battle for survival," he says, pounding the podium, but only gently.

There is the inevitable dig at his rival Morgan Tsvangirai's scandals. "These people are only about chasing after different women; that's all they do."

Then there is the business about the Zim dollar, that one issue that makes every Zimbabwean wake up in a cold sweat, and one that every candidate should really avoid.

We cannot use the US dollar forever, he begins. We will have to look at ways of bringing back our currency, sometime in the future.

There are uncomfortable murmurs. Mugabe appears to be thinking out loud.

"Should we, should we not?" he asks himself.

"What if we back our currency with all our gold? Wouldn't it be strong enough? Maybe not now, of course, but sometime in the future. Maybe we will talk to [Gideon] Gono, the Reserve Bank governor."

Just as Mugabe is tapering off into his final words, pleading with supporters to campaign peacefully, a muscular Zanu-PF militant is swinging a stick at people trying to leave.

"The president has not finished talking yet. Go back."

His muscular supporter at the gate keeps on swinging.

In the 108 pages of Zanu-PF's election manifesto, the word "indigenisation" appears at least 156 times.

The party is not coy about this, declaring: "Only the indigenisation and people's empowerment reform programme can meet the goals of the people. There is no other alternative."

Under its plan, 1138 companies across 12 different sectors would be targeted over the next five years. The party believes the takeovers would realise $7.3billion in assets for the government.

The value of these assets would then be used as security against borrowings, which, Zanu-PF believes, would ultimately create total value of $29.2billion. The money would be used to rebuild the country's infrastructure, support agriculture, and fund education and health.

Mines form the bulk of the companies targeted under the accelerated indigenisation plan. The party values Zimbabwe's mineral reserves at $1.8trillion, of which diamond reserves account for $1.6trillion by its estimation.

By Zanu-PF's reckoning, its indigenisation programme would solve virtually all the country's problems. It would somehow fund everything from agriculture and youth projects to housing and roads, and would even create an "entertainment industry with international quality".

Zanu-PF says its indigenisation policy would create more than two million jobs and grow the economy by an average 9% annually by 2018. But the real Zanu-PF inevitably bubbles to the surface as the manifesto wanders back into more familiar territory.

It reminds voters of "the enduring and unforgettable fact that it is Zanu-PF which liberated Zimbabwe". The manifesto is "a solemn call from the wailing bones that lie in many places known and others yet to be discovered".