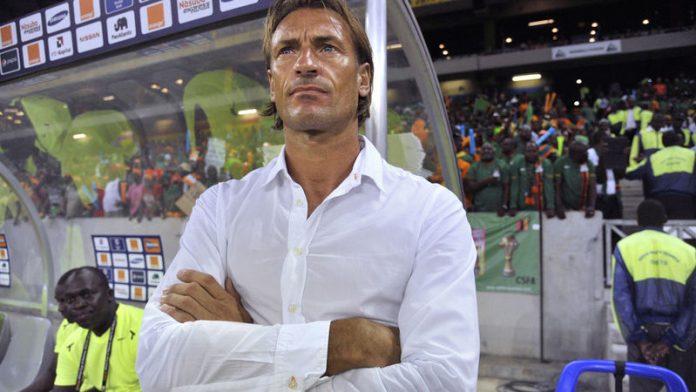 They face Mozambique on Sunday in the second half of a quarter-finals double-header at Nkana Stadium in mining city Kitwe.

Surprise qualifiers Lesotho, who topped a qualifying group ahead of Botswana and Kenya, meet Angola in the other match.

They were successful again in 2006, but the closest they came to glory since was collecting silver medals twice.

Although France-born coach Herve Renard has chosen an experimental squad, his side are favoured to lift the trophy.

National hero
And he accepts the pressure is on him and his team as they try and put a miserable year for the Copper Bullets behind them.

"Every Zambian believes we will win the Cosafa Cup this year, especially as we are hosting the tournament," admitted Renard.

"This means there is only one path for us to follow – the one that leads to the winners' podium in Ndola next Saturday."

Renard became a national hero in Zambia last year when his team emerged as shock winners of the 2012 Africa Cup of Nations.

After 120 goalless minutes against Didier Drogba-skippered Ivory Coast, the underdogs won a penalty shootout in Gabon.

But little has gone right for Zambia since with a disappointing Africa Cup title defence followed by poor World Cup qualifying results.

Verge of extinction
They failed to win at the 2013 Nations Cup in South Africa, drawing with Ethiopia, Nigeria and Burkina Faso and making a first-round exit.

And draws with minnows Lesotho and Sudan have left dreams of a first World Cup appearance on the verge of extinction.

The local stars were promoted to the first team for recent World Cup ties and offer experience amid exciting but untested talent.

Mozambique coach Joao Chissano has been in charge less than a month since German Gert Engels paid the price for a 6-1 World Cup drubbing in Guinea.

His Cosafa Cup build-up has been nightmarish with a spate of withdrawals owing to injuries and club commitments leading to 11 squad changes.

Striker Josimar Machaisse gave Chissano a timely boost by scoring in a 1-0 friendly victory away to Malawi last weekend.

Lesotho held Kenya 2-2 and Botswana 3-3 before defeating Swaziland 2-0 to top Group B on goal difference and book an unexpected last-eight place.

The Botswana clash stamped Likuena (Crocodiles) as a team to watch when they came from behind twice to level deep in stoppage time.

Angola dare not concede any penalties as midfielder Ralekoti Mokhahlane has proven his worth by converting two spot kicks.

Striker Thapelo Tale has also netted twice and defender Nkau Lerotholi and strikers Mojela Letsie and Tsepo Seturumane once each.

A team averaging 2.3 goals a game and full of never-say-die spirit could trouble Angola, even though they are 65 places lower on the world rankings.

Angola prepared under Uruguayan Gustavo Ferrin with 1-0 home and away victories over Swaziland in a 2014 African Nations Championship eliminator. – Sapa-AFP