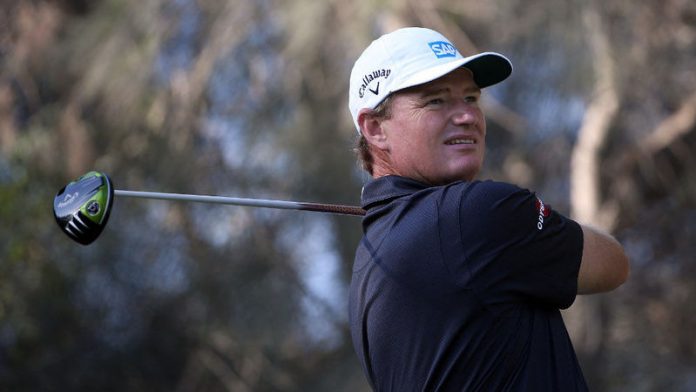 Els has claimed four major titles and remains hungry for more. That appetite could prove especially pertinent this week with the Open returning to Muirfield – the venue for Els’s last major victory, in 2002, before his dramatic success at Royal Lytham & St Annes last July, one stroke ahead of runner-up Adam Scott.

“But who cares? I really believe that I have a couple of majors left in me and I think I can keep going. I have got everything sorted, business and all that stuff, so I can concentrate and play golf. I have nothing stopping me; it is sport, it is funny, but I will give it as good a shot as I can.”

He adds: “That is what makes golf so great; we are the only sport where you can compete as a fortysomething and at times beat twentysomethings. It is a wonderful sport that we play.

“If it wasn’t for golf I would be selling hot dogs on the beach, but I have golf and I can compete and win. I am looking forward to the future and after, maybe at 55, I can go and sell those hot dogs.”

Els is generally priced at about 25-1 by bookmakers to complete the remarkable achievement of back-to-back Open wins and consecutive successes at Muirfield. “It doesn’t make any difference at all,” Els says of such generous odds. “Muirfield is a wonderful venue where we have done well. I have just got to do my own work, get my game sharp and go from there. Whether you are the favourite or not doesn’t mean a thing. I think we have proved that.”

Huge boost
Els’s confidence is endorsed by his victory at the BMW International Open in Munich last month. There, he held off the challenge of another fortysomething, Thomas Bjorn.

“That was a huge boost,” Els explains. “I had opportunities in Germany to really pull away from the field that I didn’t quite take, but it was winning under quite a lot of pressure. Winning always takes quite a bit of doing, but it really reconfirms my belief in the stuff that I have been doing with Sherylle [Calder, his visualisation coach] and so forth.

“That was part of the reason that I wanted to play in the Scottish Open, to have a run under pressure and take it into the Open. The Open means a lot to me, especially going to Muirfield, so I feel good about my chances.”

Els has played four rounds at Muirfield within the past three weeks, thereby witnessing a notable change in conditions because of a spell of dry weather. Els now describes the East Lothian links as “fiery” and a “real, great test”.

That was not, of course, the case 11 years ago. The third round of the 2002 championship was overshadowed by a spell of horrendous weather in which Tiger Woods slipped to an 81 and others similarly crumbled. Els, however, stood firm in holding the Open lead after 36, 54 and, crucially, 72 holes.

“Well, 2002 was a funny one because I played good golf at the start of the year and then my game kind of left me at the US Open, where Bethpage was brutal,” Els recalls.

“It was one of those great tests that I really love and luckily I had my game – I found my game, so to speak – basically, it was a last-minute thing. On the Wednesday I found something on my swing, which was fortunate.”

This week, Els has a room booked at the famous Greywalls Hotel, which housed Nick Faldo for his Muirfield Open wins in 1987 and 1992 as well as Els himself a decade later.

“With technology and knowledge of the game, experience is proven against a guy that doesn’t quite believe that he is quite ready to win,” says Els. “Other guys have done it, won a lot of tournaments. Tom Watson almost showed that when he was bloody 61 or something. So there are going to be some great stories written in sport still.”