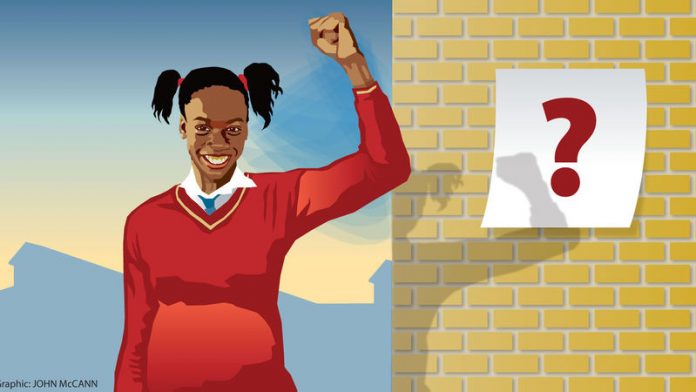 The Constitutional Court's judgment last week in a case concerning schoolgirl pregnancy has been warmly and justifiably welcomed for its strong affirmation of the rights of pregnant pupils.

But it has been less remarked that the court was far more equivocal – indeed, strongly divided – regarding the other pressing matter on which it was asked to pronounce. This concerned the balance of power between provincial education departments and school governing bodies, and in particular the right of the former to intervene in the latter.

The case involved pregnant pupils at two Free State schools that had forced the girls to absent themselves for varying durations both before and after giving birth. The court treatment of the schoolgirls' plights was sympathetic in arguing that pregnancy provides no lawful grounds for prejudicing a girl's right to education.

It is understandable that this is the facet of the Constitutional Court's 145-page judgment that should have elicited not only most attention but also the most applause. Both historically and to this day, some pregnancy policies adopted by schools have often looked not only thoroughly discriminatory but also unpleasantly gender-punitive.

Main and minor
But the judgment and its implications get more complicated when one factors in that those 145 pages are made up of a main judgment and a minority one, and that between them not all is sweet judicial harmony.

Even on the sympathy expressed for pregnant schoolgirls, there are significant differences of emphasis between the majority judgment, which Justice Sisi Khampepe penned, and the minority one, the work of Justice Raymond Zondo – significant because they relate directly to the court's division over the balance of school governance powers.

For Khampepe, the pregnancy policies of the two Free State schools "prima facie violate constitutional rights" and should be "reviewed". However, this main judgment also finds it "appropriate for this court to refrain from making a declaration of [the constitutional] invalidity" of the policies, partly on the grounds that the schools had not made any submission on their legal justifiability.

But the Zondo judgment appears to take it for granted that the policies are indeed unconstitutional. "I have immense difficulty with the notion that a policy document produced by a school governing body may make provisions that are inconsistent with an Act and even the supreme law of the country, the Constitution," his minority judgment said.

Principle of legality
"I have even more difficulty with the proposition that if, in a case where a school governing body has issued a policy that is, or that contains provisions that are, inconsistent with an Act or the Constitution, the [provincial head of department] instructs the principal not to act in breach of an Act or the Constitution, his conduct is in breach of the principle of legality."

By contrast, it is this "principle of legality" that Khampepe's main judgment insisted upon in finding that the Free State head of department did not abide by it. Here, what the court was asked to decide was whether the head had the power to intervene as he did when he ordered the principals of schools whose pregnancy policies he deemed illegal not to implement those policies.

The head of department was the applicant to the Constitutional Court: he asked the court for leave to appeal against the interdict the Supreme Court of Appeal had upheld against his intervention following a high court ruling to this effect.

The Khampepe judgment granted him leave to appeal but dismissed his appeal against the Supreme Court's judgment. It is the first sentence of Khampepe's judgment that provides its keynote and lodestar: "State functionaries, no matter how well-intentioned, may only do what the law empowers them to do."

Khampepe found that there were other legal paths to challenge the schools' pregnancy policies that the departmental head had not taken, such as suspending the governing body's powers or taking the body to court.

Not off the hook
Importantly, though, this main judgment by no means let the two Free State schools off the hook. On the contrary, it ordered them to review their pregnancy policies, to show the court that they were taking "reasonable steps" to do so, and to submit their revised policies for the court's perusal.

So why, if the head of department was "well-intentioned", and if the schools' policies appear to violate constitutional rights, did the main judgment dismiss his appeal against the Supreme Court?

This is because a "complex interplay" of constitutional considerations is at stake, the judgment said: "On the one hand, the rights of pregnant learners to freedom from unfair discrimination and to receive education must be respected, protected, promoted and fulfilled. On the other hand, interactions between organs of state when discharging their obligations under the Bill of Rights must take place in accordance with the provisions of the Constitution and the relevant legislative framework.

"The facts of this case give rise to a complex interplay between these two highly important sets of constitutional considerations, which interplay should be authoritatively determined, at least to the extent relevant for present purposes, by this court. It is thus in the interests of justice for this matter to be heard. I therefore grant leave to appeal."

Khampepe is elegantly nuanced on the delicacy of this interplay but it is ironically this very quality that might leave those who most need guidance here on the balance of powers – provincial authorities and school governing bodies – still in the dark.

Zondo's judgment arguably put its finger precisely on this uncertainty: "The main judgment fails to address the question of what the [provincial head] is required to do where there are no reasonable grounds for him to withdraw the function of the school governing body and yet the school governing body is requiring the principal to implement an unconstitutional and unlawful policy in violation of a learner's rights entrenched in the Bill of Rights and the learner or her parents appeal to the [head of department] to intervene to protect the learner's rights or where they threaten legal action."

For this clarity, it looks as though we might have to wait a little longer – for the Rivonia admissions case, in which the Constitutional Court's judgment is still expected, and for the appeal Khampepe so scrupulously granted.