Spill the coffee beans and get people talking 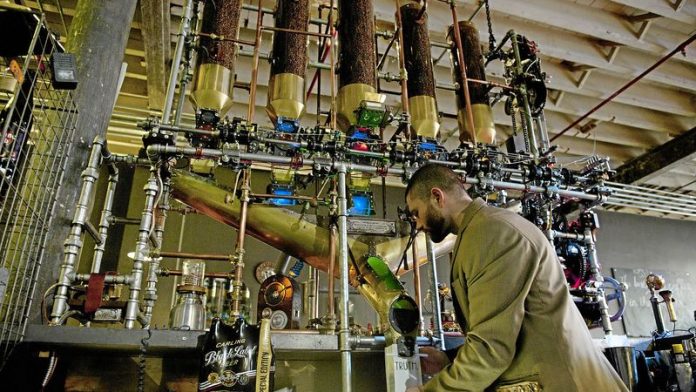 Last year, he cranked open the doors to the new Truth HQ, decked out in a bespoke steampunk interior by designer Haldane Martin.

Local costume and millinery specialists the Little Hattery were tasked with creating staff uniforms that rival an opera wardrobe.

Steampunk is an aesthetic that brings together Victorian analogue technology and fashion, and transposes a futuristic science fiction narrative on it.

Or, as the joke goes, “what happened when goths discovered brown”.

Most famously seen in Wild Wild West, the subculture started surfacing when visual websites such as Pinterest and Tumblr brought the images into mass circulation, and steampunk-maker websites such as Etsy connected artisans with steampunks all around the world.

Events such as Burning Man in Nevada and the South African variation, AfrikaBurn, in the Karoo, have drawn gatherings — as per the Steampunk Saloon at the AfrikaBurn festival in May.

Donde “is steampunk”, according to Martin, who proposed the concept; the caffeine-prospecting techie has spared nothing in bringing to life an entire world at Truth HQ. The design has been short-listed for the world Restaurant and Bar Design award, the only finalist from Africa. The winner will be announced in September.

Theatrical showpiece
“It’s been fantastic. We’ve taken a spot that everyone said wouldn’t work, in the Fringe, and we’re probably the busiest coffee shop in Cape Town,” enthuses Donde.

“We wanted a signature piece that really said: we’re about coffee.”

This is where industrial designer and artist Chris Jones got involved in turning the coffee dispenser into a theatrical showpiece.

After his first proposal to Donde, which was too decorative and not functional enough, Jones spent a week on YouTube watching elementary engineering videos. He came back with a Meccano-like contraption that was built using reclaimed bicycle gears, cranks and pulleys, and used lights, bells and whistles for theatrical effect.

“It was like treasure hunting through a mass of rusted old metal to find the right piece.” He then customised his finds at the Fab Lab in the Cape Craft and Design Institute.

Fab Labs are free-to-the-public design workshops, conceptualised by MIT professor Neil Gershenfeld, and are found all around the world.

Looking across the coffee shop at the sea of averted faces lit by laptop screens, your gaze stops at the table right beneath the contraption. They’re all looking up, mouth agape at the retro-tech of a Rube Goldberg-like chain effect that fills a packet with 215g of beans. Time travels in those two minutes.

Such is the curious case of the inefficient coffee contraption.