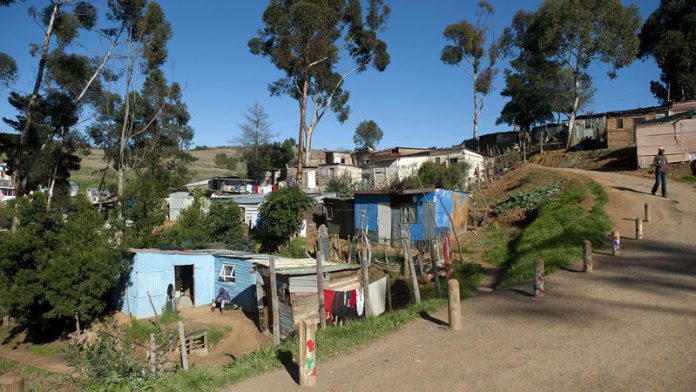 It’s Tuesday morning in the Enkanini informal settlement in Stellenbosch, and most of the activity is taking place around the communal toilet block and its water supply.

Women are washing clothes in brightly coloured plastic tubs and children play around them like orbiting planets.

On the one side is a view of picturesque mountains, and on the other is a climbing hill of tin and wood shacks with narrow, muddied paths running between them.

This is one of the seven 10-toilet ablution blocks — a total of 70 municipality-supplied toilets — in the settlement of more than 2 500 households and about 5 000 people.

Enkanini, which abuts the low-income semi-formal settlement of Kayamundi, shot to international fame because it is the testing ground for the iShack project.

It aims to retrofit shacks with insulation and solar power, but another and much-less reported part of the project is the Sustainability Institute’s work in piloting sanitation projects, a collaboration between Stellenbosch University and engineering consultancy Maluti Water GSM.

The battleground
The Western Cape has become a battleground over open toilets, the provision of sanitation and damaged or non-existent sewerage infrastructure; recently activists dumped human faeces on the steps of the provincial legislature and threw excrement at premier Helen Zille’s motor convoy.

Although the provision of four toilets — shared by 20 families — is “a drop in the ocean compared to the scale of the challenge, we want to use it as a marketing basis to create demand through word of mouth”, says Lauren Tavener-Smith, a Stellenbosch University doctoral student based at the institute.

The problem, she says, is more difficult than just supplying a toilet; supply-driven strategies are riddled with maintenance issues.

“For effective long-term functionality participation by organised residents is required and their involvement in operations, maintenance and repair may be key to linking infrastructure upgrading to job creation — beyond digging holes and laying pipes,” she says.

Still waiting for services
Xoliswa Makaula has been living in Enkanini for two years. Like many women in the settlement she does not walk around at night. “It’s too dangerous. You keep a bucket in your house [if you need to go to the toilet].”

Her main gripe against the municipality is that the settlement is not electrified. “They’re not doing their job,” she says.

The lack of light at night makes the walk to the toilet block, about 250m away, a treacherous labyrinth of slippery muddy pathways with the possibility of assault or worse.

She is not part of the Sustainability Institute’s toilet initiative, but says that she wants to be.

Nobuhle Ntsokotha is one of the participants in the toilet initiative and co-ordinates the five households that use their one-litre flush toilet.

Ntsokotha is falling asleep on her feet, having just come off night shift packing bottles at one of the wineries in the area, but by day she is available to the project as a co-researcher.

Access to clean toilets
She has been living in the township since 2006 and says, “It’s a nice place, but we suffer [from the lack of] electricity” and refers to the fire that destroyed about 40 shacks in January this year.

Having access to a clean toilet has made a difference to her life: “The toilets from the municipality are blocked every day and this one is closer to our homes.”

She shows us the single concrete toilet block with its combination lock on the door. Inside is a small basin and soap dispenser, and a bucket on the floor filled with water.

“It flushes with two jugs … [and without] using water from the tap,” she says gesturing toward the toilet.

“The structure and fixtures cost R3 000 to R3 500 if you buy it off the shelf without the downstream infrastructure,” says Jonny Harris, who is part of Maluti GSM.

The upgrading experiment is a joint initiative by the Sustainable Institute and Maluti GSM, and is funded by the National Research Foundation and the Water Research Commission.

When asked whether residents would be interested in paying for the front and back-ends of the system, Tavener-Smith bristles with indignation.

“We’re operating in a capital subsidy environment. We have back-end subsidies [in our sanitation]. Why should the poor pay for capital?”

And there is demand for more toilets, two for individual households and two for groups of five.

The waste from the four toilets is connected to a bio digester, says Harris. This is linked with the local sewerage.

He says: “Anything above this [gesturing to houses further up the hill] can be served by the same system because of the gradient [of the hill].”

Tavener-Smith adds that, “this digester has capacity for another 20 households right now” and then notes that the hilly topography has defined the demographic of the township, which is young. “You can’t be old here,” she says.

The digester is kept as discrete as possible so that people do not lift the lid and dump their refuse in it.

It is next to the site of the Sustainability Institute’s research centre, which is being constructed.

Big plans
However, Enkanini resident, co-researcher and entrepreneur Yondela Tuyawa has big plans for the bio digester, which he wants to use as a gas source for a restaurant.

“A fast food outlet, [servicing] people coming to Enkanini” and the research centre, he says.

He says that one of the main problems in Enkanini is the lack of leadership structure.

“We don’t have a voice from the people to the municipality. Everyone listens and listens, and then comes back with a different story. There is no progress because of this,” Tuyawa says.

Ntsokotha refers to the community councilors and ward committees: “You can’t do anything without councilors.”

When asked where they live, she points into the distance between the distant mountains and township. “On the other side of the corridor. They live in a house.”

A fragmented community
Tavener-Smith sees this as a fundamental issue in Enkanini’s struggle to get services — whether sanitation, housing or electricity.

“The community is fragmented, there is no collective voice. In this context, ‘participatory’ development is tokenism. We measure our effectiveness on the ability of the community to engage with government,” she says, adding that the focus is on human capacity building.

“We are eyeing [toilet] replication through building capacity and attracting subsidies.”

They also need to overcome distrust from the community, and community distrust of the municipality.

Tavener-Smith said that when they were setting up the sanitation pilot project, people asked: “What are we paying for, how much will it cost and who is making the money?”

Tayawa acknowledges that there is suspicion of the researchers in Enkanini: “Before people know things, they question. But when we talk to them and clear things up, they understand what is happening.”

Although residents are not happy with the municipality’s service delivery, Tayawa says that he is no longer sure what people in the settlement think about the municipality: “At the last meeting with informal settlement management [of Stellenbosch municipality], they seemed more interested in partnering with us and they were willing to work with us.”

Repeated attempts by the Mail & Guardian to liaise with Stellenbosch’s informal settlement management were unsuccessful.

Not all toilets are equal
Toilets are not a “one type fits all” issue. At one end of the spectrum you have ventilated improved pit latrines — a hole in the ground, leading to a pit — to a six-plus-litre flush toilet found in a house in Sandton.

Some factors to be considered include the choice of toilet technology, the availability of water — whether fresh or grey water — sewerage and waste removal, and cleaning.

In South Africa, “the perception of water-borne sewerage as having a higher status results in many communities seeing it as a symbol of political equality to which they aspire”, according to a report published last year by the Water Research Commission (WRC).

While pit latrines are a “robust technology” and can provide sanitation in high-density informal settlements or sparsely populated rural areas that do not have sewerage, there is the issue of toilet-status aspirations and cleaning.

In a pit toilet the sludge becomes dry, and cannot be cleaned by machine due to consistency and people also often throw rubbish down the hole.

This dual purpose of waste disposal is often exacerbated when municipal refuse removal is sporadic or non-existent.

This is why the WRC recommends the one-litre pour-flush systems used in Asia, where the grey water can be poured into the cistern and used to flush the toilet with the sludge contained in a soak pit or a septic tank.

Conventional vacuums can be used to clean the tank and the use of grey water means residents do not have to use drinking water.

For a system to succeed in South Africa, it needs to address users’ needs for political equality and agency in service delivery, accommodate cultural, social and economic needs and interface with sanitation management at the municipal level, it says.

What to do about invaded land?
Although there are tensions between the municipality and the community, Enkanini is on Stellenbosch’s agenda.

“Possible development options for the Enkanini Settlement of Kayamundi, Stellenbosch” was the fifth point on the municipal meeting on May 7 this year.

“Due to these invasions, the majority of the families in Kayamundi reside in informal structure[s]. These informal settlements have continued to grow over the years and the population has doubled every five years and will continue to do so.”

An eviction order was granted in 2006/7 to evict the invaders, but the municipality failed to act on it and now it is “near to impossible for Council to act upon the eviction order, as the relocation of people would [involve] the provision [of] large tracts of land (about 10ha)”, according to the meeting agenda.

Also, it notes that the courts would not support the removal of 2 600 families.

This means that the council has to provide services to the informal settlement, but “it has service delivery challenges due [to] the topography and location of the settlement, resulting from the unplanned scenario”.

It is usually the most vulnerable in society who are most dependent on local authorities, yet they are the ones stealing from the poor
Read more
Advertising
Continue to the category
Politics