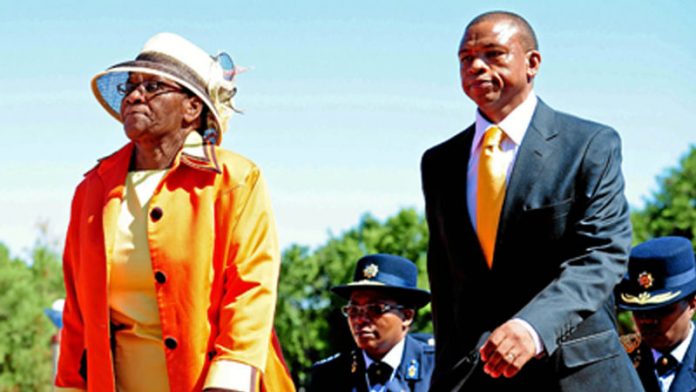 In interviews with the Mail & Guardian this week, both refuted claims that the ANC was planning to remove them, insisting their track record in government was beyond reproach.

After Mathale's removal, there were reports that Modise and Kiviet were next to be booted out to make way for Zuma supporters as payback for having supported him as ANC president.

Modise, aligned to a faction that wanted Deputy President Kgalema Motlanthe to replace Zuma, failed to be elected as ANC chairperson at the party's national executive committee at Mangaung last December and Kiviet was removed as a member of the provincial executive committee in the Eastern Cape last month.

After the Mangaung conference, Modise said she had been told that a powerful "corrupt syndicate" was targeting her because of her tough stance on corruption in her province.

"No one has informed me that I need to step down. Both the ANC and myself were shocked to read about this in the media," said Modise this week. She said she would continue to fight corruption, despite attempts to discredit her.

"The ANC did not send me to the province to be nice about corruption. I will not be apologetic for fighting corruption and I will never be."

Plotting
Asked whether she had approached the ANC provincial chairperson, Supra Mahumapelo, who is believed to be one of those allegedly plotting against her, Modise said she did not see the need to talk to him.

"I won't engage him. I will wait for the ANC to tell me whether I should step down or continue with my work. If I go to someone who is alleged to be behind the move to remove me, there won't be any objective discussion. So far I only read about these things in the media," Modise said.

Kiviet also said she was not aware of any moves to recall her.

"When the ANC deployed me, they did not say they are deploying me until when. So I continue to serve our people.

"The mandate of the ANC is very clear to all of us – to work towards addressing the five key priorities of crime, job creation, rural development, health and education. Today [July 17] I was at the Masibambisane programme with the president in Ngcingwana village in Dutywa. He was pleased with the work we are doing in the province. We are also going to a school in Mvezo [for International Mandela Day]," Kiviet said.

An ANC provincial leader in North West, who spoke on condition of anonymity, said Modise had been targeted because she had intensified her campaign against corruption.

Misgivings
"They are complaining that she's closing the taps and they can't make money any more and therefore she must go," the leader, who is also close to the embattled premier, said.

The leader said that, before the national conference, a faction that supported Zuma for a second term as ANC president was promised key positions in the government and that was the cause of the troubles in North West.

"This has paralysed governance and service delivery. Supra was promised that he will be premier. Now Mangaung has come and gone and Thandi is still premier because Zuma has misgivings about Supra and his group being in charge of the resource-rich province," he said.

Stan Mathabatha, Mathale's successor, was sworn in as Limpopo premier on July 18. He was an interim provincial chairperson of the South African Communist Party in 2010 and was chosen ahead of the education MEC, Dickson Masemola, and the ANC national executive committee member and former health MEC, Dikeledi Magadzi.

The anti-Mathale faction would have preferred either Masemola or Magadzi as premier but party insiders said Luthuli House chose Mathabatha because they felt he would unite the province. According to ANC insiders, the party was unhappy with the provincial task team led by Philemon Mdaka because of continued factionalism.

Key programmes
"The provincial task team is the worst thing ever to happen to the ANC in the province. The national leadership is now realising it has committed a big mistake by removing the provincial executive committee led by Mathale.

"The fact that the ANC national leadership overlooked the members of the task team for the position of premier shows it has no confidence in them. The fact that they even considered [former Reserve Bank governor] Tito Mboweni and [former ANC deputy secretary general] Sankie Mthembi-Mahanyele for the position means the provincial leadership is in crisis.

"Mdaka was going around telling everyone that he was taking over from Mathale, but that did not happen," said the ANC member.

Another provincial ANC leader complained that since the provincial task team took over, key programmes had come to a standstill.

"It is very silent here in Limpopo. When you are this silent 10 months before the elections, you must know you are in trouble. We don't know what they [the provincial task team] do. All we know is that they want all the tenders to be submitted to them," said the provincial leader who is sympathetic to Mathale.