It’s a boy: The royal baby is here

Cheering crowds rushed towards the gates of Buckingham Palace as it was announced that the Duchess of Cambridge had given birth to a healthy heir weighing 3.8kg.

The as-yet unnamed baby is third in line to the throne and in the direct line of succession after Queen Elizabeth II's eldest son and heir Prince Charles, and then his eldest son William.

"We could not be happier," William, the son of Charles and the late Princess Diana, said in a brief statement.

US President Barack Obama and his wife Michelle led international tributes to the "joyous occasion" while Canada was the first to hail the birth among the 15 overseas realms to which the baby will be heir. 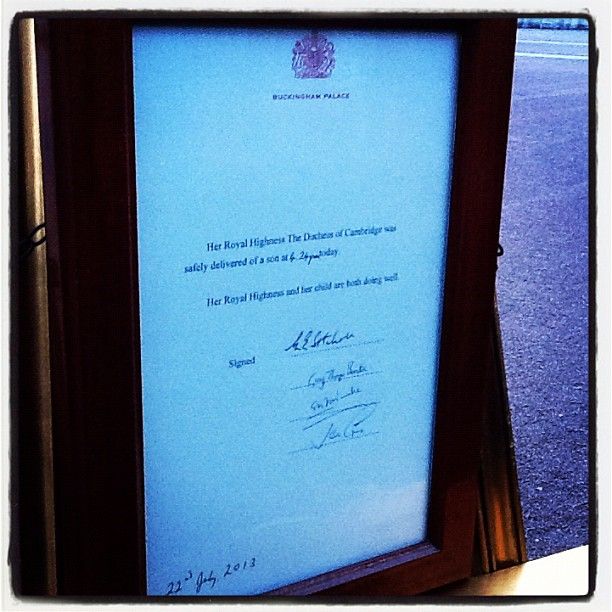 The former Kate Middleton (31) spent 10 hours in labour after she and William arrived around dawn at the private Lindo wing of London's St Mary's Hospital, Paddington, in central London.

"Her Royal Highness The Duchess of Cambridge was safely delivered of a son at 4.24pm," Kensington Palace said in a statement just over four hours after she gave birth.

"The baby weighs 3.8kg. The Duke of Cambridge was present for the birth."

It was in the same hospital wing that the late Princess Diana gave birth to William in 1982.

'Wonderful baby'
Royal aides later placed a formal bulletin on a gold easel in the forecourt of Buckingham Palace which said that both Kate and her son were "doing well".

The queen (87) said she was "delighted" while Prince Charles said he was overjoyed.

British landmarks including the London Eye and BT Tower were lit in red white and blue to celebrate the baby's birth while cannon fire will ring out across the capital on Tuesday.

Newspapers splashed the arrival over their front pages, with many saying simply: "It's a boy."

The arrival of a royal baby and a new generation for the British monarchy had been hotly anticipated ever since the couple married in 2011 after a decade-long romance.

The popular couple have been widely credited with revitalising "The Firm", as the British royals are known, following decades of scandal and the death of Diana in a Paris car crash in 1997.

The palace said the boy's name would be revealed later, but he will be known as Prince of Cambridge.

Bookmakers say the favourites are George and James, traditional names for a future monarch.

William, also 31, has been on annual leave and will take two weeks' paternity leave from his job as a Royal Air Force search and rescue pilot.

Anticipation
The birth came later than widely expected, adding to the sense of anticipation – as well as the frustrations of hundreds of members of the international media who waited outside the hospital for three weeks.

Prince Charles said that he and his second wife Camilla were "overjoyed at the arrival of my first grandchild".

"It is an incredibly special moment for William and Catherine and we are so thrilled for them on the birth of their baby boy," the 64-year-old heir to the throne said in a statement.

"Grandparenthood is a unique moment in anyone's life, as countless kind people have told me in recent months, so I am enormously proud and happy to be a grandfather for the first time and we are eagerly looking forward to seeing the baby in the near future."

The fact that it is a boy averted the need to rush through new succession laws across the 16 Commonwealth realms, which would mean that a royal princess could no longer be overtaken by any future younger brothers.

Royal fanatics gathered in London could not hide their excitement.

"We think it's so exciting that there is a new third in line to the throne," said Janice, a visitor from Ohio in the United States.

"We came here on Thursday and were very hopeful we would be here for the exciting news, we don't have royalty, so to us this is very very exciting."

"It is an important moment in the life of our nation. A proud nation is celebrating with a very proud and happy couple tonight," Cameron said.

The Obamas said they wished William and Kate "all the happiness and blessings parenthood brings", adding: "The child enters the world at a time of promise and opportunity for our two nations."

Australia's Prime Minister Kevin Rudd called it "a happy day for our close friends in Britain and the Commonwealth."

"Prince William demonstrated deep compassion when he met with families in Victoria who had lost everything during the Black Saturday bushfires of February 2009," recalled Rudd.

The pregnancy was announced in December when Kate was admitted to hospital with severe morning sickness.

A pall fell over the proceedings when a nurse at the hospital committed suicide following a prank call by two Australian radio hosts pretending to be the queen and Prince Charles. – AFP