Heyneke Meyer’s choice goes back to the future 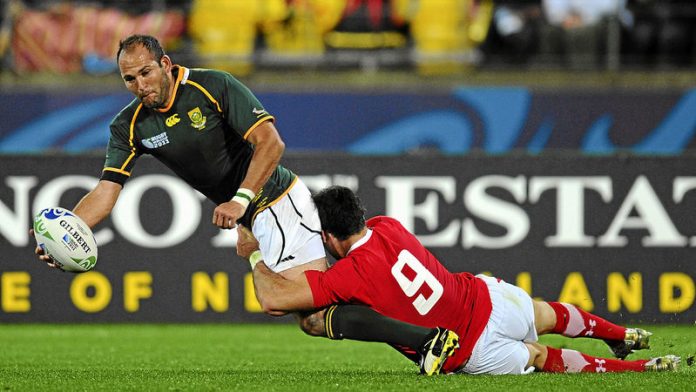 In the week that the All Blacks dropped the scrumhalf who helped to secure victory in the 2011 World Cup, the Springboks recalled the scrumhalf crucial to winning the trophy in 2007. Piri Weepu is 30 and, apparently, over the hill. Fourie du Preez is 31 and, according to Bok coach Heyneke Meyer, set to be his first choice in the position at the 2015 World Cup.

It's hard to be overly critical of Meyer, who has made no secret of his desire to lure Du Preez back to Test rugby ever since he took on the top job in South African rugby.

Du Preez was the playmaker in Meyer's Super Rugby-winning Bulls teams and, if Meyer had had his way, would have captained the Boks in June last year, when the coach's attempts to coax Victor Matfield out of retirement failed.

As it transpired, Du Preez got no further than a few training runs with the Bulls in 2012, but frenetic negotiations behind the scenes have secured his services for the three home games in this year's Rugby Championship – against Argentina in Soweto, Australia in Cape Town and New Zealand in Johannesburg.

It is a leap of faith. Between 2005 and 2009, Du Preez could lay claim to being the best scrumhalf in world rugby. His greatest weapon was a deadly accurate boot from the base of the ruck, something that allowed Springbok and Bulls teams to develop the hugely successful template of kick, chase and turnover rugby. Opponents who came to fear Du Preez's boot, however, also had to police his blind-side bursts that started many a try.

But wear and tear caught up with him and a shoulder injury that refused to heal slowed down the snappy service familiar in his prime. His last Test was the hugely disappointing quarterfinal against Australia in Wellington at the 2011 World Cup and, at the end of the tournament, he was one of half a dozen Boks to announce their international retirement.

Du Preez was lured to Tokyo by Suntory Sungoliath and took over from George Gregan as the Japanese team's marquee player. Former Wallaby coach Eddie Jones was in charge at the club when Du Preez arrived and has endorsed Meyer's decision to recall the scrumhalf.

The theory is that a far less onerous playing schedule and a lower level of competition have helped to restore Du Preez to health. It is not unpre-cedented in South African rugby, either. The great Os du Randt retired after the 1999 World Cup with a chronic knee injury. Three years on his farm in Theunissen helped him to recuperate, however, and he started playing again for Free State late in 2002. He almost made Rudolf Straeuli's team for the 2003 World Cup, but then became a key component of Jake White's champions in 2007, playing alongside Du Preez.

Nevertheless, questions are rightly being asked of Meyer, who clearly believes that there is a dearth of number nines in the country right now. It is significant, for instance, that, far from dipping his toe in the water with the selection of Du Preez, Meyer has jumped in at the deep end.

He said: "This is more a long-term vision. I want to see what Fourie can add and what he can bring to this side. By next year, he will probably be available for all the Test matches and specifically in the World Cup he will be available. I'm thankful he wants to play for South Africa."

So, unlike many of the coach's selections last year, which smacked of short-term desperation, he has in effect declared that, injury and form permitting, Du Preez is his man.

It is a sad indictment of what else is available at the moment. Jano Vermaak is in the squad, even though he is also heading overseas after being asked by the Bulls to take a pay cut.

Piet van Zyl has been signed from the Cheetahs by the Bulls as a direct consequence and he will join the Springbok squad when Du Preez is unavailable.

It appears that François Hougaard has lost his way and that Ruan Pienaar will continue as the first-choice scrumhalf for Meyer in games when Du Preez is not available. Pienaar has been a loyal servant who finally got to play his preferred position after years of being messed around between flyhalf and fullback. Pienaar joined Ulster in 2010 and his spring-heeled displays with the Sharks are a distant memory now. He plays a much more structured, northern-hemisphere style of game that is not guaranteed to bring the best out of the Springboks on firm surfaces.

Rugby being the game it is, the chances must be good that Meyer's long-term plans will be stymied, either by injury or by anno domini. If Du Preez makes it, no one will be surprised; that's how good he was.

However, two years out from the World Cup, it is far more likely that there is a young scrumhalf somewhere in the country who will step into the breach. And when that happens, it will be good to be able to call on the advice of the great Fourie du Preez.

Time running is out for Meyer’s men