Koster plenty: Is this SA’s most expensive road? 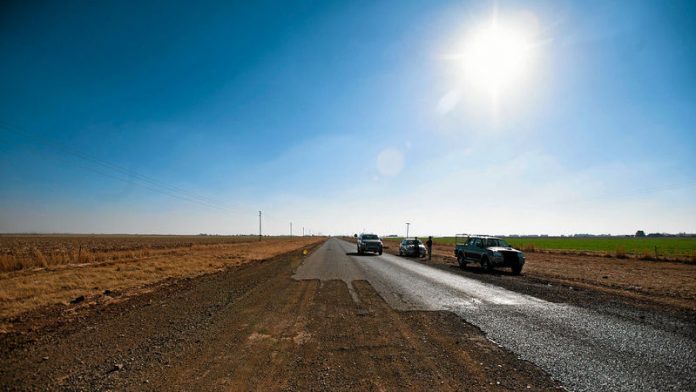 Just outside Lichtenburg, there is a big sign with a bold promise about the 50km road you are about to drive along to the neighbouring town, Koster.

The provincial department of public works put up the sign, which  promised that contractor Tau Pele Construction would complete the road in six months — it’s been about six months now.

This is an incomplete road to hell. And it is only paved with good intentions.

Over the past four years, which is how long the relentless construction has been taking place, there have been countless car accidents and some fatalities. Farming in the district has suffered — suppliers who transport the produce stopped servicing the area because of the bad road. Taxi passengers complained about reaching their destination too late because of traffic control points, known as “stop-and-go” points, and taxi owners spent too much money fixing their cars because of damage caused by the state of road.

No road signs
From the Lichtenburg exit all the way to Koster, the road does not have barrier lines, something both taxi owners and farmers say adds to the high number of road accidents. Much of the road is uneven and has a thick protruding line in the centre.

There are no road signs displaying the speed limit, nor are there warning signs when the tarred road comes to an end. Some motorists, including those with big trucks, avoid driving on the gravel part of the road and end up facing oncoming traffic so that they can stay on the single lane of new tar.

Pieces of tyres on the side of the road bear testimony to the many casualties this road has caused.

The road, by the way, was supposed to cost R208-million and was supposed to be completed in 2010. The deadline was extended to 2011, but it is still incomplete and has now cost at least R230-million, not including all the millions of rands in legal costs and maintenance costs.

As the legal disputes continue, the construction has come to a halt for the third time, and the local people are suffering.

She has also been struggling for the past three years to move between her farm and the small town. It took her an hour and a half to drive to town, she says. Two traffic controlling points on this 10km stretch were the reason for the delays, with each point leaving her waiting for about 20 minutes.

She owns three 4x4s, all of which have been damaged several times by sharp rocks on the road. The damage includes cracked windscreens, dents on the bonnet and the body, as well as broken headlights.

Visser says insurance companies no longer want to pay for her cars because she claims for damages so frequently. A windscreen lasts for two to three months before it’s damaged again, she says.

“I’ve got two [traffic] tickets for this windscreen,” she says, pointing to one of the cars. “And I’m not going to pay. I’ll go to court to fight this.”

Negative impact not only felt by businesses
Business at Visser’s guesthouse on the farm fell flat as people started avoiding the road. She also had to sell her second farm, which is 30km away, because “it was not worth driving the whole day to the farm”.

It is not only businesses that have been affected by the building. Visser’s family has for years been forced to leave home at 8am on a Sunday morning to make the 9.30am church service. A school bus to town can only make it on time if it leaves the farms at 5.30am for a 7.30am start.

Out of frustration, farmers last year threatened to block the road until the government listened to them, but they were threatened with arrest if they did so. They’re now working on forming an alliance with taxi owners, who are equally angry about the state of the road, to plan alternative action.

We had an impromptu meeting with taxi owners near the signboard with the empty promise. Jeffrey Phale, a taxi owner who is a member of the Lichtenburg taxi association, says that, despite some progress on the road, there are still many causes for concern.

Avoiding toll fees
Taxis belonging to this association transport passengers between Lichtenburg and Koster, Vryburg, Rustenburg and Pretoria. This road is their only option because they avoid the R71 tollgate in Swartruggens.

“This road is still in a bad state,” Phale says. “It’s difficult to use it because our cars get damaged.”

Until early last year, it was taking road users about four hours to drive between Lichtenburg and Rustenburg, according to another taxi owner, Kebalepile Lekawa. “You would go through four stop-and-go points,” he says. “If you left here at 10am you’d only get to Rustenburg at 2pm. Each stop-and-go took about 15 minutes.”

Accidents are more likely now because there are no stop-and-go points in place — the department has suspended the responsible contractor after a court order.

Court battles
Phale says that it was still difficult to avoid accidents even when the contractors had workers manning the stop-and-go points.

“Some drivers are impatient and, instead of waiting at the stop-and-go, they just drive through and cause accidents. We want the government to complete this road because it’s killing too many people,” he says.

There have been three contractors on the road in the past four years.

Tau Pele Construction has been stopped from doing its work, and anxiety is growing among residents that this will mean a further wait.

There was hope when Tau Pele got on site in February that the road would finally be completed, but two weeks ago the court ordered the company to stop working until the dispute lodged by losing bidder Roucomm Systems has been settled.

Even the part of the road that has been rehabilitated does not look good. The thin layer of tar is already coming off in some parts, revealing the gravel underneath. Towards the R53 T-junction to Ventersdorp and Swartruggens, the tar is not holding at all.

Farmers affected
For farmers, harvesting time is the most problematic because companies that transported their farm produce have stopped providing that service. They complain that they are losing money because of delays on the road and damage to their vehicles.

Rudolf Richter, a young farmer chosen to speak on behalf of a group of Grootpan farmers that we met at the Landmark farm store, says complaining to the government through the Transvaal Agricultural Union has not helped.

“This road is costing us money,” he says. “But it’s not all about our business, it’s about safety and lives first. Our children are on this road every day. It’s even more dangerous for people who don’t know the road.”

Richter says that disruption to the agricultural business also poses a threat to food security. The North West is one of the provinces that is heavily invested in agriculture, and farmers there produce mealies, wheat, beans and meat, among other things.

Less than 5km from our meeting point, the road is tarred only on one side. This is the part that farmers say Tau Pele dug up a few days before the company was told to leave the construction site. When one car drives on the gravel part of the road, the dust appears to impair visibility on the other side.

Farm workers walking 10km
Farmworkers are not spared. Hendrick Ditibane, one of Visser’s employees, says they are forced to walk 10km to town or rely on their employer to drive them to the shops.

If they want to spend unlimited time in Lichtenburg, their only choice is to walk because taxis stopped servicing the area when the roads that led to the farms collapsed.

Ditibane says he spends hours on the road, particularly when he walks with his wife and children to town. “We rest along the road and when it rains we’ve got no choice but to keep walking.”

Taxi association vice-chairperson Pholo Lerutle says the frustration was worsened by the suspension of work on the road for the third time.

“We are not happy that the contractor was stopped because he appeared to be working faster,” he says.

Hopes of seeing this road completed are getting thinner by the day.

“We suspect that three years from now we’ll be called to this same spot by someone else asking us the same questions you’re asking us,” Lerutle says.