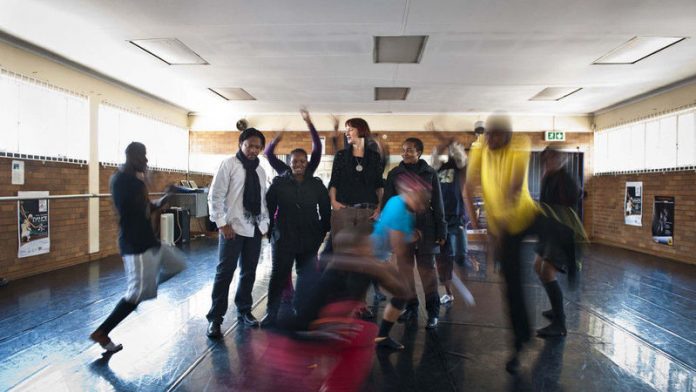 To celebrate its quarter century, the Dance Umbrella has adopted the payoff line, "Celebrating 25 years of dancing all over Johannesburg”.

The idea of extending the reach of dance into real spaces (and therefore real time) wasn’t new when choreographer Jay Pather took his piece called Cityscapes to five venues in the city in 2005. At the time, the concept of "site-specific"performance was all the rage. But it was new to local audiences. And I recall seeing denizens of the Jo’burg streets stunned in disbelief as black dancers, with their faces and bodies painted white, did some co-ordinated moves to intrude deliberately on the already fast-moving city pace.

Pather’s Cityscapes happened at Fordsburg’s Oriental Plaza, the Carlton Centre, Sandton Square, the Johannesburg Art Gallery and in a bedroom of the Devonshire Hotel in Braamfontein. The enormity of the challenge could not be underestimated. Yet, conceptually, and even though he may not have wanted it that way, he ended up simply "taking art to the people"instead of creating an artwork that would arise organically from the space it inhabited.

"A public space is rich with aesthetics or non-aesthetics,"Pather told me at the time. "There are points of tension quite different to what you get on a stage inside a theatre with cushioned seats. But it’s not just about taking theatre to the people, it’s about finding the complexities of everyday life inside the work,"Pather argued.

"It has been a way of making art that embraces the complexity of living in a South African city–with all the contradiction and grain that may not always sit well in the stomach.”

Years later on Main Street, outside the recently established gallery, Goethe on Main, in 2011, choreographer Sello Pesa and his Ntsoana Dance Company performed the work Inhabitant in the middle of a busy city road, at rush hour. In contrast to Pather’s, the work was almost rendered invisible, the dancers camouflaged by the city activity happening around them.

We in the audience were seated on the pavement and to average passersby, with our smart clothes, car keys and cellphones, we seemed to be the actors.

Meanwhile, apart from some madness, like a performer in a motorbike helmet banging his head against a factory wall, activity on the city street carried on.

The point of both anecdotes is to show how the Dance Umbrella has opened up opportunities for dancers to get out of their comfort zones and to explore their discipline beyond the sheltered theatre environment. The festival has made the real spaces possible and has brought audiences to places like the disused stock exchange building on Diagonal Street (for later works by Pesa and Pather) and the Johannesburg Art Gallery. Here, the super-famous Robyn Orlin ignited her Babysitting series in 2004.

The concept of performers and dancers taking audiences on a whirlwind tour of famous historical galleries has now been applied by Orlin at the Alte Nationalgalerie of Berlin, the Louvre museum in Paris and the Palais des Beaux-Arts of Lille.

Back in Johannesburg, Georgina Thompson has been the Dance Umbrella festival director for the past 19 years. Last week I met her and her staff at the Dance Space in Newtown, the studios that once belonged to Moving into Dance Mophatong before that company got its colourful new premises in 2009.

The Dance Space is the headquarters, including the dance studios, of two organisations: The Dance Forum that doles out residences to choreographers for single works and that organises the Dance Umbrella; and choreographer Gregory Maqoma’s Vuyani Dance Theatre.

With the adjoining Dance Factory and the studios of Moving into Dance, this is Jo’burg’s dance mecca, a small patch of land that is mythical in the cartography of African dance.

There, in a rather confined space, with desks lined up in one office, Thompson works the festival with Thatanelo David April and Lindiwe Lekasapa. Technicians and production staff come and go, including production manager Mashudu Nemukula and technical head Gladman Balintulo.

In the midst of organised chaos, Thompson and team meet and greet famous international choreographers and dance companies, they recruit audiences for works, hold special events like opening nights and galas and they baby-sit the media at the shows during the two-week festival.

Looking back at her two decades at the helm of the Dance Umbrella, Thompson says the highlights have been twofold: Steven Cohen and Robyn Orlin.

"When Steven started creating work on the Dance Umbrella, he blew my mind,"Thompson said. "I’d heard about Steven and I had seen his exhibitions, but I didn’t realise that he had this other side to him, of creating a performance artwork.

Thompson’s second high point came when she provided the launch pad for Orlin’s world-famous show Daddy I’ve seen this piece six times before and I still don’t know why they’re hurting each other: "The first time she presented it was in 1999, in the Wits University Downstairs Theatre and I was standing upstairs, in the lighting box. And I remember thinking to myself that this work is going to go places–I just knew it.”

In 2003, Orlin was awarded the British Theatre’s Laurence Olivier Award for Outstanding Achievement in Dance for her choreography of the same piece.

"It’s been an evolution to watch,"Thompson said. "The first Dance Umbrella I saw was just pure dance, nothing else, everybody was dancing. Whether it was tap dance, Spanish dance, ballet, contemporary, hip-hop, pantsula or traditional, it was all dance, dance, dance, dance.

"Robyn [Orlin] played quite a big role in shifting people. Because she went to America for three or four years and then she came back in a whole new installation work mode.

"And then you started seeing people copying it. Vincent [Mantsoe] was trendy at one point and everybody ‘did’ Vincent Mantsoe: Afro-fusion, mysticism, waving your arms like a bird.

"And now live music is beginning to come in. Gregory [Maqoma], for instance, has been working a lot overseas and he has seen that people work with original composition and musicians. So he has started doing the same thing here and I think it’s a good thing because there’s a huge gap. People aren’t working with composers in the dance industry. They’re using recorded and using hit music.”

Last year the Dance Umbrella became part of the Arts Alive festival, giving it three years of stability, of being part of the city’s major annual cultural platform. Then in April Thompson signed a new partnership agreement with the Gauteng department of sports, arts, culture and recreation.

"It is very exciting. They’re giving us very nice money–it is the first time ever. Hopefully this is the beginning of a lasting partnership with Gauteng.”

Although she laments that Jo’burg audiences are uninquisitive and more interested in local than international work, Thompson is content that she has seen the dance industry integrate itself racially, where it was once compartmentalised.

For April and Thompson, the next positive step will come when the Soweto audience, for example, clustered around the Soweto Theatre in Jabulani, begins to demand for a more diversified arts programme.

For now, though, they are hoping that the festival, which starts today, will be alluring to the culturally complex city audience.

The Dance Umbrella takes place at the Dance Factory, the Market Theatre and Wits Theatre from August 31 to September 14. For programme details, visit danceforumsa.co.za