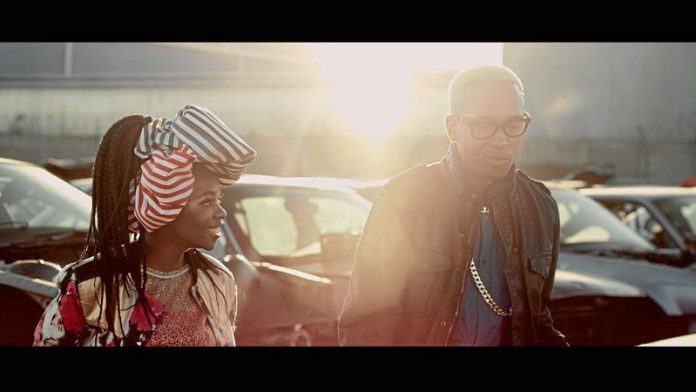 With the song titled Awufuni –or You Should Have Called (My Heart) – Mathambo has collaborated on what might be deemed a mainstream video.

The move is a departure for the artist, who is known for remarkable musical feats, such as his collaboration with South African photographer Pieter Hugo in 2011.

For the remake of Joy Division's She's Lost Control (retitled Control), Mathambo was pictured in a white suit, with a megaphone, strolling through a cemetery.

Elsewhere, ghoulish kids seemed to be having fits in a squatter camp; there was water torture and a disused city building caught fire. Meanwhile, cool as ever, the Elvis-like Mathambo droned on, lamenting in time to a house beat.

Yes, mainstream is probably the last thing Mathambo would ever be accused of. His name is always pre-faced with the word "futuristic".

Now, with his latest video he has taken it upon himself to celebrate "the modern and futuristic woman".

"I wanted to celebrate exciting modern women  – the strength of it, the fun of it, the flavour of it," says Mathambo about the track that is featured on his recent mix tape, Escape from '85.

The song is his take on a track of the same name by an old-school South African girl group from the 1960s, Izintombi Zesi Manje Manje.

The video, directed by Becatti of the company Picture Tree, is a different type of slick that is rarely seen in Mathambo's music videos, which range from the DIYesque feel for the track Mshini Wami with its crude video special effects, set on the streets of Yeoville, to the very dark imagery of Control.

Becatti sums up the concept: "A group of five girls form a futuristic gang, in a surreal way."

"It was really exciting to work with Spoek," Becatti says. "He is really forward-thinking in all that he does and this is the modern and futuristic perspective of strong women through Spoek's eyes."

The video was commissioned by the United Kingdom's Vice magazine for a partnership campaign by Diesel+Edun. Edun is a clothing label founded by Ali Hewson, the wife of U2 frontman Bono.

Hewson has worked with Diesel on a two-season clothing collection. This included a 35-piece denim collection manufactured in Africa with Cotton Council International-approved cotton from Uganda.

The video is part of the second season of Diesel+Edun's Studio Africa.

"There's a main storyline where Spoek is on a date with this girl and she leads him into this scrapyard. He tries to escape but she chases him and the girls tie him up and perform this ritualistic dance around him," says Becatti.

The scrapyard, in the south of Johannesburg, is "run" by some old Ethiopians. It gives the video just enough edge to not discredit Mathambo completely.

Becatti says he had to rein in the edginess and darkness because of the brand associated with it.

"We wanted the girls to be full of colour and life and the scrapyard made them pop," says Becatti.

Becatti hopes that the video will open up more opportunities for directors to work with brands and to make brands pay attention to the potential of the local music video industry.

"I hope more music videos happen in this country. I think music videos are undervalued. Hopefully there will be more to come," Becatti says.