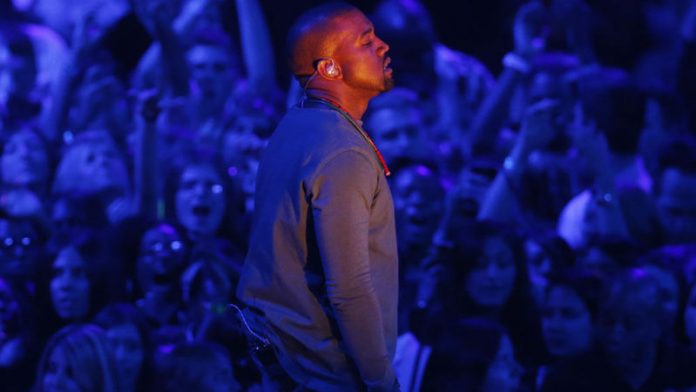 News of West's appearance emerged via Twitter and Instagram postings by several of the party's guests. One attendee, a professional photographer, shared an image from the show. The pixelated footage shows the rapper performing to an ambivalent crowd: people scarcely seem to be paying attention; when they are, they are posing for photographs.

According to Kazakh website Tengrinews (via Buzzfeed), the party celebrated the nuptials of Aysultan Nazarbayev and Alima Boranbayeva. Aysultan (23) is the youngest son of President Nazarbayev's eldest daughter. He is a graduate of Royal Military Academy Sandhurst, and now works for the country's ministry of defence. Boranbayeva (20) reportedly attends London's Courtauld Institute of Art. Her father is Kayrat Boranbayev, chairperson of the joint Kazakh-Russian state oil venture KazRosGas.

Celebrity blog TMZ claimed West received $3-million to appear at the royal wedding reception, offering up songs such as Can't Tell Me Nothing. Before the bash, Tengrinews reported that other performers might include the Turkish singer Mustafa Sandal, Ukrainian pop star Elka, actors Gennady Khazanov and Nonna Grishaeva, and even, "according to some sources", Beyoncé Knowles. Alas for the happy couple: there is no indication that the Crazy in Love singer followed West to Astana.

Earlier this summer, David Cameron became the first British prime minister to pay an official visit to Kazakhstan, meeting with the president. Human rights activists called on Cameron to speak out against abuses in the former Soviet republic; according to David Mepham, director of Human Rights Watch, Kazakhstan's "serious and deteriorating human rights situation" includes "credible allegations of torture, the imprisonment of government critics, tight controls over the media and freedom of expression and association, limits in religious freedom, and continuing violation of workers' rights".

In 2011, Sting publicly rejected an invitation to perform at the Kazakh government's official Astana Day festival, citing Nazarbayev's "repression and crackdown" against striking oil and gas workers. "The Kazakh gas and oil workers and their families need our support and the spotlight of the international media on their situation in the hope of bringing about positive change," the singer wrote. – © Guardian News and Media 2013