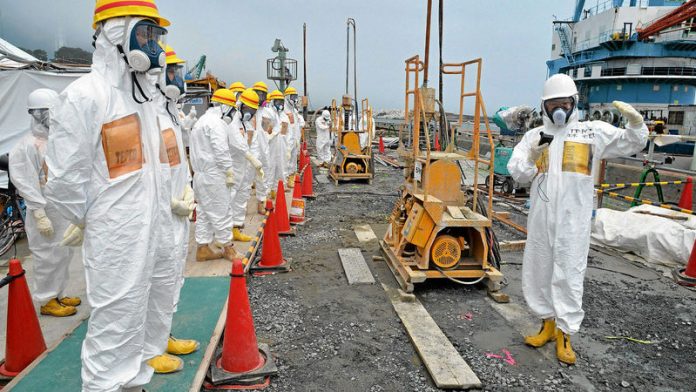 The measures, announced this week, come as the plant's operator, Tokyo Electric Power (Tepco), ­struggles to prevent leaks into the Pacific Ocean and to find a way to ­contain and treat the huge volume of water that has accumulated at the site since it was hit by a tsunami in March 2011.

The decision is widely seen as a safety appeal just days before the International Olympic Committee  (IOC) chooses which city will host the 2020 Olympics. Tokyo, Istanbul and Madrid are on the shortlist.

Prime Minister Shinzo Abe said the government would take a more active role in the biggest nuclear clean-up in history, amid mounting concern that Tepco is no longer able to cope alone.

"The world is watching to see if we can carry out the decommissioning of the Fukushima nuclear power plant, including addressing the contaminated water issues," Abe reportedly told Cabinet ministers.

Reports said that about 32-billion yen (about R3.3-billion) of the 47-billion yen in funding would be spent on constructing a 1.4km-long underground frozen wall around four damaged reactors ­– an untested and expensive technique.

The wall would prevent ground­water from mixing with coolant water, which becomes contaminated after it comes into contact with melted nuclear fuel.

Another 15-billion yen will be spent on improving technology to remove all radioactive particles, except tritium, from the water, or to at least reduce them to acceptable levels.

The head of Japan's nuclear watchdog, Shunichi Tanaka, confirmed on Monday that discharging treated water into the ocean is one option that is being considered.

Given the large volumes involved, experts say that Tepco will soon run out of storage space and will have no choice but to discharge or evaporate the contaminated water.

Last month, Tepco belatedly confirmed reports that coolant water was mixing with groundwater and flowing into the sea at a rate of about 272 tonnes a day.

In a separate incident, the utility, which was in effect nationalised last year when it was saved from ­collapse with a  one trillion yen injection of public funds, said a ­storage tank had sprung a serious leak. Smaller amounts of tainted water are thought to have breached other tanks and pipes.

Last weekend, workers recorded radiation levels of up to 1800 milli­sieverts an hour near one tank. A radiation dose of that size is big enough to kill an unprotected person nearby in about four hours.

Tepco said the radiation was emitted in the form of beta rays, which travel only short distances and can be easily shut out, and that workers had not been put at risk.

Concern is growing that the water crisis could harm Tokyo's chances of being chosen ahead of Madrid and Istanbul to host the Olympics.

But Japanese Olympic officials said the Fukushima crisis should not affect Tokyo's prospects.

"There is no risk from Fukushima," Tsunekazu Takeda, who is leading the city's bid, said. "Day-to-day life in Tokyo carries on as normal for its 35-million people.

"The air and water quality is safe. Also, the data shows that the radiation level is the same as most cities, including Paris, London and New York. Our main focus is to deliver a great and safe Games."

Abe will deliver Japan's final pitch to the IOC ahead of the decision in Buenos Aires on Saturday evening.

The emergency measures announced on Tuesday do not address the wider problem created by the constant need to cool the damaged reactors and the resulting build-up of contaminated water.

In addition, the new funding represents only a tiny portion of the tens of billions of dollars experts estimate it will cost to decommission the plant, an operation that is likely to last at least 40 years.

No decision has been made over whether the state or Tepco will foot the bill.

"This is a matter of public safety, so the country has to take the lead on this issue and respond as quickly as possible. Figuring out who to bill for the costs can come later," Akira Amari, the economics minister, said.

Public criticism of Tepco has intensified in recent months. It initially denied reports of groundwater leaks, and was found to have employed just two workers to conduct twice-daily inspections of more than 1000 ­storage tanks containing an estimated 300 000 tonnes of contaminated water.

To compound Tepco's problems, sources familiar with the situation at the plant say the firm is struggling to hire new workers, as others resign or are forced to leave because they have reached their radiation exposure threshold.

Critics of the nuclear industry, even inside the governing Liberal Democratic Party, are beginning to ask why no Tepco executives have been held accountable for the latest string of accidents.

"Is anyone at Tepco taking responsibility for these mistakes?" Taro Kono, a Liberal Democratic Party deputy secretary general, was quoted as saying. "I haven't heard of anyone stepping down or being fired. Tepco needs to go down and the government needs to take over."