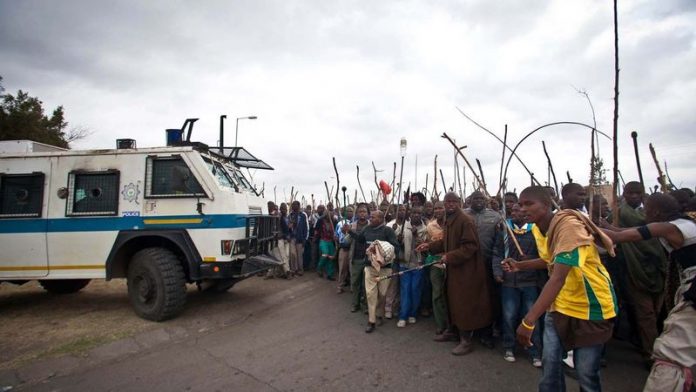 People marching to the Union Buildings on Thursday to push for state funding for the counsel of miners wounded and arrested at Marikana hoped to make a "statement" through their protest, the convenor said on Thursday.

"We are hoping to make a statement to government that workers have the capacity to fight political leaders to get their way," said Bishop Joe Seoka.

Marchers were still trickling into the Caledonian Stadium in Pretoria by 11am on Thursday, ahead of the march organised by Citizens4Marikana.

The group said it regretted the ruling on Monday that the Farlam commission of inquiry would continue hearings in the absence of representatives of the wounded and arrested miners.

The commission is probing the circumstances surrounding the deaths of 44 people in strike-related unrest near Lonmin's platinum mine at Marikana, North West, in August last year.

Postponed commission
Commission chairperson, retired judge Ian Farlam, ruled that it would not be prejudicial to the miners wounded and arrested at Marikana last year to continue the hearings.

Dali Mpofu, who is acting for the wounded and arrested miners, applied for a postponement of the commission while he continued to seek funding.

He recently provisionally withdrew from the commission's hearings after failing to get state funding for himself and his team.

Police shot dead 34 people, almost all striking mine workers, while trying to disperse a group gathered on a hill near the mine on August 16 2012. Ten people, including two police officers and two security guards, died in the preceding week.

Among the marchers gathered on Thursday was Inkatha Freedom Party leader Mangosuthu Buthelezi.

He said what was happening was an injustice but would not say whether the IFP would make a donation.

"I don't want to make empty promises, because everyone is looking for funds for next year's elections. If we have people with money and who can pledge support, we will welcome it," he said.

Dipping into state funds
Opposition to Urban Tolling Alliance (Outa) chairperson Wayne Duvenage was also at the stadium to march.

"[The police] are forcing people to be on the back foot while they dip into [state funds] to pay for their case," he said.

"It is similar to the Outa case, but this is stronger because the government called the commission, but they don't want to level the playing fields," he said.

Duvenage added that if government could not fund both sides, then funding should be terminated for all.

Citizens4Marikana instructed its lawyers to secure permission for the Union Buildings march so it could appeal directly to President Jacob Zuma for legal funding in its quest to get to the truth about what happened at Marikana, spokesperson Erik de Ridder said on Monday.

"The absence of the voices of the victims calls into question the ability of the commission to reach a fair and balanced outcome," the group's spokesperson Erik de Ridder said.

'Legal rights'
Citizens4 Marikana began as a loose group of concerned individuals, who came together a few days before the first commemoration of the August 16 massacre.

"Right now, Citizens4Marikana is a conduit for the Marikana Dignity Trust," said de Ridder, a youth activist with an academic background in engineering. "The Marikana Dignity Trust will raise funds for the victims and families of victims of the Marikana Massacre of August 2012; to fund the pursuit of their constitutional and legal rights and for the further welfare and benefit of the beneficiaries."

The organisation says it has been "embraced" by the legal team of the miners and the victims. It has also been placed on record at the Farlam commission.

Others in the organisation include media strategist Kay Sexwale and photojournalist Greg Marinovich.

The group has also rapidly become popular with opposition parties.

As the group prepared to march to the Union Buildings on Thursday morning they were joined by Julius Malema's Economic Freedom Fighters (EFF) and the Democratic Alliance.

The Constitutional Court dismissed an application for leave to appeal for state funding by lawyers representing the 259 arrested and injured Marikana miners at the commission.

Costs
The protracted inquiry has seen costs run into tens of millions of rands, and the state and Lonmin appear to have deep enough pockets to keep on funding top-notch lawyers. But the miners' lawyers in the form of Mpofu's team has run out of funds and explored nearly every avenue – from applying to Legal Aid South Africa to requesting both the high and Constitutional courts to compel the government to foot the bill – with no success.

At the moment, the commission is continuing without representation for the injured and arrested mineworkers. Representatives of the families of the deceased and the Association of Mineworkers and Construction Union (Amcu) have also withdrawn in solidarity. At present, any witness called to testify is done on the basis of a detailed written statement and short oral evidence.

At a Rustenburg ceremony marking the anniversary of the Marikana massacre on August 16, miners passed around a bucket for contributions towards their legal fees, according to Mpofu. The money was mostly in coins and came to a total of R17 201.

The Association of Mineworkers and Construction Union president Joseph Mathunjwa was scathing of government's decision not to provide funding for the arrested and injured miners – several of whom have alleged torture by police during their detention – and questioned its motives to obfuscate the truth in doing so: "Clearly government finds itself guilty which is why it wants a half-baked truth to come out of the commission."

PODCAST: How members of the ANC were pivotal to the conceptualisation of the EFF