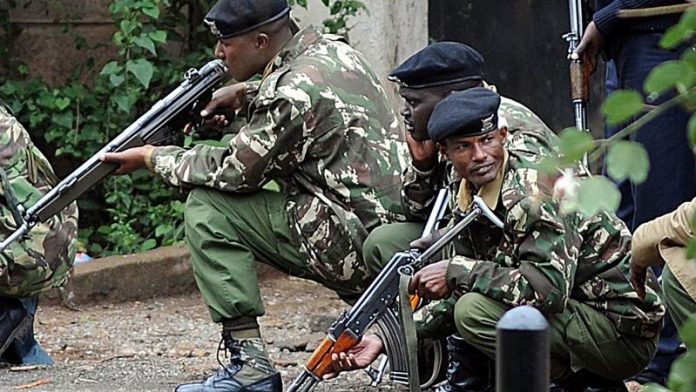 Islamic militants who staged a deadly attack on a mall in Nairobi said on Tuesday that hostages are alive and their fighters are "still holding their ground", contradicting Kenyan officials' claims that they are in a final push.

Explosions rang from the mall in the morning and at midday, and gunfire could also be heard, despite the Kenyan government's assurances of success. Fresh smoke was seen rising from the upscale Westgate mall in Nairobi.

As the crisis continued, Nairobi's city morgue braced for the arrival of a large number of bodies of people killed, an official said.

Earlier, the Kenyan Red Cross confirmed at least 62 people had been killed, but spokesperson Abbas Gullet said it was still not known how many more may be dead inside the building.

"It is certainly known that there are more casualties," he said.

On the fourth day of fighting at the mall, three Kenyan soldiers died and eight others were receiving treatment, the Kenyan interior ministry said on Tuesday.

'We are finished'
A soldier emerging from the mall said that "we are finished", but then conceded that government forces were still trying to secure the entire interior.

He said troops were checking for explosives, and to see if they could find any survivors in certain areas including the mall's movie theater and casino. He spoke on condition of anonymity because he said he was under orders not to speak to media.

"There are countless number of dead bodies still scattered inside the mall, and the mujahideen are still holding their ground," said the Somali rebel group al-Shabab in a Twitter message considered to be genuine.

It added that the hostages are "still alive looking quite disconcerted but, nevertheless, alive".

But Kenyan police urged people to ignore "enemy … propaganda" and assured that the defense forces were continuing to "neutralise" the terrorist threat.

"Troops now in mop up operations in the building," the police said on Twitter.

'Remove your forces'
A US embassy vehicle, identifiable by its numbered diplomatic license plate, arrived at the morgue on Tuesday. American officials have not confirmed the deaths of any US citizens in the mall attack, but it appeared possible the Americans who visited the morgue – likely security officials with an agency like the FBI – could have been seeking information about one of the bodies inside.

Al-Shabab, whose name means "the youth" in Arabic, said the mall attack was in retribution for Kenyan forces' 2011 push into neighbouring Somalia. African Union forces pushed the al-Qaeda-affiliated group out of Somalia's capital in 2011.

"You could have avoided all this and lived your lives with relative safety," the group Tweeted on Tuesday. "Remove your forces from our country and peace will come."

While the government announced on Sunday that "most" hostages had been released, a security expert with contacts inside the mall said at least 10 were still being held by a band of attackers described as "a multinational collection from all over the world."

Kenyan Foreign Minister Amina Mohamed said "two or three Americans" and "one Brit" were among those who attacked the mall.

She said in an interview with the PBS NewsHour programme that the Americans were 18 to 19 years old, of Somali or Arab origin and lived "in Minnesota and one other place" in the US. The attacker from Britain was a woman who has "done this many times before", Mohamed said.

US officials said they were looking into whether any Americans were involved. State department spokesperson Jen Psaki said on Monday that the department had "no definitive evidence of the nationalities or the identities" of the attackers.

'Baseless rumours'
Britain's foreign office said it was aware of the foreign minister's remarks, but would not confirm if a British woman was involved.

But al-Shabab, responding to a request from AP, denied that any women had attacked the mall.

"We have an adequate number of young men who fully committed and ready to sacrifice their lives for the sake of Allah and for the sake of their religion, so there is no need for us to employ our sisters in the battlefield and thereby expose them to unnecessary risk. So these are just baseless rumours that have no substance," said the al-Shabab press office in what is thought to be an authentic email address.

Three attackers were killed in the fighting on Monday, Kenyan authorities said, and more than 10 suspects arrested.

Al-Shabab spokesperson Sheik Ali Mohamud Rage said in an audio recording posted on a militant website that the attackers had been ordered to "take punitive action against the hostages" if force was used to try to rescue them.

A Western security official in Nairobi, who insisted on not being named to share information about the rescue operation, said the only reason the siege hadn't yet ended would be because hostages were still inside.

Westgate mall, a vast complex with multiple banks that have secure vaults and bulletproof glass partitions, as well as a casino, is difficult to completely secure, the official said. "They are not made for storming," he said of the labyrinth of shops, restaurants and offices. "They're made to be unstormable."

Wealthy Kenyans
The attack began on Saturday when some 12 to 15 al-Shabab militants invaded the mall, wielding grenades and firing on civilians inside the complex, which includes shops for Nike, Adidas and Bose and is popular with foreigners and wealthy Kenyans.

The militants specifically targeted non-Muslims, and at least 18 foreigners were among the dead, including six Britons, as well as citizens from France, Canada, the Netherlands, Australia, Peru, India, Ghana, South Africa and China. Nearly 200 people were wounded, including five Americans.

The attack at the Westgate mall in Nairobi's Westlands neighbourhood was the deadliest terrorist attack in Kenya since the 1998 al-Qaeda truck bombing of the US embassy in Nairobi, which killed more than 200 people. – Sapa-AP