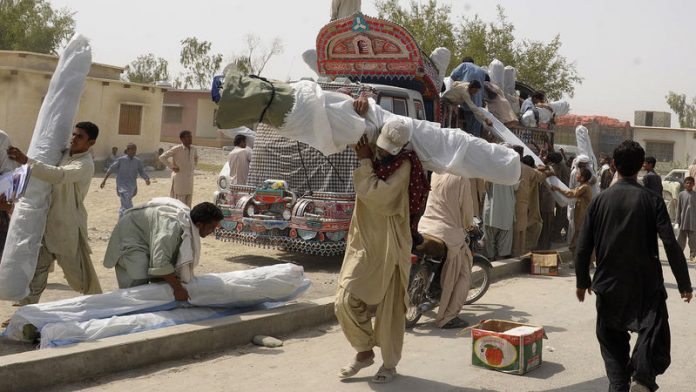 A powerful 6.8-magnitude earthquake hit southwest Pakistan Saturday, in a region already devastated by a tremor which left more than 300 people dead and 100 000 homeless less than a week ago.

The new quake struck the remote district of Awaran, at a depth of 14kmat 12:34pm (0734 GMT) according to the US Geological Survey.

"It was not an aftershock, it was an independent earthquake," Zahid Rafi, director of the National Seismic Centre of Pakistan, told Geo TV.

Awaran, the poorest district in the southwest province of Baluchistan, was shattered by a 7.7-magnitude quake on Tuesday which left 359 dead and more than 100 000 people homeless.

Relief efforts there have been thwarted by insurgent attacks on rescue convoys, with local officials admitting that teams have been unable to reach thousands of survivors in the worst-hit areas.

An AFP reporter in Awaran said Saturday that hundreds of patients being treated in the aftermath of the previous quake fled a hospital in panic as the new tremor hit.

Deputy Commissioner of Awaran, Abdul Rasheed Baloch told Geo TV that quake destroyed hundreds of mud houses in the Mashkey area, saying that "a lot of people have been trapped under the rubble".

"The telephone system has been damaged and we are not able to talk to someone and find out the exact information about the losses… But we have reports of severe losses in that area," Baloch said.

Rescue efforts in Mashkey, where the epicentre of the first quake was located, had already been complicated by insurgent groups in the area who have launched attacks on relief convoys, with local officials saying some 30 000 survivors are still waiting for aid.

The area is a stronghold of Baluch separatist rebels waging a decade-long insurgency against the Pakistani state.

The situation has forced officials to abandon efforts to reach survivors directly, saying instead they will work through village committees and private NGOs.

Abdul Malik, provincial chief minister of Baluchistan, told AFP that food and other rescue items would be distributed through local villagers.

Humanitarian tragedy
He appealed to the local separatist groups to allow rescue officials to reach the survivors.

"It is a humanitarian tragedy and I appeal them to allow rescue workers to help the survivors," Malik said on Friday.

Manan Baloch, a leader of the Baluchistan National Movement, allied to the Baluchistan Liberation Front, told AFP that his group will only allow private NGOs and local officials to help survivors.

"We will not allow army or FC (paramilitary Frontier Corps) here, only NGOs or local officials are allowed to come here," he said.

A Pakistan army officer in Awaran told AFP the military only wanted to help locals.

"They are not ready to accept us," he said on condition of anonymity.

A reporter in Awaran on Saturday said aid workers along with trucks loaded with food, clothes and, medicine were seen moving towards Mashkey.

On Thursday, a helicopter carrying the head of the NDMA came under rocket fire by insurgents while flying in Awaran district. No-one was hurt and no damage was done.

On Friday, insurgents opened fire on another helicopter and, in two separate incidents, fired on rescue convoys, officials said, adding that no one was hurt in the attacks. – Sapa-AFP