Transforming into an aerotropolis 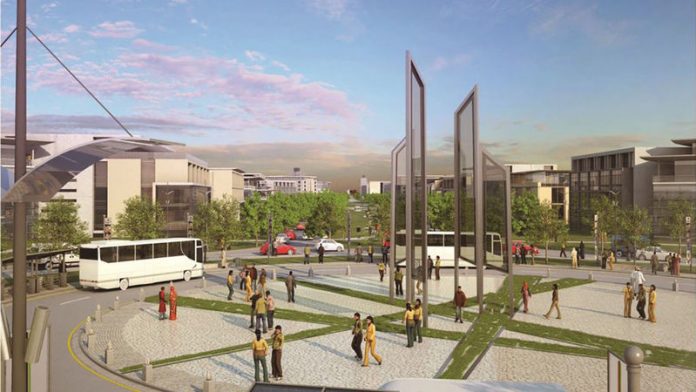 Located along the N8 road towards the Mangaung towns of Botshabelo and Thaba Nchu, the aerotropolis will boast services ranging from a shopping mall, educational and civic sites and an urban square to an international conference centre, hotels, and mixed housing.

"Like many in the country, the Mangaung Metropolitan area still has an undesirable apartheid footprint. The central business district is in Bloemfontein while to the east of the city the towns of Botshabelo and Thaba Nchu (which were labour dormitories historically) are almost 70km away. This sees the government spending R200-million a year on bus subsidies for citizens alone," says Kaba Kabagambe, the head of department for planning at Mangaung Municipality.

When executive mayor Thabo Manyoni took office in 2011, he ensured that the node forms part of the spatial development framework of Mangaung to reposition the city economically and financially.

"The airport node will basically anchor this economic development, but we are aware that a project of this scale does not happen overnight."

Phasing off
The node will be developed on 2 000 hectares of strategically located vacant or underdeveloped identified land.

The first phase, which is 700 hectares, is about the size of the entire central business district of Bloemfontein.

The site servicing phase of the project, which is currently underway, is envisaged to create 11 000 jobs. When fully developed, this phase will have an investment value of about R100-billion.

"This phase will include a number of major developments, such as a 50 hectare urban square, the international conference centre and related amenities such as hotels, business centres and niche shopping facilities.

"We are excited about this project because we believe that Mangaung is central in the footprint of the country and sitting at the crossroads of major movement routes on the national highways as well as rail transport converging in the metro," says Kabagambe.

It will also boast the first solar farm in Mangaung.

To bring these ideas into action, a partnership between the city, academic institutions and relevant professionals will ensure that the buildings to be constructed are environmentally friendly.

Besides being an economic hub for residents and visitors, there will be strides to ensure the new town promotes a healthy lifestyle by making it pedestrian friendly.

"The political leadership of this metro is going to be hands on in the planning phase. We want an environ-ment where people can walk and work and an environment that will be able to promote a healthy lifestyle," says councillor Manyoni.

The second phase of the project sees the node evolving into a dry port that will be a central area where all the modes of transport converge for the development of the area.

"This strategy is about facilitating industrial and large commercial development, such as promoting a variety of sectors within the economy.

"For example, in this hub, you can bring your produce and have it processed for consumption elsewhere in the country or the world. This will help redefine the economy of the province and the country," says Kabagambe.