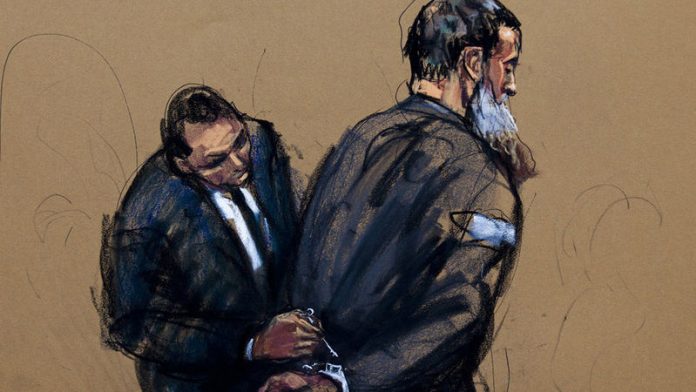 An alleged senior al-Qaeda figure pleaded not guilty in a New York federal court on Tuesday to the involvement in the 1998 bombing of the US Embassy in Kenya, which killed more than 200 people.

Judge Lewis Kaplan ordered Nazih al-Ragye – better known as Abu Anas al-Liby – to be detained without bail as a flight risk, saying: "There are no conditions under which he could be released and ensure the safety of the community."

Al-Liby's court appearance comes 10 days after a US Army Delta Force squad captured him in Tripoli and sent him to a US Navy ship in the Mediterranean Sea for interrogation. He was brought to the United States during the weekend when his health began deteriorating.

Al-Liby walked slowly into the federal courtroom in New York. His hands were cuffed behind his back and he wore loose gray sweat pants, a black sweatshirt and beige socks with black flip-flop sandals.

Al-Liby faces several charges, including conspiring to kill US nationals after an attack on a US embassy in Tanzania, which happened on the same day of the Nairobi mall attacks.

The courtroom was packed with reporters and law enforcement officials, including US Attorney Preet Bharara, who declined to comment after the hearing.

He stopped eating, drinking
Al-Liby (49) spoke briefly during the hearing, saying through an interpreter that he understood the proceedings and could not afford a lawyer. A green Koran was on the table in front of him.

After his capture, Al-Liby was taken to a US Navy ship for interrogation. Agents abandoned his interrogation after his health deteriorated and he stopped eating and drinking, a US official said. His wife has said in media interviews that he suffers from hepatitis C.

Kaplan said during the hearing that he signed a medical order for al-Liby but he did not elaborate. David Patton, a federal defender representing al-Liby for the hearing, declined to comment to reporters on al-Liby's health after the hearing.

Al-Liby was observed around 1993 taking pictures of buildings near the American embassy in Nairobi, Kenya. He later brought the pictures to a militant who eventually became a US government informant and witness, according to testimony given at the trial of embassy bombing conspirators in 2001.

He also discussed a possible attack on the US embassy in Nairobi with other al-Qaeda members, according to an indictment.

Computer expert
An early recruit to what became al-Qaeda's core organisation, court records show al-Liby attended alsQaeda training in the early 1990s in camps and safe houses along the Afghanistan-Pakistan border and was alleged to have become one of the top computer experts and trainers for the group.

In 1993, after Osama bin Laden and much of his entourage had moved to East Africa, al-Liby was one of a group of security and communications operatives who worked under the command of Ali Mohammed. Mohammed was a former Egyptian Army soldier who later became a trainer for US Special Forces and, later still, played a similar role for al-Qaeda, at one point allegedly acting as a double agent for both the Americans and the militants.

Patton said in a prepared statement after the hearing that "the presumption of innocence is not a small technicality here".

Al-Liby, Patton said, is mentioned "in a mere three paragraphs" of a 150-page indictment "relating to conduct in 1993 and 1994 and nothing since".

"There is no allegation that he had any connection to al-Qaeda after 1994, and he is eager to move forward with the legal process in this case," Patton said.

Kaplan set a date of October 22 to appoint a permanent defence lawyer to represent al-Liby.

Bharara, the Manhattan US attorney, declined to comment after the hearing. – Reuters

Kenya said it invaded Somalia to protect its citizens, but the attack in Nairobi this week shows this has failed
Read more
Advertising
Continue to the category
Politics