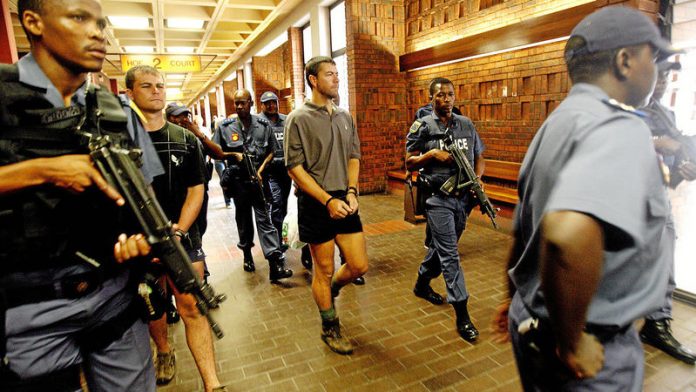 Judge Eben Jordaan said on Wednesday he would start delivering the sentencing of 20 Boeremag members on Monday and would end on Tuesday.

Senior prosecutor Paul Fick argued last month that the accused had planned a coup for "selfish political reasons" and wanted to enforce their views on South Africa's population through violence.

He said they had planned a violent takeover, which would have involved annihilating or driving millions of people out of the country.

The state asked the court to sentence the Boeremag bomb squad and three of its leaders to life imprisonment for their crimes.

Herman van Rooyen, Rudi Gouws and brothers Johan, Kobus and Wilhelm Pretorius had acted as the bomb squad, blowing up numerous targets and attempting to kill former president Nelson Mandela with a homemade bomb to create chaos in the country.

Dragging out the trial
A Soweto woman, Claudia Mokone, was killed by a piece of steel dislodged by a Boeremag bomb.

The state wanted the bomb squad, Pretorius family patriarch Dr Lets Pretorius and Boeremag leaders Tom Vorster and Dirk Hanekom to spend at least the next 25 years of their lives behind bars.

Fick argued that the rest of the accused, except the ailing Fritz Naude, should be sent to prison for periods ranging from five to 15 years.

Many of the Boeremag accused have already spent over a decade in prison, but Jordaan found that they were solely responsible for dragging out the trial.

Hercules Booysen, for Johan and Wilhelm Pretorius, argued that the accused had subjectively believed they were the victims of discriminatory legislation by a racist government and that they were involved in an armed struggle.

He said it was a state's duty to treat minorities with respect and to regard their grievances with sympathy.

Fifth class citizens
The present political dispensation in the country was doing the opposite, which created a feeling of oppression and resulted in deeds the court deemed as high treason, he said.

Booysen argued that none of the accused were ordinary criminals.

They ranged from farmers to highly qualified engineers, theologians, medical doctors, academics and military officers with no history of violence.

The government could have avoided the attempted rebellion if it had not degraded the Afrikaner male to "fifth class citizens", he submitted.

No normal person would leave a thriving medical practice or stop his studies to start committing violent crimes for no personal benefit without good, subjective reasons.

"High treason is a political crime par excellence. Remove the circumstances and the crime disappears," he said.

He argued that the state could have stopped the conspiracy much earlier and should be held equally responsible for the damage to state property, because police informers were instrumental in supplying the recipe for explosives to the accused. – Sapa