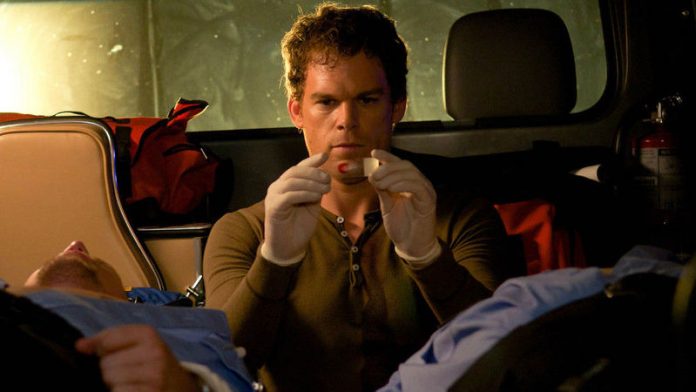 Can anything good come from writing about the final season of Dexter? After three years of declining quality it seems safe to assume that most of this show's audience has already jumped ship. If you're still watching, it's probably because, having come this far you're grimly determined to stick it out until the bitter end. In either case, you have long since made up your mind.

But Dexter is still a TV series that is worth writing and thinking about. This is because it offers a particularly instructive example of the sad dynamics that cause a good show to go bad.

Yes: Dexter used to be a good show. Though it's difficult to imagine today, there was a time when Dexter could make a plausible claim that it was the best show on television. Back in 2006 the idea of a serial killer as a television protagonist was genuinely avant-garde, and each new episode unfolded with cinematic flair.

We'll always have the memory of those wonderful early seasons. That moment when the Ice Truck Killer's identity was revealed. The claustrophobic dread as Dexter was investigated in season two. John Lithgow's magnificent, spine-chilling, Emmy-winning performance in season four. Those were good times.

The first four seasons of Dexter had a neat thematic symmetry. Each season dealt with a different type of human relationship: family in season one, romantic love in season two, friendship in season three, and fatherhood in season four. Together, those stories formed a long arc that ended with the death of Dexter's wife, Rita. That fourth season finale was one of the most powerful, tragic episodes in recent television history: after four years of trying to connect with other humans, Dexter had failed completely, and destroyed his own family in the process.

If the series had ended after season four it would probably still be remembered as one of the best TV shows of the Noughties. Instead, its creators made the fateful decision to keep making new episodes, even though they had run out of interesting stories to tell. Over time, the villains became indistinguishable and the regular characters ossified into one-dimensional caricatures of themselves.

Which brings us to the eighth and final season, currently debuting on M-Net. If you are one of the hardy few who has stuck it out this far, perhaps in the hope of some sort of closure, then what can you expect?

Well, there's a new character. Dr Evelyn Vogel (Charlotte Rampling) is a neuropsychiatrist who seems to have been modelled on Ayn Rand, complete with an indeterminate European-sounding accent and a Nietzschean view of the world. The difference is that her übermenschen are murderous psychopaths rather than billionaire industrialists (though she assures us that there is some overlap between the two).

There's also a serial killer on the loose, with a tabloid-friendly nickname ("The Brain Surgeon"), and, as always, it's up to Dexter to stop him. But there seems to be some hidden connection between the killer and Dr Vogel. Could she, in fact, be the killer herself? Feel free to speculate on these questions, though I'm afraid the final resolution will be less interesting than whatever you imagined.

All of these narrative threads culminate in a series finale that is spectacularly bad. There's an implicit contract between the viewers and the writers that is formed during a long-running TV series: if we keep watching until the end they will reward us with a finale that provides closure and catharsis. Dexter reneges on this contract, with a finale that destroys established precedents, violates the basic rules of logic and sullies the memory of those early seasons.

So that's what you can expect from the last season of Dexter: more of the same, plus a finale that seems almost purposefully designed to annoy its audience. If you're determined to watch it anyway, then of course I can't stop you. In fact, I admire your steely determination! There's a certain tragic heroism in finishing something that you know will end badly.

But don't say you weren't warned.