Khutsong: This is what happens to criminals here 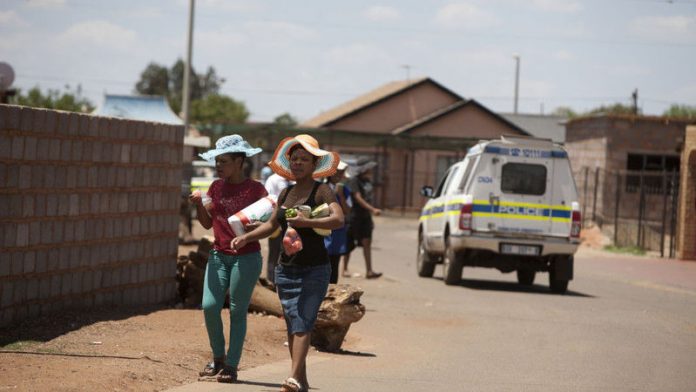 In the baking midday heat, a convoy of 10 police vehicles is winding its way around the streets of Khutsong. Its first stop is an informal garage where the officers pat people down and ask a few questions. They begrudgingly accept the presence of media. The police's target is a street next to a playground frequented by drug dealers. They stop anyone walking down the dirt road and pat them down too. Boxes in nearby spaza shops are lifted and searched.

The police are searching for any evidence that will identify the perpetrators of six murders that occurred on Sunday. The people were either hacked to death or necklaced – the act of forcing a tyre around a person's neck and lighting it so they burn to death.

The white and blue police vans are everywhere. Some drive the streets; others are parked in rows under the rare clusters of trees. The station is a hive of activity. The official word is that everything is now under control and visible policing has settled things down. 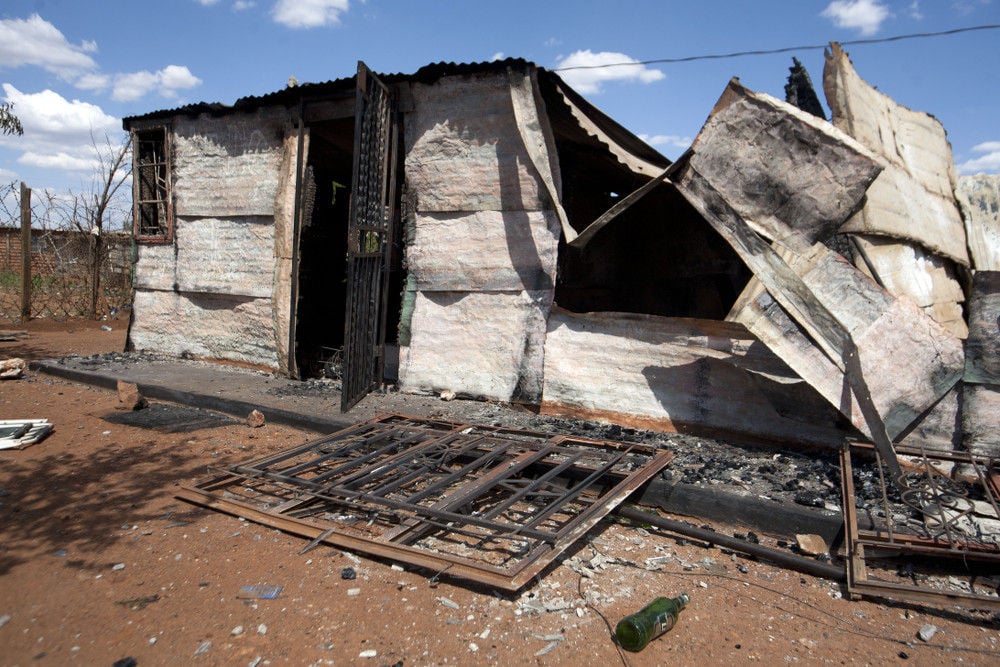 The local commander is busy in a meeting that has brought two dozen police cars bearing symbols from police stations all over Gauteng to the station. The police spokesperson is not available. Police Minister Nathi Mthethwa earlier on Monday had condemned the mob justice that was meted out, saying that the perpetrators will be arrested. "You cannot resolve crime through committing crime. It is simply unacceptable."

But locals say they did just that because the police were not protecting them from gangs that have been terrorising the community. A group of young men, sitting under the shade of a shop's zinc roof listening to loud music, say; "The gangsters got what was coming to them. There was a human braai here."

Like everyone else in the area they do not want their names on the record for fear of retribution or police investigation. "These gangs have terrorised everyone here. They rape, they rob, they do drugs and they think they are in charge. We showed them they are not now." One of the men mimics the sauntering walk of a "gangster". "Now they have their shirts tucked in and walk with respect."

Mob justice
The four were there on Sunday morning when 400 men met at the football field just down the road to talk about crime in the community. As the morning wore on, the large crowd broke into groups and went after the "gangsters".

Six people were tracked down and killed. One was a sangoma that locals accuse of having helped members of the local Cassanova gang. The house next to his was set alight by mistake by the mob, but he was also killed and his home now smells of burnt wood and all the zinc walls have collapsed.

A house further down the dirt side road suffered the same fate. Its occupant also died after being necklaced. Black burn marks on the dirt are the only things marking where they died with a jeering crowd surrounding them. 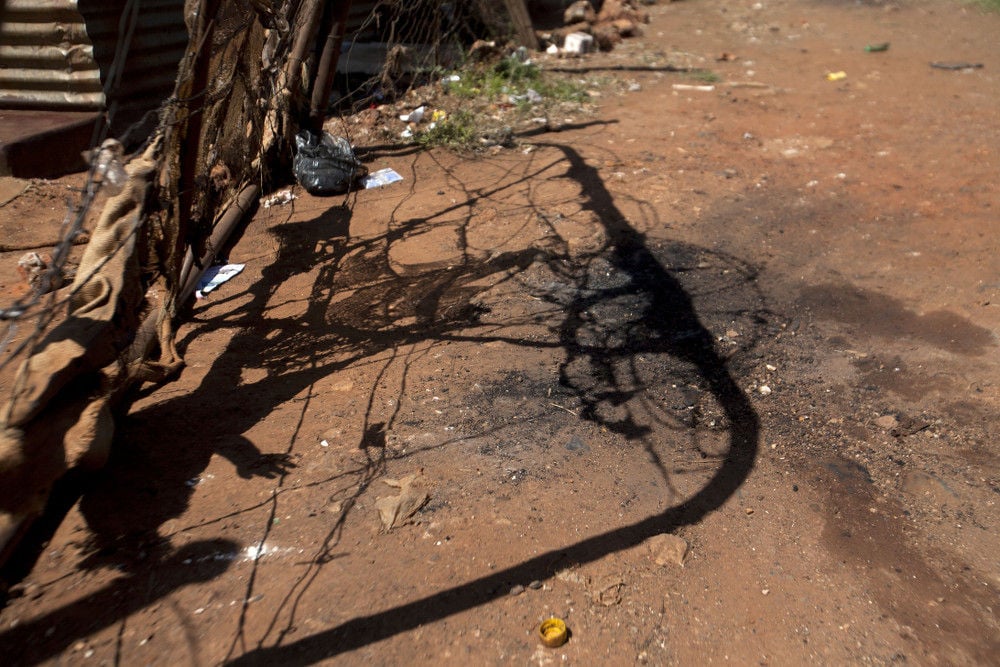 The crime scenes where a sangoma was killed. (Oupa Nkosi, M&G)

"These gangsters have attacked us with their pangas and their knives. I was robbed just down the road there and we live in fear of them," says a woman who just wants to be known as a "concerned resident". She is eager to show how the community extracted revenge, showing a video on her pink cellphone of people being set alight while people danced around them. Loud music plays in the background of the video.

She wants to share the video and pictures, so she asks around if anyone knows how to do so. In the shade of a nearby shop she finds a friend who has better quality pictures, and he tries to send them over bluetooth.

"This is what happens to criminals here," he says. The pictures are of three of the murdered community members – their skin burnt and peeling while bystanders take pictures. 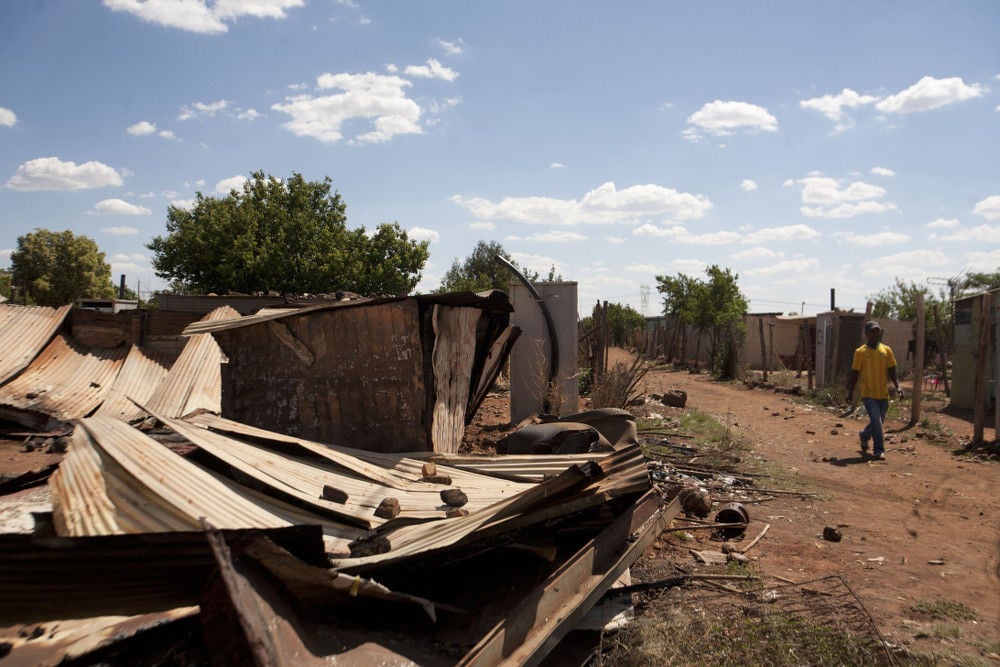 Gangs
The accused gangs have up to 50 members and often rob large groups of people – closing down a shebeen or a street and telling everyone to put their valuables on their floor. "The one Sunday a few weeks ago, they even robbed a church – a church! They have no respect for anyone and destroy our lives," says another woman.

Nobody seems to have any time for the police. "They are too afraid to help us. The one time the gangs were dealing drugs in the park and we asked them to do something. They came. But they said they were too afraid to chase them away," says the woman with the pink cellphone.

Other residents laugh at the way the police normally patrol, sticking to the tar roads that go around large chunks of Khutsong and not the dirt paths and roads between them. "The police did not stop these criminals so we had to show them fear," says a woman holding her baby.

But with their point made, community members seem to have moved on from the violence of Sunday. People walk the streets and hardly look when they pass one of the burnt-down shacks. The only thing that does attract their interest is the endless police convoys and the sporadic groupings of journalists.

"The point has been made to the gangsters so now things will return to normal. Khutsong is a good place, this isn't Dobsonville," says one of the men sitting in the shade listening to music.

Hashtags bear a strange fruit: The visual terror of the #PhoenixMassacre