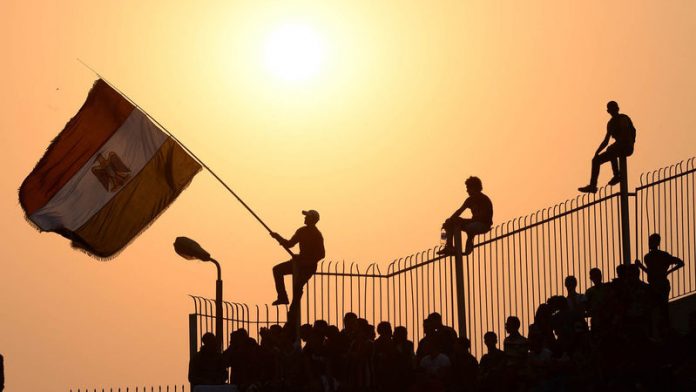 Hundreds of supporters of Egyptian club Al Ahly briefly clashed with police Sunday outside a Cairo stadium ahead of the African Champions League final.

Police used tear gas to disperse the crowd as they threw rocks and tried to push their way into the stadium, many with no tickets.

The scene raised fears of problems at the World Cup playoff between Egypt and Ghana in Cairo in just over a week's time.

A police car was damaged in the clashes before Al Ahly was due to host Orlando Pirates in the second leg of the club championship decider. Traffic was also briefly disrupted outside the Arab Contractors stadium in east Cairo during the melee.

It is the first major match with spectators in Cairo since February 2012 when deadly soccer violence in the Suez Canal city of Port Said left 74 people killed, mostly Al Ahly fans. Games have since largely been played behind closed doors and away from Cairo.

Pushing and shoving
Following the scuffles outside the stadium, police put up metal bars to organise fans' access to the bleachers. Fans raised their tickets up in the air and streamed into the stadium that holds around 20 000 fans.

Clashes restarted briefly, prompting police to lob another round of tear gas.

Deputy Cairo police chief Ezzat Zahran told the private TV station CBC that some fans tried to enter without tickets and tear gas was used to minimise the pushing and shoving outside the stadium.

There were no reports of injuries.

Inside the stadium, the bleachers were packed. Al Ahly fans sang a song for the colleagues who died in the 2012 violence before the match began, and put up a poster remembering them. A few dozen Orlando Pirates fans were also in the stadium. – Sapa-AP