Rhino farms: Win-win or hell, no? 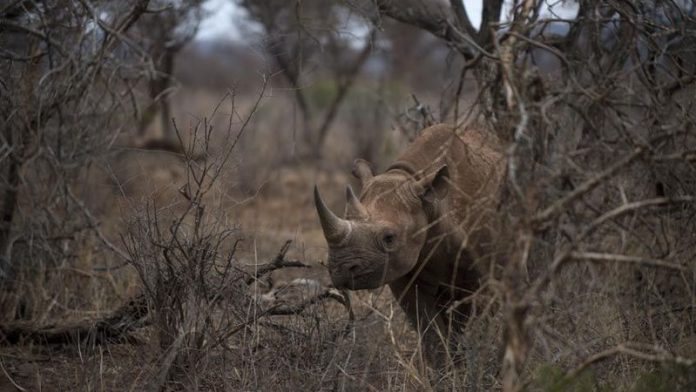 With the death rate of rhinos set to exceed the birth rate in a few years, local groups are desperately looking for a way to stem poaching. The government is pushing for the legalisation of the trade in rhino horn, which has been banned for three decades.

Julian Sturgeon, executive director of nongovernmental organisation Resource Africa, said his group is working with SANParks to test a rhino farming project. "Unless we make a decisive intervention, it is bye-bye rhino without a question."

Several farms located near rural communities would each hold 64 adult rhinos. This would create 108 full-time jobs and make R12-million a year in areas where there is no other employment.

"This would be by far the most effective type of farming on the planet and the beauty is that it's a win-win scenario."

John Hume, the country's largest private rhino owner, said a legal trade would save the rhino from extinction. The international ban and the local moratorium on trade in 2009 had only pushed people to the black market.

"We need to encourage everyone in the country to breed rhino and the only way to do that is to legalise the trade."

He said this would make a living rhino more valuable than a dead one, because a male could yield up to 70kg of horn in its lifetime.

Dawie Roodt, an economist and head of the Efficient Group, said a live rhino can be bought for R300 000 but a horn could be sold in Vietnam for R10-million.

"That is a massive incentive. Where else would you get a return like that?"

Nothing else is working, he said, so another solution has to be adopted. By gradually supplying the market with farmed horn, South Africa could stimulate local economic growth and create employment. People would then protect rhinos as they would be important for their own futures.

Professor Morné du Plessis, the chief executive of the World Wide Fund for Nature in South Africa agreed that "the current position is completely untenable", but said none of the solutions proposed so far gave him any confidence that legalised trade will work in practice.

"The theory is fine. But there are some very fine predictions on very little data."

Legalising the trade based on the current information is very risky, he said, and all the arguments being put forward only look at patches of the overall picture. "There is no practical pathway that we can confidently go for. Panic alone is not a big enough excuse to make huge decisions."

Karl Ammann, a journalist who has done work on the consumer countries in Asia, said the international community, especially groups such as Interpol, doubt South Africa's ability to control its game farmers, given how often they have circumvented trade bans to sell horn.

"A big segment of the international community says: ‘You do not have things under control. How corrupt will your system be? How will you control it?' "

This means there will likely be significant opposition to any attempts to legalise the trade, he said.

South Africa is planning to ask for a once-off sale of rhino horn when the Convention on the Trade in Endangered Species next meets in 2016.